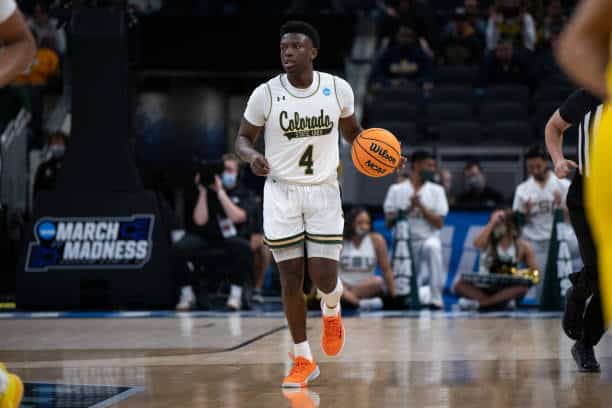 The Colorado State Rams look to continue success as they come off one of their best seasons in school history.

The countdown is officially on. For the second straight year, CBB Review has ranked the top 100 teams in college basketball heading into next season. We will reveal the next team daily until we get to number one. Our number 73 ranked team are the Colorado State Rams.

There aren’t too many college coaches that I’d trust more to figure it out than Niko Medved. The Rams bring back a good bit of experience in addition to a few grad transfers that should add some much-needed depth.

Stevens will be one of the most electric players in all of the Mountain West Conference. He put up really great numbers last season for Colorado State, and with Roddy gone, even more of the burden will be put onto Stevens. He is one of the better playmakers in all of college basketball, averaging 4.7 assists per game last season. He is a maestro in the pick and roll, the action he ran the most last season. Stevens has a good pull up game, but can also create for others out of the pick and roll.

Stevens is fearless with the ball but also careful. He had a very good assists to turnover ratio. Colorado State will surround him with shooters, and an extremely intriguing pick and pop option in DII transfer Patrick Cartier. If Stevens keeps close to his efficiency as last season while increasing volume, he has a legit chance to be Mountain West Player of the Year.

The grad transfer from Illinois State will add a proven scoring punch for the Colorado State Rams. He was one of the better 6th men in all of the mid-majors last season when he came off the bench. This season I expect him to not only start but have a lot of responsibility from the jump. He prefers to catch and shoot on the perimeter, where he was elite last season shooting 40.9 percent from 3. However, he is also capable of putting the ball on the ground and maintaining the advantage against a bent defense.

With as ball dominant of a player as his backcourt mate Stevens is, Strong will have the perfect role set up for him to be that perimeter threat and secondary ball handler. Stevens projects to also be a very solid perimeter defender, something Colorado State will need.

Head Coach Niko Medved is one of the underrated offensive minds in the game. He understands the importance of the 3, and he puts his players in positions to succeed on that end. The Rams were a team that shot extremely well from both three-point range and inside the arc last season while turning it over less than almost all other teams in D1. Look for this offense to flourish once again.

The Colorado State Rams lost a huge part of their team, but that does not automatically mean that they won’t have any success this year. They won’t be favored to win the Mountain West, but they have the talent to get it done. This will be a team that will need to use the out-of-conference to gel as they have multiple transfers that will play big minutes.

There are definitely some questions surrounding the Rams this season though. They are not a super deep team. Only 6 players played consistent D1 minutes last season. Patrick Cartier comes from Hillsdale College, a DII school. He had an amazing year there that led him to be a DII All-American. If his game translates, he provides needed size to the squad that is also lethal from downtown.

There is also high octane scorer Joe Palmer who transferred from DIII Augsburg. This is all to say that Colorado State has some unproven pieces aside from their top two players. Look for sophomore Jalen Lake to be a candidate to make a second-year jump for Colorado State.

In the end, I think Niko Medved is one of the more underrated coaches in college. He has led the Colorado State Rams to 3 straight 20+ win seasons, and he will look to make it 4 in a row this year.