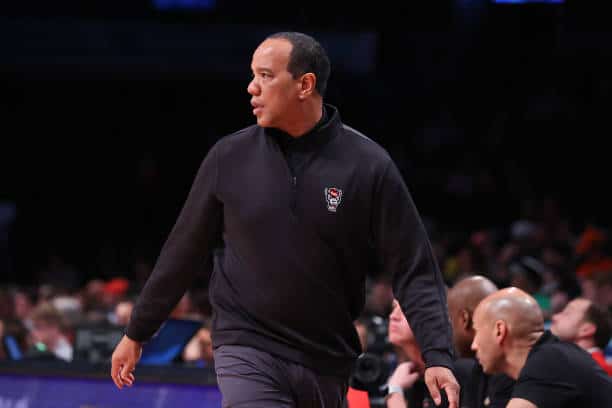 CBB Review is once again ranking the top 100 teams heading into the 2022-23 season. Each day we will reveal the next team until we reach the team slotted at number one. Coming in ranked number 72 are the NC State Wolfpack.

Head coach Kevin Keatts made a great first impression in the NC State program, winning at least 20 games in each of his first three seasons. However, struggles have ensued and many question the long-term fate of this current staff.

In 2021-22, the NC State Wolfpack finished just 11-21 but it was not simply a matter of talent discrepancy. Dereon Seabron and Terquavion Smith were two of the most productive scorers in the conference, yet the team struggled to defend and convert in crunch time. It was simply not a fundamentally sound team, so they left a lot on the table.

Looking ahead to next season, Keatts has compiled another talented group of players. It will be a matter of time to determine whether he has made the necessary adjustments to his style.

On one hand, Terquavion Smith was among the leading ACC scorers last season with 16.3 points per game. On the other hand, he shot under 40% from the field. I tend to buy more into the volume number though.

Smith showed the ability to make deep, contested shots. There were many instances where he was the only player on the court capable of getting a bucket. He was forced to take many undesirable shots by default, which led to low-efficiency numbers.

Still, there is a reason Smith was almost considered NBA-ready this summer. An elite playmaker with a quick release, the rising sophomore returned to school to work on his finishing ability around the rim.

Since his first season at Virginia, Morsell showed plenty of flashes, but not enough consistency. After transferring to the NC State Wolfpack, Morsell improved his three-point efficiency numbers from under 25% to a more respectable 35.0%.

This is year four for Morsell in the ACC and he must prove that his upside will come into fruition. The Wolfpack have two great offensive guards in Joiner and Smith but if Morsell explodes as another option, they will be a load to handle. Plus, Morsell has the athleticism and length to guard some of the better wings around the conference.

Defense is where the Pack lost many of their games last season. Oftentimes, they would run into a hot shooter and do very little slow them down.

If the NC State Wolfpack wants to compete for a tournament spot next season, they must focus on impeding ball movement and increase the overall intensity on that end.

The good news is this team does not lack length. Jack Clark can be another x-factor as 6-8 forward who can defend in the backcourt as well.

It will be an uphill battle to climb for the NC State Wolfpack in the ACC. This team has capable pieces but other programs can match them. With the offense functioning at an above average level last season, their fate will rely more on what happens on the other end of the court.

Ceiling: NCAA Tournament Round of 32