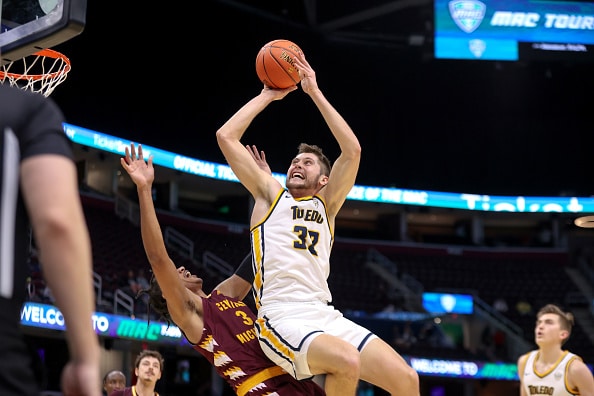 The Toledo Rockets are ready to finally get over the hump and get to the NCAA Tournament in 2022-23.

CBB Review is once again ranking the top 100 teams heading into the 2022-23 season. Each day we will reveal the next team until we reach the team slotted at number one. Coming in ranked number 76 are the Toledo Rockets.

Toledo has won at least 13 games in Mid-American Conference play four of the past five seasons, including an incredible 17 wins a season ago. The Rockets have been right on the cusp of an NCAA Tournament appearance the past two seasons, but have fallen just short in the league tournament.

Now, this group looks to take that final step without their leading scorer from a season ago in Ryan Rollins. However, the other four starters are back, and that experience has them poised to barely miss a beat heading into the new season.

Even though the loss of Rollins hurts, the Toledo Rockets aren’t left with the cupboard bare when it comes to scorers. JT Shumate and Setric Millner Jr. proved to be a lethal combination in the paint last season, with both averaging 15 points per game. Shumate gets the nod here as the MVP because he possesses just a tad more when it comes to being an all-around player.

Aside from his scoring, Shumate led the Rockets in rebounds and assists, proving to be the type of bruising big Toledo needed. More weight will be placed on both his and Millner’s shoulders, but they’re up for the task.

Just because the focus was on the frontcourt in the prior section doesn’t mean the Toledo Rockets are lacking in backcourt talent. However, the loss of Rollins means someone has to pick up the production from this area of the floor. RayJ Dennis is certainly capable, but he is at his best when he is being the floor general for this squad.

Instead, enter Tyler Cochran, who is at his third MAC school in three years. Cochran averaged double-figure scoring at his prior stops of Northern Illinois and Ball State, so he’s more than capable of doing that at Toledo as well. He knows what it takes to play in the league, so that familiarity should only make him more dangerous whether he finds his way into the starting lineup or coming off the bench.

There were barely any glaring weaknesses when looking at Toledo last season. However, one thing that stood out was the lack of deep balls the Rockets launched. Now, when you have two dominant big men like Shumate and Millner down low, it makes it easier not to have to rely on scoring from the three-point line.

However, having that threat would only make Toledo more dangerous than they already are. Shumate and Millner were actually the Rockets’ best threats from beyond the arc last season, so establishing at least one guard that can hit it consistently would be ideal for the upcoming season.

The bottom line here is that the Toledo Rockets are once again poised to be the pre-season pick in the MAC. This is not unfamiliar territory for most of the guys on the roster or Coach Kowalczyk. What is unfamiliar over the past few seasons is being able to finish the job come MAC Tournament time.

Let’s be clear here: the Mid-American Conference is one of the premier mid-major leagues out there, and its depth has clearly shown itself with the way Ohio and Akron performed in the prior two NCAA Tournaments.

However, Toledo can be just as dangerous and is ready to put that on full display. The Rockets have yet to put out their full non-conference slate but expect them to go out and find some solid match-ups with power conference teams and other solid mid-majors in an effort to build a quality profile. The goal is to make 2022-23 the year that the Toledo Rockets finish the mission and land safely into the March Madness field.

Projected Postseason Appearance: Round of 64