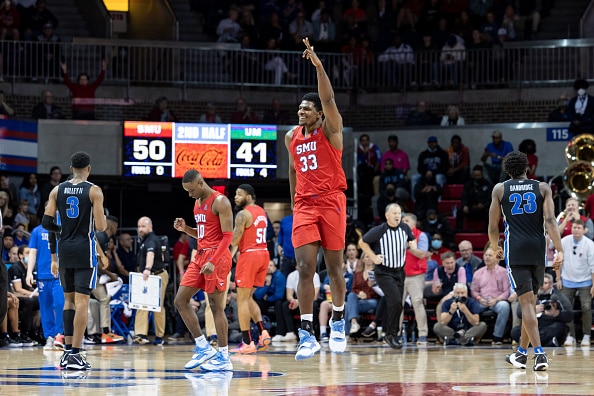 A dart throw in the American Athletic Conference, this SMU team is full of chances after losing key players and its coach.

The countdown is officially on. For the second straight year, CBB Review has ranked the top 100 teams in college basketball heading into next season. We will reveal the next team daily until we get to number one. Our number 83 ranked team is the SMU Mustangs.

The SMU fans are going to see a very different team than it did last year. With the loss of Kendric Davis, Emmanuel Bandoumel, the Weathers’ family, we will see a much younger inexperienced team. The biggest move of the offseason for SMU was the addition of Rob Lanier from Georgia State. Lanier brought in some experienced players from the portal and was also able to keep some players from the Jankovich led team. It will be interesting to see how not only this coach but also this team takes on the challenge of the AAC gauntlet.

Starting his career at Louisville, he had a massive leap between his freshman and sophomore years. Last year amid the unrest in his Louisville team, Williamson only saw six starts and was a rotational player. Williamson joins a team where he will have the opportunity to be a starter and really show his talents. He can shoot the 3-pointer, makes smart passing decisions, creates shots for himself and others, and knows what shot to take. Having the platform he will at SMU, Williamson will likely be a fan favorite as he will dominate at his position.

With the massive change to his team, Nutall has the opportunity to separate himself as a leader. He has the talent and ability, but if he can show it to his team and be a reliable piece, this team will maintain its impressive home winning record. Nutall left Sam Houston State two years ago to join the SMU Mustangs. He is an absolute star and could really show out. Learning from Kendric Davis, he now has the opportunity. Being one of the more experienced players, he will be a big cog and if he can’t get this team going, it will be a long year for SMU.

The SMU Mustangs were a team that focused on isolating one-on-one plays, which shows in the team’s defensive turnover percentage. While the Mustangs were a team that focused on tough defense and forcing the other team to catch up, the team did not have a hunger to fight for the ball. Not forcing other teams to pass and to take bad shots is great when it works, but this team needs to force turnovers. This year, that will be a change a new coaching philosophy will require players to have some fight in them and go after loose balls. Coach Lanier coached the Georgia State Panthers last year, which was one of the team’s strengths.

Non-con schedule is out, and we love what we're seeing, Mustangs! Thanks to @chirorehabtx for the assist.

Check out all the stops below ⬇️ and always, #PonyUpDallas‼️ pic.twitter.com/ChHeEadRR9

After finishing second in the AAC last year, the SMU Mustangs have a lot to live up to. After making a trip to the NIT last year, Coach Lanier has a lot to do this upcoming year to get them back to that spot or better. With a tough non-conference schedule, the opportunity to create a strong NCAA resume before the start of conference play will be key. With two easy games at home again Paul Quinn and Texas A&M-Commerce, there is still time for fine-tuning and will be taken seriously by players and staff.

The team will travel to a tough basketball school in Dayton, then host New Mexico, Evansville, Louisiana and Lamar. It then takes on Texas A&M at home, which will be a key game for the two Texas schools. The Mustangs then have a home game to bounce back against Jackson State and a tough Arizona State team. Then, it has another in state game against TCU on a neutral court. The team takes a week off before traveling to Hawaii for the Diamond Head Classic for Christmas.

Coach Lanier and the SMU Mustangs will have a battle on its hands in almost every game this year. Fighting through a tough conference with some juggernauts in Houston and Memphis with a familiar SMU name in Kendric Davis. This team will need to gel quickly and become a family before it is battle-tested, but this will be a definite change in program styles with Lanier coming in. Here is to hoping that SMU makes the right decision and starts its new dynasty.