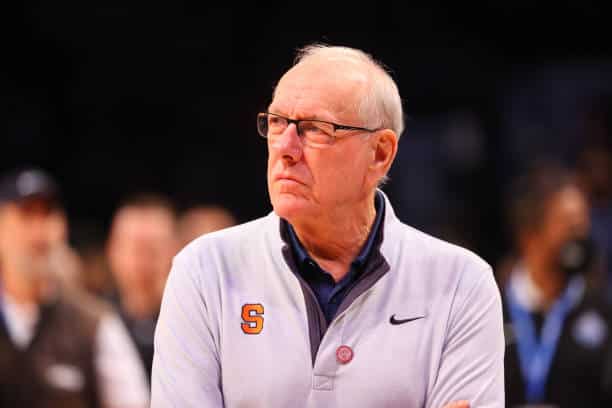 The Boeheim brothers move on, but the Syracuse Orange still has two talented seniors remaining in the starting lineup.

CBB Review is once again ranking the top 100 teams heading into the 2022-23 season. Each day we will reveal the next team until we reach the team slotted at number one. Coming in ranked number 84 are the Syracuse Orange.

Last year’s Syracuse Orange team made history as Jim Boeheim coached his two sons, Buddy and Jimmy. While the storylines were second to none, the team finished with a losing record – the first in coach Boeheim’s career. While he had been quoted on how special the season was, it’s clear that the Orange as a program are in need of a refresh. They’ll surely get that this season, as the roster is dominated by freshmen and unproven returners.

While most may point to sharpshooter Joe Girard III, I’m actually going with the other senior on the team, Jesse Edwards. Edwards turned into a dominant ACC big man, improving so much across the board, it seems like a rook he wasn’t named the ACC’s Most Improved Player. NC State’s Dereon Seabron won it instead.

At the very least, Edwards showed that he can not only be the starting center for the Syracuse Orange but can legitimately shine for SU in the frontcourt. His scoring improved drastically and his rim protection was arguably the best part of his game. Expect another monster season from Edwards.

The Orang has so many freshmen that will be make-or-break players. Judah Mintz is likely to be counted upon in a major scoring role. Chris Bunch and Justin Taylor could both start at small forward throughout the season. But sophomore Benny Williams is the one Syracuse Orange player that has to turn it around.

Last season was a whirlwind for Williams, so came in as one of the highest-rated recruits in Cuse’s history. He struggled mightily on the court and often battled questions of whether or not he would consider transferring out of the program. But Williams stayed consistent with his approach – he came to Syracuse University to play basketball. This year, even more pressure will be on Williams to perform.

Can the Orange repeat the offensive showings they had last season? Buddy, Cole, and Jimmy had no trouble scoring the basketball, as the main reason why they finished so high up in adjusted offense last season. But this year looks to be different. JG3 and Edwards are the only proven scorers back and Syracuse didn’t pick up any transfers to help mend the losses.

That means either the two seniors will have to really turn it up, or the Orange are going to be led primarily by freshmen. Either way, this has the feeling of the 2018-19 Syracuse Orange team that only averaged 69.7 points per game.

How can this Syracuse Orange team get the program back to where it once was? It’s been a whole eight seasons since SU last won at least 25 games in a season. Of course, a classic Jim Boeheim schedule could help. The Orange have so-called easy games against Lehigh, Colgate, Northeastern, Oakland, Monmouth, and Cornell. The biggest tests are Illinois, Richmond, St. John’s/Temple, and Bryant. Right now, it looks like they could go the entire non-conference slate without facing a team in the AP Top 25.

One plus about this Orange roster is the guard situation. Symir Torrence found his own right at the tail end of last season, averaging 10 assists in the team’s two ACC Tournament games. With Torrence at the one, it would allow Girard, who has unlimited range, to play the two. Even though he’s undersized, his extended range would allow for more spacing in the halfcourt offense which could help the less experienced guys – and Edwards – get easier buckets.

Usually, Jim Boeheim finds a way to make more out of less. Last year, it seemed like the opposite, as no amount of changes on defense could save Syracuse. This year, it’s almost like the Cuse hit refresh, which could be exactly what they need to move the needle.