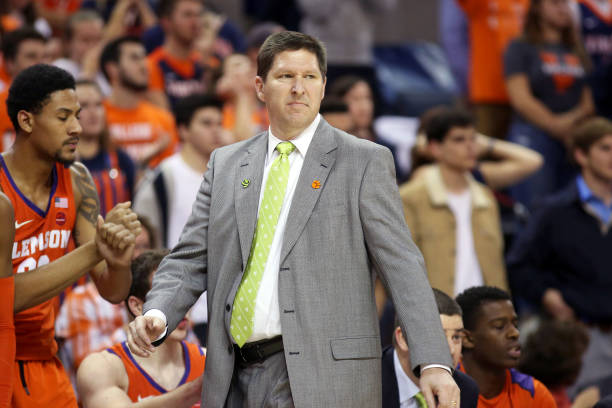 While the seat around head coach Brad Brownell grows hotter, the Clemson Tigers will have to deal with the loss of its best player, PJ Hall.

CBB Review is once again ranking the top 100 teams heading into the 2022-23 season. Each day we will reveal the next team until we reach the team slotted at number one. Coming in ranked number 85 are the Clemson Tigers.

Clemson beat their 2020-21 win total by one game last season, but played 9 more games in the process, slipping from a tournament team to a second-round exit in the ACC tournament and no postseason bid. Brad Brownell’s twelve-year tenure in Clemson has been painted with both highs (Sweet Sixteen appearance) and lows (just 3 NCAA Tournament appearances in 12 years). Time will tell if this Clemson Tigers team can stack up with their recent tournament successes.

Super-senior Brevin Galloway is on his 3rd collegiate team in his 6th year playing. On a Clemson Tigers team that lacks in-game experience, Galloway can be a leader for the program, not just on the court but also in the locker room. He was not 100% last season at Boston College after recovering from a torn ACL playing for College of Charleston, but still managed to score over 8 PPG. Fully healthy entering the 2022-23 season, his abilities will be on full display for the Tigers this year.

An electric scorer behind the arc, Galloway is adept at creating separation from his defenders and hitting shots at angles most guards could not even attempt. While he can pass the ball decently, most of Galloway’s value comes from behind the arc, not just shooting but also from his perimeter defense. After last year’s Tiger team only shot 36% from three, Galloway should help them improve on that mark. From Anderson SC, the local product should make his last college season his best yet, from the same school his brother played tight end for. On another note, Galloway has been very active in the NIL department since athletes were allowed to sign deals, including one with Mercedes-Benz.

Middlebrooks will likely slide into the starting center spot with PJ Hall’s injury, and he’ll need to step up his game if the Tigers want to keep up the same efficiency they had at the position last year. While his stats weren’t too eye-opening in either direction, it’s derived from a very small sample size (6.4 minutes per game). Regardless of how well Middlebrooks improves from his minor role last year, he’ll likely need time to adjust to the rotation early in the season. The key for Middlebrooks will be to watch his fouls, as he averaged 7.2 fouls per 40 minutes.

Analytic to Know: 291st in blocks per game last season

Clemson’s defense inside wasn’t particularly impressive, averaging only 2.3 blocks per game. What’s even more concerning is that 1.3 of those blocks per game came from PJ Hall, with Hunter Tyson coming in second at just 0.3 per game. While the offense may take a hit with Hall’s absence, the larger impact will be felt on the defensive end. The Tigers need a stopper down low, and that could be Middlebrooks. For Clemson, it doesn’t matter who steps up, as long as someone does it. Freshman Chauncey Wiggins could also play a role in the frontcourt rotation.

The Clemson Tigers could be two very different teams this year. On one hand, besides Galloway, Hunter, and Tyson, they’ll need to rely on mostly homegrown talent that haven’t played in big games yet and haven’t impressed on the stat sheet, or freshmen that haven’t seen action in a collegiate game yet. The loss of PJ Hall will also force Brownell to play a much-different rotation than expected coming into the year.

On the other hand, the aforementioned trio of Galloway, Hunter, and Tyson have impressed on the college level before, have experience, and can be leaders for the Tigers this year. They also bring in a very talented freshman class, headlined by RJ Godfrey. Offensively, the Tigers should be improved compared to last year, and can spread the ball around. In what could amount to the team playing for Coach Brownell’s job security, a spirited squad could pull some major upsets.