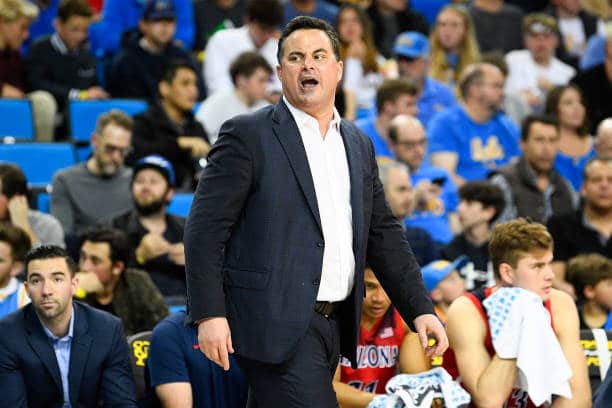 The 2022 Gavitt Games were released with some shock, with Creighton, Illinois, Michigan, and UConn all left off this year’s slate.

The Gavitt Games pit the Big East against the Big Ten in a conference battle that honors the late Dave Gavitt, who was the first commissioner of the Big East Conference.

This year’s Gavitt Games slate features some intriguing games, but notably leaves off Creighton, who is expected to be a top ten team in the country to start the season.

Also not a part of this year’s competition are Illinois, Michigan, and UConn – three other squads with rosters primed to make it to the Big Dance. Also not included are Maryland, Ohio State, Providence, Rutgers, and Wisconsin. However, despite the omissions, the battle is still full of must-see television during November.

This game features two teams that both finished below .500 in 2020-21, with the Hoyas only racking up a grand total of six wins. It’s easily the least attractive Gavitt Games matchup, but there are still a few points to look at.

The Hoyas’ outlook is arguably the bleakest of the two conferences. Georgetown lost its two top scorers, as Aminu Mohammed left for the NBA after his freshman year and Donald Carey transferred across the DMV to Maryland. Patrick Ewing’s squad will be led by Dante Harris and Maryland transfer via Georgetown, Qudus Wahab. Also expected to be key contributors are sophomores Ryan Mutombo and UConn transfer Akok Akok.

The top player to watch is on the Northwestern side, as Boo Buie returns for his fourth season with the Wildcats. Last year, the 6’2″ guard averaged 14.1 points per game and could contend for a first-team all-conference nod with another strong season.

While the Wildcats return a star and the Hoyas bring in some intriguing transfers, neither team is getting a lot of serious buzz, due to the trajectory of both programs. It’s sort of a “see it or believe it” with either team, and this game won’t move the needle, no matter who takes it.

This should have been the Andre Curbelo revenge game, but Illinois isn’t in this year’s rotation, so instead we have to settle for Nebraska, a team the former Illini guard almost posted a triple-double against.

Curbelo and defensive stopper Posh Alexander form what could be the best backcourt in the Big East, along with a frontcourt that features 7’1″ freshman Mohamed Keita. Also coming in on the wing is DePaul transfer David Jones, who averaged 14.5 points, 7.4 rebounds, and 2.4 assists last year with the Blue Demons.

With no Bryce McGowens or Alonzo Verge, Fred Hoiberg will turn to C.J. Wilcher and Derrick Walker to lead by example as the top returners.

This matchup might not be as close, but St. John’s is just a better draw than either Georgetown or Northwestern, given they have an above-averaged chance at making it to March.

Even with David Jones leaving DePaul for a fellow Big East school, the Blue Demons’ roster has some young star power that makes them an interesting team in the non-conference.

Zion Cruz is a top-100 recruit and Umoja Gibson averaged 13.3 points at Oklahoma last year and will play in his SIXTH collegiate season in 2022-23.

This matchup also pits two second-year coaches as Tony Stubblefield goes up against Ben Johnson behind the lines.

Johnson returns Jamison Battle, who averaged a cool 17.5 points and 6.3 rebounds for the Gophers last season. Dawson Garcia also comes over from North Carolina, after originally starting out at Marquette. Both of them should have a huge impact down low against a DePaul squad that was somewhat height challenge last season, with only two rotation players over 6’9″.

Overall, both teams are a while away from contending in their conferences, although the battle of two young coaches who seem to be taking their teams in a positive direction is something worthwhile. Plus, it should be a better contest than St. John’s and Nebraska.

Finally getting into some more storylines, Thad Matta’s return to Butler will be huge come November, and especially against a Big Ten opponent in Penn State.

The Nitany Lions also have a lot to be excited about. 247Sports lists their incoming freshman class as borderline top 25 in the country, filled with talented players at multiple positions.

However, the return of Myles Dread, Jalen Pickett, and Seth Lundy tops all of that, giving Penn State a legitimate core to wins big games like this and have a resume fit to be picked on Selection Sunday.

Butler also has some experience coming back, as juniors Chuck Harris and Myles Tate team up with Purdue transfer Eric Hunter Jr. for a solid backcourt in the Big East. Manny Bates also comes in from NC State as the likely starting center for the Bulldogs.

The biggest thing knocking this game down is the lack of recent success from either side. But if you really look at both clubs, they have everything it takes to be top teams in their respective conferences.

Year two of Shaka Smart might be a bit more challenging. Justin Lewis and Darryl Morsell were two of the biggest losses in the conference, as the two stars combined for about 30 points per game for the Golden Eagles last season. Instead, Kam Jones and Tyler Kolek will take the reigns under Smart’s system. Doubts about Marquette’s overall talent are there, but his system has at the very least proved winning ways, even if they don’t always end in Final Four runs like at VCU.

Purdue’s also in jeopardy of a down year, as Jaden Ivey and Trevion Williams said their goodbyes to West Lafayette, Indiana. Sasha Stefanovic and Eric Hunter Jr. are also gone, so it leaves Zach Edey and Mason Gillis as the lone players who were key contributors on last season’s team.

The biggest plug for this game is the location. Both teams battle over the midwest, with Marquette practically located right smack dab in the middle of Big Ten country. But as far as the game goes, neither team is looking as fresh to start the next season as they ended the last. It also looks like one of the most even matchups in these Gavitt Games.

Seton Hall made headlines this offseason as Shaheen Holloway returned to his alma mater after leading fellow North Jersey school Saint Peter’s to the Elite 8. He takes over a Pirates squad that returns five of its top eight scorers from a year ago, which his remarkable given the coaching change. The Hall also brings in a slew of transfers, including Al-Amir Dawes and Femi Odukale, both who averaged double-digits in scoring at the power conference level in 2021-22.

A year after losing Luka Garza, Iowa loses another once-in-a-lifetime players, as Keegan Murray went fourth overall to the Sacramento Kings in the 2022 NBA Draft. His brother Kris will try and fill those big shoes, along with another competitive Hawkeyes roster that should feature a lot of knock down three-point shooters.

It is worth noting that although neither team has any remaining players, the two squads did face off in the Gavitt Games in 2016 with the Pirates winning 91-83.

The Gavitt Games may not have a true rivalry, but this is as close as it gets. In steps Sean Miller at Xavier, ready to face his brother Archie’s old team in Indiana. Unfortunately, this game is at Xavier, or else the environment might have been as good as it gets in college basketball next season.

Don’t worry – it’ll still be top notch. Mike Woodson’s Hoosiers look primed to be right at the top of the Big Ten. Trayce Jackson-Davis is one of the top returning players in the country, and will do so along with Xavier Johnson and Race Thompson for what seems like a “work left to be done” type of move. A top ten recruiting class also gives the Indiana loads of momentum to really have the season they’ve been craving for decades.

Meanwhile, Xavier’s returning core is nearly unblemished, as Adam Kunkel, Colby Jones, Jack Nunge, Kyky Tandy, and Zach Freemantle all decided to come back to Cincinnati for another season together.

Both squads are contenders to not only finish high in their respective conference standings, but should also make appearances in the national rankings. That type of non-conference game always draws eyes and makes it one of the marquee matchups in the 2022 Gavitt Games.

Take one look at the schedule of the 2022 Gavitt Games and you know right away this was the game both conferences wanted as the headliner. It appeals to the casual college basketball fan, but also has interesting tidbits that make it stand alone.

Of course, a Jay Wright vs. Tom Izzo coaching standoff would have been the best selling point, but we’ll have to settle for Kyle Neptune instead. Neptune replaces Wright as the new head coach of the Wildcats and every sign points to him as a blossoming star in the business.

Both teams actually lose a lot of players from last year, with Collin Gillespie as the most notable name in the college ranks. However, like usual Nova and Spartans teams, they’ll re-load. We might not exactly know who will be the stars for these young teams right now, but come November, it will be apparent.