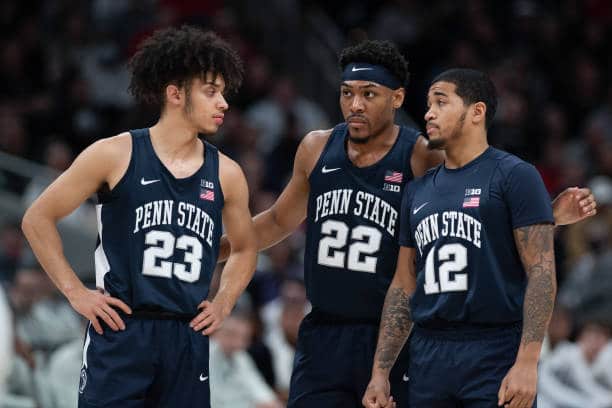 Njie comes into a Penn State program with a second-year coach in Micah Shrewsberry and he’s ready to work his butt off for Penn State.

Known as a hard worker, Njie’s made a huge leap as he continues to add on different abilities to his game, especially with post-play. While expectations may be lofty for the second-highest-rated recruit to ever commit to Penn State, Njie will ultimately compete for starting minutes. The 6-foot-8 big man is primarily up against another undersized center in Jevonnie Scott, who averaged more fouls per game than points per game last season.

Njie will be forced into a spot going against grown men in the Big Ten, so his work ethic and strength will be put to the test on a nightly basis right from the beginning.

Long term, he has the potential to turn into the next great Big Ten big man and put Penn State basketball back on the map. His work ethic and strength are unmatched and that will be the key to Njie’s success as a player.

Jameel Brown comes in as one of the smoothest players to touch a basketball in the class. He has length exceeding most guards, allowing him to play small forward if needed. Overall, Brown’s game is solid, as he can drive to the hoop using crafty moves to get around defenders, but isn’t a knock-down three-point shooter just yet. Brown’s length helps best on the boards and in the press, giving Penn State a versatile defender.

Coming in this season alongside Kanye Clary, Brown will slide into the backup two spot, with both the point guard and backup point guard spots being taken. Dallion Johnson will finally be able to take over the two, but if things get sloppy, Brown has every opportunity to steal more minutes and even the starting spot this season.

Down the road, Brown has the makings of a solid starter who could eventually become a top scoring option if he adds more attributes.

Clary comes into Penn State as one of the most accomplished high school players. He was a 2000-point scorer, a four-year team captain, and a four-year team MVP at Massanutten Military Academy in Woodstock, Virginia. Clary is a score-at-will guard averaging 25.5 points his senior year.

A kid who can shoot at will from any range. Clary is also very unselfish as he averaged 7.2 assists per game his final year of high school. On the defensive side, Clary is like an annoying horse fly, always right there on top of you – which helped him averaged nearly two steals and over six boards a game at 5’11”.

Coming in he will compete for the backup point guard job with the starting job belonging to Jalen Pickett.

He could compete for decent minutes this season, but given Pickett is a senior, Clary’s outlook for the future is bright.

Mahaffey comes in at 6’5″ with shooting guard and small forward skills. He’s known for his ability to defend, with great length for his size. On offense, Mahaffey plays more around the basket, using his athleticism for easy lays and dump-ins.

Realistically, Mahaffey won’t be a part of the Penn State rotation as a freshman, and he could be redshirted.

But down the line, Mahaffey’s defense should shine for the Nitany Lions.

Finally last, but certainly not least, Demetrius Lilley comes into Penn State at 6’10” and 230 lbs. In essence, he’s the only true big man on the Penn State roster this season.

Lilley is in such a unique spot, as the tallest player on the team in a position that seems open for minutes. However, he’s also the lowest-rated recruit, so whether or not he’s ready to play big minutes right away is the biggest question.

By time he’s a senior, Lilley could become the starting center or will remain a key role player. Overall, competing with Njie for his entire career for minutes will be tough.

One thought on “In-Depth On Top 2022 Recruiting Classes: Penn State”