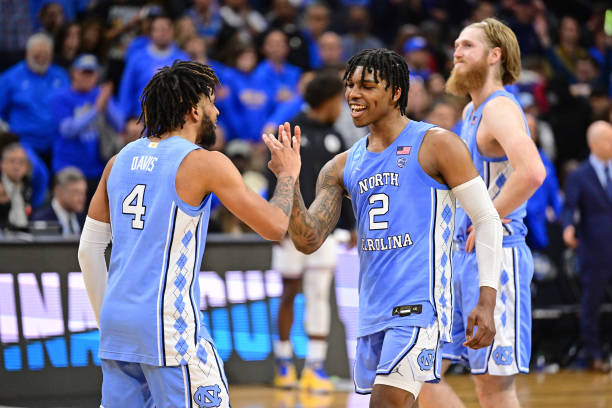 While Kansas celebrates a national championship, 300+ other programs turn their eyes to next year. Enjoy our way too early 2023 college basketball rankings!

With no clear top team in the country (surprise), North Carolina is the safest bet. The Heels will likely return Caleb Love, R.J. Davis, and Armando Bacot – three of their most key players during the championship game run. Hubert Davis also showed what this team can do, and whenever a team brings back experience, it’s a team to watch out for the following season.

If Tyger Campbell, Johnny Juzang, and Jaime Jaquez Jr. all return, that puts the Bruins as a top-15 team alone. They also bring in 247Sports number two overall player Amari Bailey, and the 16th overall recruit, Adem Bona. It’s easy to take Final Four appearance bias, and UCLA didn’t make an extended run this March. But don’t count out the Bruins from being the top-ranked team to begin next season.

We saw what Jamal Shead could do once he had to step up after the injuries to Marcus Sasser and Tramon Mark. Now, the Cougars welcome that “Big 3” back to H-Town and have Jarace Walker, the top power forward recruit in the country. If you thought Houston dominated in the American Athletic Conference last season, just wait for this year.

Arkansas is the team you want to pick at number one, but the lack of experience drops them down to fourth. Eric Musselman is an elite coach and recruiter, hence three of the top 22 incoming freshmen, starting with number six Nick Smith. A few key pieces may return, which would solidify the Razorbacks as a title contender and the best team in the SEC.

With Kentucky, there’s still a major question to be asked. Will Oscar Tshiebwe come back to Lexington and look to make it out of the first round? Of course, Shaedon Sharpe is another question mark, and they would give UK a chance to debut as the preseason number one. As of now, Sahvir Wheeler Jr. and Keion Brooks Jr. are the top projected returners and of course, John Calipari has a star-studded incoming class.

It feels almost criminal to rank the defending champs this low, but when you likely have to part ways with Ochai Agbaji, Christian Braun, Remy Martin, and David McCormack, you need to prove yourself all over again. For the Jayhawks, that shouldn’t be impossible. Jalen Wilson could finally break through into the star player for Kansas and Bill Self brings in the fourth overall rated class.

It doesn’t even matter that Paolo Banchero and countless other key stars on Duke’s latest Final Four team are gone. The Blue Devils have an absolutely loaded incoming class, headed up by three of the top five players in the class of 2022. The idea of Jeremy Roach returning should also propel Duke’s ceiling at another Final Four run. Just tread lightly in year one without Coach K.

If Kennedy Chandler returns, Tennessee moves into the top five. Even without him, Zakai Zeigler is a solid starting point guard. And the Vols make it three SEC teams in my top eight. Rick Barnes has an elite and experienced returning team that defends as well as anyone on this list, finishing third in KenPom adjusted defense in 2021-22.

Hunter Dickinson seems like the most likely big man to return for another season and is expected to be re-joined by Caleb Houstan and Moussa Diabate. The Wolverines’ backcourt could take a hit unless Frankie Collins can play as he did against Colorado State. Either way, with the Big Ten in for a down year, Michigan looks ready to take control of the conference.

For the first time in some time, the Big East might not go through Villanova. It’s also not exactly looking like a down year for the conference, just that Creighton might be that good. With Ryan Nembhard, Ryan Kalkbrenner, Arthur Kaluma, and Trey Alexander all likely coming back, it puts the Bluejays right in the driver’s seat in the conference.

Baylor’s competitiveness even with two key players injured shows what Scott Drew’s team is all about. That was also against UNC and throughout March, we learned what the Heels were about. The Bears have health concerns and uncertainty about a few players returning but still look on point to contend right at the very top of the Big 12.

Ben Mathurin is likely done in Tucson and his Wildcats teammates Christian Koloko and Dalen Terry might be on their way out too. But remember, Tommy Lloyd’s team brought in the Gonzaga mentality that is hard to match. They also had such a deep team that a few very key pieces will still put the Wildcats in the conversation for a Pac-12 title.

The best backcourt in the country might belong to Auburn next season as the SEC continues to roll off teams on my way too early 2023 college basketball rankings list. Wendell Green Jr. and K.D. Johnson averaged about 25 points per game for the Tigers last season. The frontcourt will need to prove itself again, but right now, the Tigers are looking scary.

Even in early February, I believed the Ducks could turn around their season and be a sleeper team to make the Final Four. They never did and I’m still on the bandwagon of Dana Altman’s magic. De’Vion Harmon, Quincy Guerrier, and N’Faly Dante make Oregon a scary team. But the real guy to watch is Dior Johnson. The 6-foot-3 guard somehow slipped to 23rd in 247’s rankings but has the handles, vision, and finishing to be the top freshman in the country next season.

Without Collin Gillespie and Jermaine Samuels, Nova’s lack of depth doesn’t provide a ton of reason why the Wildcats should be a team to beat next season. But rule number one of college basketball is to never doubt Jay Wright and I’m sticking by that. If Justin Moore is good to go for next season, Eric Dixon is already back, and that’s enough for me to like Nova’s chances in the Big East yet again.

Jahvon Quinerly is the top returning player for the Crimson Tide and there’s no shame in that. Nate Oats also brings in the third best-recruiting class in the country. But it’s a tough and experienced SEC, so that won’t be enough, at least from the start. The Tide’s ceiling is as high as any team in the country, though.

For how dominant the Zags have been over the past couple of years, 17th probably seems outrageously low. But remember, Gonzaga was a four seed in 2018, 11 seed in 2016, and eight seed in 2014. They aren’t always the top overall seed, even if it seems like it. Now, if Drew Timme comes back, they vault back inside the top ten. But for now, it’s a young team led by Julian Strawther and Anton Watson. Still good, but not anywhere near their most recent seasons.

Xavier’s NIT run should show that with the right coaching, the Musketeers can do a lot of damage. The backcourt makes me nervous, but Zach Freemantle and Jack Nunge help to calm those down a bit. Sean Miller 2.0 time in Cincinnati.

The top seven scorers from last year return to Saint Louis, making the Billikens an easy choice for the Atlantic 10 team to beat. Last year, St. Bonaventure fell short of those expectations, but Saint Louis has a much deeper roster than the Bonnies, who realistically played six guys. If Javonte Perkins can get back to even 80% of form before his ACL injury, Saint Louis will be the top mid-major in college basketball.

Xavier Johnson and Race Thompson give Mike Woodson two leaders on a team that has seen some transfers dip out. If Trayce Jackson-Davis decides to give it another run, the Hoosiers certainly have the makings of a top-15 team. But you can’t count your chickens before they hatch and that’s one big egg for Indiana.

So far, the Golden Eagles haven’t had any players enter the transfer portal, which is a bit of a miracle in today’s day of age. Justin Lewis is a name to watch as the Big East’s most improved player could be in store for even more. On a young team with a lot of expected returning pieces, Shaka Smart’s club is looking good in a Big East that’s had as busy an offseason as anyone.

Graham Ike and Hunter Maldonado headline a Cowboys team primed to take over the Mountain West next season. Colorado State could also be there if David Roddy returns, but Wyoming could have one of the most experienced teams in the country next season. Think next season’s Purdue.

Adama Sanogo will be the Big East Player of the Year next season, which automatically has the Huskies as a contender in the Big East. Dan Hurley did lose out on some transfers but has four-star Donovan Clingan committed to Storrs. He’s also a coach that seems to get the most out of his players, and the Huskies have enough talent to offset any disparities.

With Mike Miles gone, Jamie Dixon will need a new leader on a Horned Frogs team that was an 8-seed and powerhouses by Seton Hall into the second round. So far, the bulk of the roster looks like it’s coming back to Forth Worth, which sets them up nicely for a top-half finish in the Big 12.

Armaan Franklin and Reece Beekman give Tony Bennett a solid group to work with in an ACC that is likely to be more competitive. I like the Cavaliers to be rejuvenated after a difficult 2021-22 season.