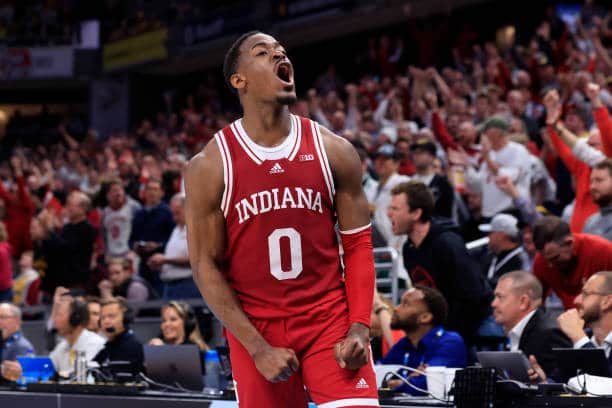 The Big Ten Tournament has a team looking to steal a bid.

Talk about a must-watch game! The Hoosiers take down the aptly named Fighting Illini 65-63 in the Big Ten Tournament quarterfinals. A pure want and fight out of this Indiana team came with intelligent shot selection, making free throws, and crucial rebounds. While neither team turned the ball over a lot, Illinois had the worse one with under 15 seconds to play.

A big part of today’s game comes on the back of Xavier Johnson, who came up with six assists to add to his 13 points. Finding Parker Stewart, Miller Kopp, and Trayce Jackson-Davis for open looks, these shots would fall for these two players to boost Johnson’s num ers. Johnson’s real help came from Jackson-Davis and Race Thompson.

Iowa continued its late-season run. The Hawkeyes’ aggressive playstyle allowed the team to get to the free-throw line for a true separation from Rutgers. This team had an efficient scoring day, and while Rutgers tried to battle back, it was too late. Rutgers will likely be in post-season play with four players from the Scarlet Knights scoring in double figures, but it is might be trending lower on the bubble.

The Spartans continue to surprise. Grabbing a win over Wisconsin and advanced to the semifinals. The Badgers fell by using an aggressive defense and missing free throws. Michigan closed out the game while Wisconsin faltered down the stretch. If this is how Wisconsin is going to close out games, the NCAA may need to take a long hard look at the Badgers’ seeding.

Wrapping up the Big Ten Quarterfinals, it is only fitting that this game remained close throughout the entirety of the game. Purdue won 69-61 over Penn State. The Boilermakers end the Nittany Lions run with good rebounds and ball movement to seal the win. While Purdue played solid defense, the team also did not foul and disrupt shots.