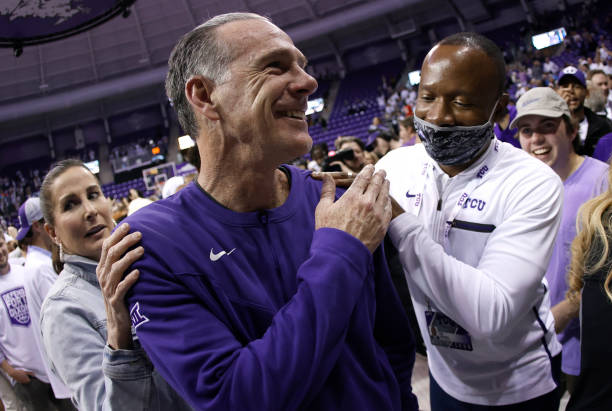 The Big 12 Tournament concluded its quarterfinals with Baylor getting bounced earlier than expected.

The Longhorns entered the season as the number five team in the country and received significant attention as a Big 12 title contender. Instead, their Big 12 Tournament slate ends in the quarterfinals, with a 21-11 record heading into the NCAA Tournament, losing their last three games.

The Marcus Carr experiment has not been what the Longhorn faithful has expected. The inconsistent offense continued on Thursday, with a 3-of-13 day from the field.

Texas is too inconsistent on offense and the defense let the Horned Frogs get back into the game, after being up 20 at one point.

With the momentum of the team, it would be no surprise to see the Longhorns fall before the end of the first weekend.

For TCU, it gives them room and an opportunity to extend what has been their best season under Jamie Dixon and as a member of the Big 12.

Bob Huggins’ ejection in the first half did not change the trajectory of this game as the Jayhawks thoroughly handled West Virginia. It was a 19-4 lead at that point but pointed out flaws with the officials.

Kansas picked itself up after a disappointing week in late February, with three straight wins, including against the Mountaineers.

The Jayhawks controlled this game, their way with dominating the glass, stifling the Mountaineers offense and creating a ton of assist opportunities.  They had 17 assists on 33 made shots, nine more than West Virginia.

Kansas’ opponent will be a familiar foe, the third time they’ve faced TCU in 11 days.

The Bears have yet to win a Big 12 Tournament championship and have not made it to the final since 2013. That tradition will continue as Baylor fell to Oklahoma, 72-67 in game three of the quarterfinals slate.

Baylor made three of their 22 3-point attempts, while Oklahoma had a 51/52/75 shooting splits from the field.

One of the most surprising performances came from junior guard Adam Flagler, who missed all six of his 3-point field goals and tied season-low two points.

The Sooners had five players in double-figures, while getting a 15-point, nine-rebound performance from senior forward Jacob Groves.

For the Sooners, the chances of making the big dance relies on a miraculous tournament run. Baylor, however, will hamper and will need to adjust come tournament time with a lock as a Top-2 seed.

Adams, similar to Chris Beard, had to grow his roster through the portal. The difference is Adams’ results have been shown on the court.

The Red Raiders thrashed Iowa State, holding them to a season-low 41 points and 31.3% from the field. No Cyclone scored in double-figures and coughed the ball up 20 turnovers.

After being a top 10 team in early January, Iowa State has fallen down to earth and is hoping their bid in the NCAA Tournament is still in tact.

Meanwhile, Texas Tech has the most to gain out of the Big 12 teams and can make a massive jump with more wins.