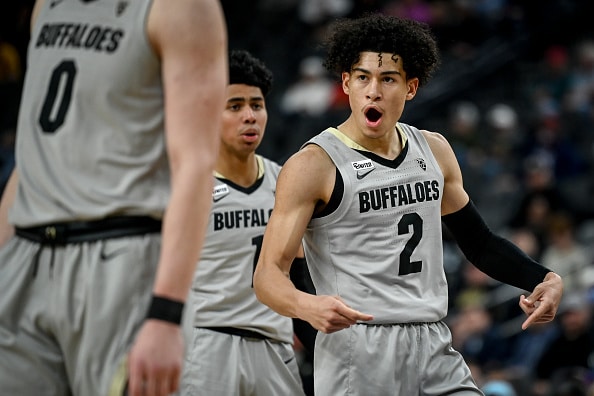 In the second half of the game, Kerr Kriisa, one of the team leaders and a player I said to watch in my Pac 12 tournament preview went down and had to leave the game. It was ruled a sprained ankle, and while Coach Tommy Lloyd said he should be back soon, there is obviously a concern.

The question is who will step up because Arizona needed all 40 minutes to beat a 16-16 Stanford team, no disrespect to them. Christian Koloko and Benn Mathurin were able to do so today, but they will need that third piece if they want to remain a legitimate threat until Kriisa is healthy.

(4) Oregon vs (5) Colorado – Rebounding the key to victory

If you look at the team stats, these teams played pretty evenly, but there is one thing that stands out and the main reason why Colorado was able to win by 11, and that is the rebounding advantage. Colorado outrebounded Oregon 55 to 42, including 17-12 on the offense glass. Rebounding and creating second chances is extremely important for success, so having guys like Jabari Walker and Evan Battey, who combined for 28 rebounds is massive.

For Oregon, the nightmare season finally ends and they can turn their attention to next season.

In the last three games, Jaimie Jacquez has been borderline unguardable, averaging just under 27 points per game on over 60% shooting. Today, he put up 23 and 11 rebounds, and while Jules Bernard scores 19, they didn’t get much help besides that. The last time we saw a UCLA player get hot in March, they made the Final 4, so this is a great sign for the Bruins.

(3) USC vs (6) Washington – Trojans win without their stars

USC for the most part has been a two-man show, with Drew Peterson and Isaiah Mobley doing the bulk of the work and a key reason why USC came into this game 25-6. Today, they were a nonfactor, combining for only 18 points, yet USC still won. Boogie Ellis came up big with 17 points, the only player on USC to score in double digits.

This is semi-encouraging for USC. If they are able to win a game without either of their top two guys scoring in double figures, that is a good sign. Granted, they were playing Washington, but a win is a win. Let’s see how they bounce back on Friday when they take on their rivals, UCLA.