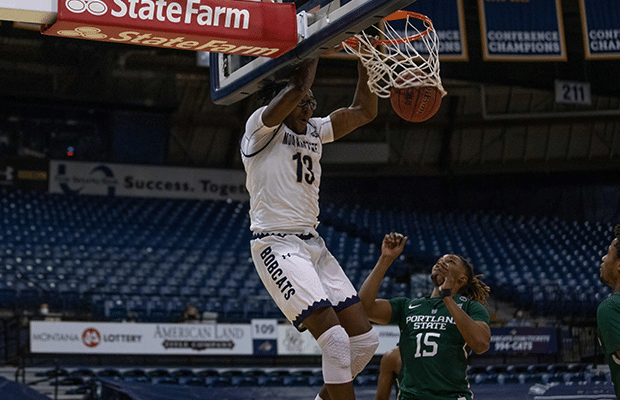 CBB Review highlights the ins and outs of every conference tournament leading up to Selection Sunday. Up next: The Big Sky Tournament.

Throw out seeding when it comes to these mid-major conference tournaments. It is anybody’s chance to steal the auto-bid.

Kountz is one of the most complete offensive players in mid-major basketball. He is scoring over 20 points per game and still doing so efficiently.

Jones is a double-double machine, but don’t be surprised to see him stretch the floor as well.

Virginia Tech-transfer Jalen Cone can do exactly what Mike Young players are trained to do — shoot the lights out.

Belo is a key two-way player who is the most dangerous shot blocker and paint protector in the conference. He won Big Sky Player of the Year.

The Wildcats may be your typical undersized mid-major but they are not a team any of the higher seeds hope to see get a bid in March. On the offensive end, they are very efficient shooters, hold onto the ball, and get to the foul line. Defensively, they are athletic and force you into mistakes. Koby McEwan is a first-team all-conference player to watch out for.

In a battle of tempo-control, Idaho is able to get Sacramento State out of its comfort zone and prevail.

Portland State, who has won eight of their last eleven, stays hot

A convincing win for Eastern Washington, who lights it up from behind the arc

Domination in all facets. Montana State takes care of business in the Big Sky Tournament.

Weber State exploits Montana’s defensive deficiencies by getting to the line early and often. Wildcats take this one.

In a close one, Southern Utah prevails, completing the season sweep over Portland State.

In a fast-paced game, Northern Colorado fails to make key stops, as has been an issue this year. Eastern Washington is on top.

Weber State gives Montana State a run for their money fail to defend the Bobcats from behind the arc. The one seed heads to the championship game.

After all this, the top seed ends up taking the Big Sky crown. Montana State’s length and depth are simply too overwhelming for Eastern Washington to handle for 40 minutes. The Bobcats are going dancing!