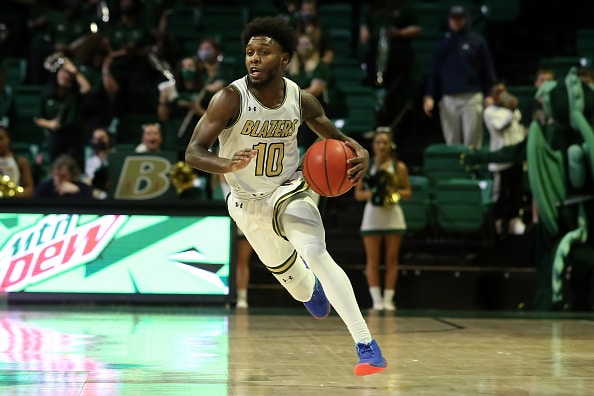 CBB Review highlights the ins and outs of every conference tournament leading up to Selection Sunday. Up next: The C-USA Tournament.

The C-USA featured tons of really talented teams this year and is quietly becoming one of the top mid-major conferences. We had some surprises, like Middle Tennessee winning the east division despite being picked to finish 14th in the preseason poll. In the end, North Texas took the title going 16-2 in conference play, but there will be a lot of competition, with an impressive eight teams hitting double-digit wins in conference play.

The conference player of the year race is wide open, but it might be Jordan Walker’s to lose. The talented guard is averaging 19.3 points per game to go along with 5 assists per game. He knows how to deliver in big games as well, scoring 42 points against Middle Tennessee and 36 against Louisiana Tech. He’s only had one game this season where he didn’t score in double digits, and that was against a D3 school where he only played 20 minutes.

Kenneth Lofton caught the attention of many last summer when he dominated in the U19 World Cup, something we don’t see mid-major guys do too often. At 6’7 and 275 pounds, Lofton’s frame makes it extremely difficult to guard him physically, and because of that, he is able to score and rebound at a high rate.

Perry is a perfect example of stats don’t mean everything. While his numbers aren’t bad by any means, the 5’11 guard did all the little things and was the best player on the best team in the conference. He too knows how to show up in big games, scoring 23 points against Kansas and 25 against UAB.

If you like scoring, Boum is your guy. The junior averaged just under 20 points a game, including two-game streak where he scored 50 points in two games. If UTEP, the 4W seed wants to make a run, they’ll have to play through Boum.

Charlotte had a good season all things considered, and you can point to Jahmir Young as the reason why. Like Boum, he averaged 19.8 points per game and scored in double digits in every single game this season. At just 6’1, he can hold his own on the glass as well, averaging 6 rebounds per game.

Finally, we got two Western Kentucky guys. One is a big part of the offensive side while the latter is on the defensive. McKnight put together a nice campaign this year, averaging a smidge over 16 points per game to go along with 5.5 rebounds and 5.7 assists per game. He took a major jump this year, increasing his numbers in every department, and is a sneaky defender too, stealing the ball 1.9 times per game.

Then there’s Sharp, the 7’5 center who averaged 4.6 blocks per game, best in Division I. If a team wants to drive the ball, they better pray that Sharp is sitting on the bench, because your shot will be headed the other way if you even make an attempt. With McKnight and Sharp, teams might have trouble putting the ball in the basket throughout the C-USA tournament.

UTEP finished the season on a great note, beating then 16-1 North Texas and earning their 11th win of the season. They’ve also beaten Louisiana Tech and only lost to UAB by 3. Thanks to Boum, this team can compete with any team in the conference, and with only the NCAA Tournament in sight, expect this team to give it their all. Are they going to win the C-USA tournament? Probably not, but they can cause some chaos on the way.

The two teams played close both times, with FIU winning by under 5 both times. The keyword there is winning, and we’ll see them make it three in a row.

With all due respect to both teams, this is one of the lower-quality games you’ll see this week. Southern Miss won the first time by just a point, and the second time the game went to OT, but UTSA somehow outscored them by 19 in the five-minute period. UTSA should win this one, but maybe take your dog for a walk or something during this one and check the score after.

Charlotte ends the season on a two-game winning streak while Rice ends on a two-game losing streak. Momentum is important this time of the year, and that’s what will push Charlotte over the edge in this one.

The C-USA really enjoys close games, so expect many in the C-USA Tournament. When these two teams played, Lousiana Tech won by 4 on the road thanks to 21 points, 13 rebounds, and 7 assists from Lofton. If they couldn’t stop him then, good luck stopping him now.

Shocking. These two teams went to overtime when they played. With that being said, big-time players come to play in big-time situations, and that’s exactly what Boum will do in this one. All chalk up to this point.

The chalk continues here, with FAU winning easily. Nothing more to say here.

North Texas is a really tough team to beat, so unless Jahmir Young drops 40 points, expect the Mean Green to move on.

These two games played in a one-point game the first time around, with Louisiana Tech being the victors. I expect Lofton to get Sharp in foul trouble early, so it will come down to Lofton vs McKnight. Give me Lofton and the Bulldogs here.

Even though Middle Tennessee crushed UTEP when they played, the Blue Raiders staggered to the finish, and their magical season ends on the 10th.

Jordan Walker is just too good to let his team lose in the quarterfinals here. UAB by 10 here.

This is the game many of us have been waiting for. Both teams play hard and smart, and there is loads of talent from both departments. In the end, it goes to the team that won both during the regular season, the Mean Green.

West supremacy is shown here, with all four teams in the semifinal coming from the west side. Two dynamic scorers take on each other in a matchup that saw both score 22+ in their lone regular-season matchup. That game ended with a game-winning jumper by Jordan Walker, and don’t expect anything different this time around.

On the 5th and final day of C-USA tournament basketball, we get ourselves a great matchup. Both these teams are capable of winning a game in the tournament, but most likely only one will have the opportunity. Like I said earlier, big-time players show up in big-time games, and Jordan Walker, the best player in the conference plays out of his mind and sends UAB dancing.