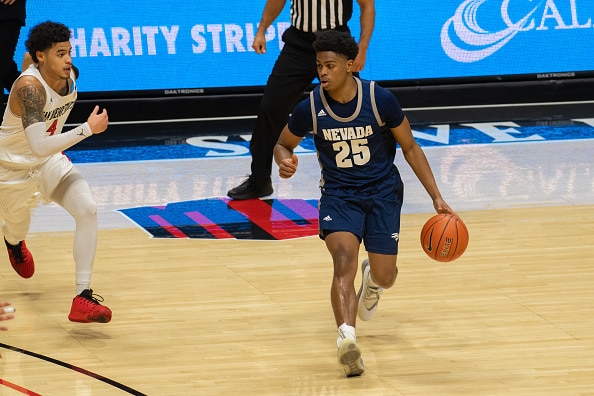 CBB Review presents its 2021-22 Mid-Major All-American team, featuring some of the best players in the country that you’ve never heard of.

The onset of the 2021-22 college basketball season brings newfound excitement. A large part of that stems from having a sense of normalcy returning after a season full of COVID issues. COVID hasn’t gone away, but a full season awaits every team, with the hope that there will be far fewer cancellations. One thing hasn’t changed though: mid-major disrespect.

However, you’re in luck. Here at CBB Review, we have the best mid-major players you may (or may not have) heard of heading into the new season.

David Roddy was a first-team selection in the Mountain West last season. The 6-5 guard averaged close to 16 points and 9.4 rebounds per game to earn that honor, with both of those averages also being the best for the Rams. His true shooting percentage sat at just under 60 percent, and he was a top 50 rebounder on the defensive glass. Roddy’s ability to do a little bit of everything for Colorado State will be key as he tries to help the program get back to the NCAA Tournament for the first time in nine seasons.

Grant Sherfield made a huge impact on Nevada last season after transferring from Wichita State. He earned Mountain West Newcomer of the Year honors after averaging 18.6 points per game, second-best in the league in 2020-21. However, his game is more than just scoring. He led the Mountain West in both assists and steals last season, making him the kind of all-around player that can singlehandedly win games if needed. The scariest part is that Sherfield could improve on those numbers this season while being a candidate for Mountain West Player of the Year. Nevada has high expectations this season, and it starts with Sherfield.

I’m not sure that Max Abmas really needs an introduction. He did that himself during the NCAA Tournament last season. After testing the NBA waters, Abmas decided to return to Oral Roberts for another run. He was the NCAA’s leading scorer in 2020-21 with 24.5 points per game. His ability to score from anywhere on the court was on display when he went off for 29, 26, and 25 points, respectively, against Ohio State, Florida, and Arkansas during ORU’s Sweet 16 run. That doesn’t even include the two 40+ point games he had in the regular season. Expect Abmas to be a mid-major force once again in 2021-22.

Osun Osunniyi is a beast in the paint. He averaged close to a double-double last season, just missing out at 9.4 rebounds per game. On top of that, he will send your shot into the bleachers, averaging close to three blocks per game in 2020-21 on his way to being named the A-10’s Defensive Player of the Year. He has a realistic chance to get to 100 blocks this season if the Bonnies play into March. Osunniyi’s abilities are one of the reasons why St. Bonaventure is highly respected heading into the new season. Not only is he one of the best bigs in his league, but he is also one of the best in the nation.

Future lottery picks aren’t supposed to choose mid-major schools when making their commitment decisions. However, Patrick Baldwin Jr. is no ordinary future lottery pick. He decided to go play for his father at Milwaukee, and now he begins his quest to bring national recognition to the Panthers while also most likely positioning himself for the 2022 NBA Draft. Baldwin Jr. has natural playmaking ability and can operate just about anywhere on the floor. Expect him to dominate the Horizon League while continuing to polish his game. He should have a real shot at making the national All-American team so long as he puts up the numbers that come with his hype.

OVC foes are probably tired of seeing Grayson Murphy across from them. Murphy will be a graduate student for the upcoming season, and he’ll be playing his fifth year of basketball in Nashville. He has been the league’s Defensive Player of the Year for the last two, on top of being a first-team selection each time as well. While Murphy is an excellent defender, he’s just as good at running the Bruins’ offense, averaging a little over six assists per game over the past three seasons. To add the cherry on top, his rebounding numbers have increased each season, with him averaging eight per game in 2020-21. Murphy is a big reason why Belmont has been as good as they have over the past few seasons, and there should be more of the same for 2021-22.

Isiaih Mosley burst onto the scene last year, becoming the first player in Missouri State history to lead the Missouri Valley Conference in scoring. Mosley’s average of just under 20 points per game was accentuated by 14 games scoring at least 20 points in 2020-21. In fact, that was an increase of 11.5 points per game from the prior season, which earned him a spot on the league’s Most Improved Team. Mosley showcased all of his skills last year, also averaging 6.3 rebounds and 3.1 assists per game on the offensive end, and one steal per game on the defensive end. Furthermore, he was close to 39 percent deep ball shooter, averaging just under 1.5 makes per four attempts. His expected continuation of these performances has Missouri State thinking MVC title and NCAA Tournament for the first time in 23 seasons.

ShanQuan Hemphill was one of the biggest reasons why Drake was so successful last season. Unfortunately, he didn’t get to enjoy all the fruits of his labor due to a foot injury, only returning for a limited time in the Bulldogs’ NCAA run. Still, he was Drake’s leading scorer (13.2 points per game), a 2nd Team All-MVC selection, and the league’s Newcomer of the Year for his efforts. He hounded the boards too, averaging close to six rebounds per game. Hemphill will be fully healthy and looking to improve upon his numbers in his second year in Des Moines. He will be a key player once more as Drake looks to win the league for the first time in three years.

Kenneth Lofton Jr. was the Freshman of the Year in Conference USA for 2020-21. The mid-major big man earned that honor by leading the Bulldogs in scoring and rebounding at 12.2 points and 7.5 rebounds per game, respectively. He was also one of the best defenders in the league, with his defensive rating of 87.7 being third best in C-USA. Lofton’s strong play even landed him on the All-NIT team as he helped Louisiana Tech finish in third in the tournament. Now, in his second year, he hopes to help the Bulldogs reach March Madness. His ability to dominate down low will go a long way towards trying to put Louisiana Tech back into the NCAA Tournament for the first time in 31 seasons.

Jacob Gilyard is back again for Richmond. The now graduate student will be playing his fifth year for the Spiders, and he will once again be one of the best defenders in the nation. Gilyard led the country in steals for the second straight season with 3.6 per game. As the commander of the offense, he also averaged five assists per game while dropping 12.3 points per game. Gilyard will most likely take a little more on his shoulders with the departure of Blake Francis, but he will be up for the challenge. He and the rest of the returners at Richmond want to prove that last season’s letdown was a fluke. If a trip to the Big Dance happens, you can guarantee Gilyard will be a big reason why.

Kyle Lofton did just about everything for St. Bonaventure last season, The rising senior was the Bonnies’ leading scorer at 14.4 points per game. However, he also averaged 5.5 assists and 1.4 steals per game. All of that was good enough to make him an Atlantic 10 first-team performer for the second season in a row. Lofton played his best when it mattered, helping SBU advance to the NCAA Tournament by knocking off Saint Louis and VCU in the A-10 Tournament. Given his consistency during his career, expect Lofton to put up monster numbers once more while trying to make back-to-back March Madness runs. There are lofty expectations on for the Bonnies this season, be Lofton can loft the team to the challenge.

Antoine Davis may be underrated solely because of where he goes to school. It’s true that Detroit Mercy hasn’t necessarily had the greatest records while he’s been there, but Davis is an absolute star regardless. He averaged 24 points per game last season, and that was actually his lowest scoring average of his three seasons in college. However, part of the reason for the decline is due to Davis working on other parts of his game. He has improved as a defender and a distributor, including averaging a career-high 4.8 assists per game in 2020-21. This season, Davis may finally get the chance to showcase his talents in March. It won’t be easy with the strength of the Horizon League, but he is a player worth catching at least one game for during the new season.

Josh Mballa asserted himself in the MAC last season. The native of France averaged an impressive double-double of 15.3 points and 10.8 rebounds per game in 2020-21. In fact, his beast mentality on the boards put him in the record books, nabbing 50 rebounds during the league tournament. If that wasn’t enough, he plays outstanding defense as well, earning the MAC’s top defensive award last season too. Needless to say, Mballa will enter the new season with the potential to improve upon those already solid numbers. Furthermore, he will be expected to help Buffalo get back to mid-major giant killer status in March. He is more than capable of living up to that hype and helping the Bulls be formidable again.

There wasn’t much Johni Broome didn’t earn last season during his first year in college. Broome was the OVC’s Freshman of the Year as well as a league first-teamer and conference tournament Most Valuable Player. Oh yeah, he will still technically be a freshman again this season too. Broome earned all of those accolades by averaging 13.8 points, nine rebounds, and almost two blocks per game in 2020-21. Each of those averages were even slightly higher in league play. He saved his best game for the league championship game, scoring a career-high 27 points. Broome will continue to blossom as he tries to help Morehead State repeat as champs in 2021-22.

When it comes to rebounding, there’s none better than Fardaws Aimaq. He led the NCAA with 15 rebounds per game last season, becoming the first player to average a total that high in 40 seasons. On top of his rebounding, he also averaged 13.9 points and 1.7 blocks per game. His overall body of work led him to earn the WAC’s Player of the Year and Defensive Player of the Year honors in 2020-21. The 6-11 big man returns for his second season at Utah Valley, and it’s a safe bet that he will put up similar numbers. Aimaq is a mid-major double-double machine that hopes to take the Wolverines back to the NCAA Tournament for the first time ever.