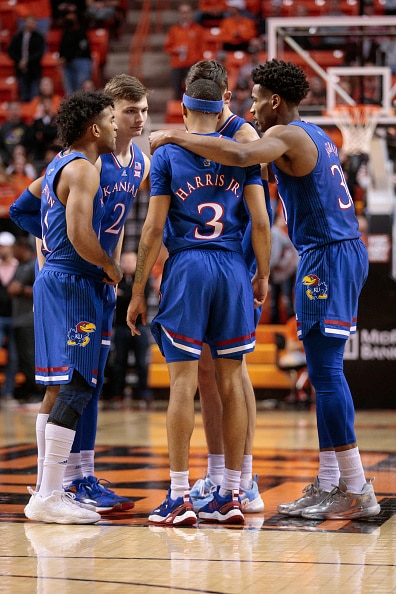 #8 Baylor visits Allen Fieldhouse to take on #10 Kansas in yet another loaded Saturday slate.

Arguably two of the best teams in the country take on each other in hopes of picking up a quality win. For Baylor, this is redemption for when they lost to Kansas on the road last year, their only regular-season loss during the championship run. Kansas is looking to earn the respect of the country again after the drubbing one week ago against Kentucky.

Now, at CBB Review we make sure that you’re getting the best read to start your morning, so we brought in our Kansas and Baylor featured writers to collaborate and give you the full in-depth scoop before tip-off. Ariel Puterman will give you everything you need to know about Kansas while Drew Tineo will do the same with  Baylor.

The Jayhawks received news that is on par with moments like your wedding, birth of a child, and Christmas as a kid, that Ochai Agbaji cleared health and safety protocols and will play against Baylor. This is major news, as Agbaji missed Tuesday’s game against Iowa State and the possibility of him playing seemed iffy. Everyone knows how important Agbaji’s presence is for this team, and him being able to play is huge.

Someone else to watch is Joe Yesufu. When they needed him last game since it seems Remy Martin will miss more time, he stepped up in a big way and was a key contributor to their victory. It will be interesting to see if Bill Self gives him more of a role in the rotation or if he will head back to the bench.

Defense has been a big issue, letting up 75 or more points against Kansas State, Texas Tech, and Kentucky, but they only allowed 61 against Iowa State. Baylor has a ton of guys who are capable of dropping 20 if they are healthy, so if Kansas is able to limit the scoring and keep them under 70, then this should be theirs to lose.

Lastly, the other guys. We know Agbaji will be the main guy, as he’s been for almost every game, but who else will step up? We’ve seen Christian Braun do it several times, Jalen Wilson, David McCormack, and DaJuan Harris twice against Iowa State. With Baylor having so many pieces, Kansas will have to match that and have at least two other guys score 10+ if they want to win. Expect Bill Self to try to run the offense through McCormack, who looked good last game and was the key reason they won last time the two teams played.

One thing to watch: Slowing down senior guard Ochai Agbaji

He has been a challenge for any team that has played the Jayhawks. He leads the Big 12 in scoring at 20.9 per game and shooting an absurd 46.9% from beyond the arc. Agbaji is coming off one of his worst performances of the season, shooting 4-14 from the field in an 18-point loss to Kentucky. However, he is the clear star point guard under Bill Self, who has produced electric guards at a rapid pace. The Bears will need to play elite defense on the backcourt, in order to neutralize Agbaji and give them a shot.

With junior guard Adam Flagler and sophomore guard LJ Cryer out of the lineup with injuries, junior Dale Bonner has been given a lot of minutes. Bonner is a transfer from Fairmont State and has been an inconsistent piece in the lineup. However, he has played 20+ minutes in the last three games, including a season-high 36 against West Virginia. He collected seven points and five rebounds in their win over Kansas State on Jan. 25 and has a respectable defender. Although not the most flashiest player, if Flagler and Cryer are out for this game, Bonner will be held accountable for significant minutes against the Jayhawks.

Although forward Kendall Brown is the decorated NBA draft prospect, Sochan has displayed a lot of next-level attributes. Sochan has collected eight double-figure scoring games, including a 17-point performance in the loss to Alabama on Jan. 29.

This entire possession is the Jeremy Sochan special. Completely shuts down the perimeter and then body’s up a defender to force a miss. Just incredible pic.twitter.com/3JW9m0Lp8j

Sochan has improved his defense throughout the season and his offense has been electric when given an opportunity.

Tip-off is at 4:00 PM ET on ESPN. Be sure to tune in to one of the top games not only of the day but the whole year.