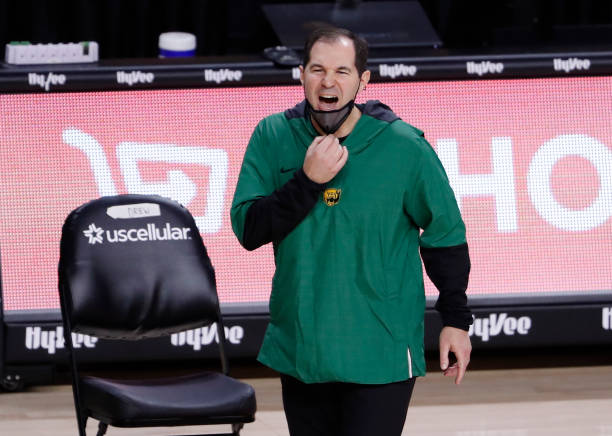 Baylor proved its top ranking with a top ten win over Iowa State.

Baylor would survive its toughest road test of the season yet, with a 77-72 win over No. 8 Iowa State on Saturday at Hilton Coliseum.

Senior guard James Akinjo led the Bears in scoring with 16 points on 6-of-12 from the field. The Bears had six players score nine or more points. Even with his big game, Akinjo missed four of his free throw attempts.

When given opportunities at open shots, Baylor did not let them go to waste. The Bears started 52% from the floor through the first 11 minutes.

It was a balanced attack, as seven different players scored during that time frame, led by five from Akinjo. Akinjo did it on both ends on Saturday, first from this lefty layup against a tough defense.

Iowa State’s 19 forced turnovers and double-figures offensive rebounds gave them chances to score and helped their 47.2% from the field.

That teamwork tho. Brown ➡️ Mayer = 🪣

This was one of the rare chances they got and were able to extend the lead back to double-figures.

The Bears passed its first difficult road test in a loaded Big 12. An area that can work on and get better at is limiting opponents’ second chances.

Kansas transfer junior guard Tristan Enaruna had his best game of the year with 23 points and eight rebounds on 8-11 from the field. However, outside of him, senior guard Izaiah Brockington and freshman guard Tyrese Hunter, the Iowa State offense was quiet. Transfer Caleb Grill had just three points on one of six from the field.

Gabe Kalscheur was scoreless and had six turnovers.

The three-point shooting severely hurt as well, making one of their 14 attempts.

The Bears will continue conference play on Tuesday against Oklahoma. Iowa State will stay at home for a Wednesday night game against No. 25 Texas Tech.