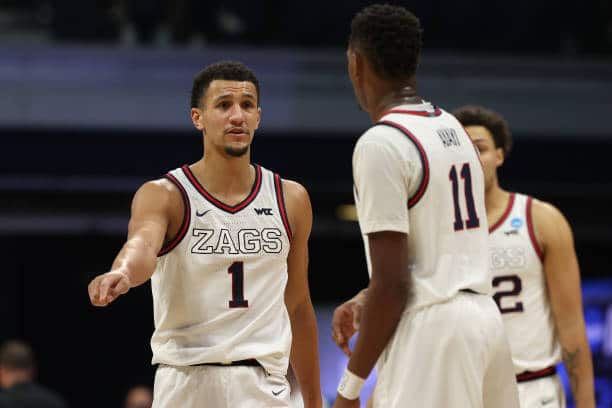 CBB Review celebrates the New Year with some of the best moments in college basketball in 2021.

Despite all the recent COVID cancellations, it is critical to reflect on this year and think about what we accomplished. We finished a college basketball season, played out March Madness, and turned around and started a new season the following fall. That is something we could not have said exactly one year ago.

Let’s take a look back at the best moments that made 2021 such a revitalizing year.

Whenever a blue blood is on the verge of a major upset, the whole college basketball world pauses. Dayton was off to a rough start but everything turned around when they arrived in Orlando. In a hard-fought battle with the No. 4 Jayhawks, the Flyers found themselves trailing with the ball in the final seconds.

After Malachi Smith’s layup attempt was denied, Mustapha Amzil threw up a wild fadeaway that bounded off the rim, backboard, and eventually trickled in. Dayton finished the ESPN Events invitational at 3-0, also including a 16-point win over Miami.

Georgia Tech’s 2020-21 basketball season started off like many, with demoralizing losses to Georgia State and Mercer. Even heading into conference play, things weren’t looking fantastic but the Jackets really turned on the jets down the stretch. ACC Player of the Year, Moses Wright, and ACC Defensive Player of the Year, Jose Alvarado, were the main forces behind their run. Eventually, the Jackets took down Florida State, becoming the ACC champions for the first time in 28 years.

8. We have a new power in the state of Illinois

Everyone is familiar with Loyola-Chicago’s cinderella Final Four run in 2019 but this past March, the Ramblers cemented themselves as a serious, consistent threat. Illinois entered this Round of 32 matchup having won 14 of their last 15, including the Big Ten championship. This momentum was forcefully halted by Porter Moser’s stout defense and the offensive heroics of Cameron Krutwig. Loyola left their Sweet Sixteen aspirations in no doubt, taking this game 71-58.

There was chaos among the top in the preliminary weeks of college basketball, and quickly Purdue found themselves undefeated on top. This progress was halted by a hungry Rutgers team, who did not exactly begin their own season up to par. With just four seconds left, Trevion Williams took the lead. Rutgers raced up the court and Ron Harper Jr threw up a half-court prayer at the buzzer. Moments later the court had been stormed by the Rutgers faithful, as Harper Jr’s promise had been delivered.

6. Duke and Gonzaga give us an all-time November classic

Not all games between two top-five teams are created equal. Anybody who flipped to this one found themselves glued to every second of the action. In a matchup that reeked final four vibes, two top projected draft picks in Duke’s Paolo Banchero and Gonzaga’s Chet Holmgren went back and forth. Eventually, it was Mark Williams’ two-way efforts that gave the Blue Devils a signature 84-81 victory.

5. We crown a champion for the first time in two years

For the vast majority of the season, it was Gonzaga/Baylor…and then it was everyone else. The world was deprived of a December matchup between these two but as expected, they ended up meeting again, this time in the biggest stage possible. Not only was Scott Drew’s squad the first to take down Gonzaga that season but they did so in dominant fashion. After the 2019-20 season ended in a thud, March Madness was successfully completed and the Bears cut down the nets.

Last year’s March Madness was all about the Pac-12, who had several teams make surprising runs. At the top of this list is UCLA’s Final Four run as an 11-seed. To get there, the Bruins took down top-seeded Michigan behind the heroics of Johnny Juzang. He scored 18 points before injuring his ankle early in the second half. Juzang quickly received treatment and continued his dominance, finishing the night with 28 of UCLA’s 51.

3. Dick Vitale makes an emotional return to the booth

Dickie V is an icon across all of college basketball. However you feel about him as a broadcaster, you can’t deny that his passion for the sport as well as life, in general, is contagious. Vitale was diagnosed with bile duct cancer and this time it was the fans that returned the positive spirits amidst his battle. In November, he was finally cleared to once again do what he loved, and his emotions say it all.

Everyone loves a good Cinderella story. In this one, a singular player faced two power conference foes and simply took over. First, Abmas scored 29 in an overtime victory over Ohio State. Then, he put up 26 to take down Florida two days later. Finally, against Arkansas, Oral Roberts was one missed Abmas buzzer-beater from becoming the first ever 15-seed to advance to the Elite Eight.

1. Jalen Suggs’ “onions with a kiss” save Gonzaga’s perfect season

The game was incredible and the stakes were even higher. Gonzaga was not only undefeated but hardly even tested the entire season. That was until they ran into Johnny Juzang and UCLA in the Final Four. Juzang made a put-back lay-up with just 3.3 seconds left, giving Gonzaga just one possession to avoid a second overtime. That was just enough time for Jalen Suggs to get up a half-court shot and he absolutely nailed it, described perfectly by the legendary Bill Raftery.