What do Fans have to Look Forward to in the 2022 College Basketball Season? 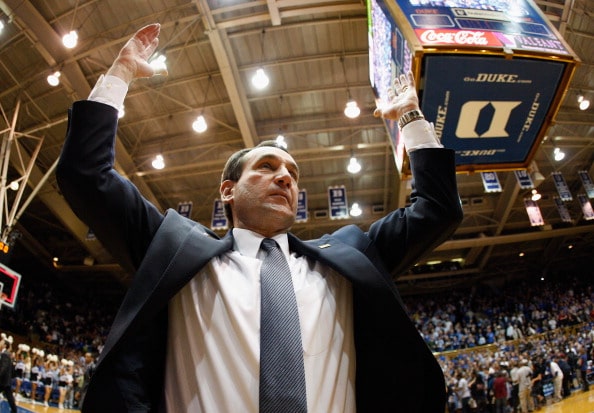 We have hit the halfway mark on the last season of arguably the most successful coach of all time’s career Coach Krzyzewski. This season has already dealt him several pros (Defeating #1 Gonzaga, current #2 in the polls), and cons (Loss to unranked Ohio State on the road, COVID issues). Still, as mentioned Duke sits in the #2 spot in the country, and with the ACC playing like a mid-major conference this season, Duke has the potential to go into March as a 1 seed and a tournament favorite. There wouldn’t be a story better than Coach K going out as a champion for the college basketball community.

Last year, throughout the season it was pretty obvious there were two teams better than the rest, Baylor and Gonzaga. The two of them sat in the top 2 spots all season, and you guessed it, faced each other in the championship. This season has already been so different. After just eight weeks, we have already seen four teams hold that #1 spot, and many teams jump in and out of the top 10. Baylor seems to be the favorite right now, but certainly not a clear favorite.

Duke, Purdue, Gonzaga, UCLA, and Kansas boast serious championship-level rosters as well, and teams like Iowa State, USC, Arizona, Auburn, and Michigan State sit as final four or better threats right now. Don’t count out teams like Villanova and Kentucky, who aren’t in that tier right now but have the talent and coaching to find their way there. If the season continues to move along this way, it will be extremely difficult to build a bracket, which is what all college basketball fans want.

No clear Player of the Year yet

Last year, Luka Garza was the preseason player of the year, and remained on top throughout the season, and won the Wooden Award easily. While college fans enjoyed trying to round out the rest of the All-Americans, the actual race was boring. This year, it’s really unknown who that will be. Guys like Ochai Agbaji, Benn Mathurin, Kofi Cockburn, EJ Liddell, Paolo Banchero, Oscar Tschiebwe, Keegan Murray, Drew Timme, and Jaden Ivey all stand a great chance at not only being All-Americans but player of the year winners. Several others can join this list in a matter of weeks, like Johnny Davis, Jabari Smith, and David Roddy if they continue to perform at a high level.

Baylor looking to go back to back

In college basketball, no team has won back-to-back titles since Florida, who did this in the 2006 and 2007 seasons. Baylor looks to have a real shot this year, with an undefeated record and the #1 ranking in the country at the moment. Unlike Florida, Baylor has done so with a completely revamped roster, with a combo of a stud freshman, a big-time transfer, the development of current players elevating to where they are right now, and of course a great coach. Baylor has shown no signs of slowing down this season, but with a tough Big 12 conference slate upcoming, we will be able to see if Baylor can raise that trophy once again in April.

A goodbye to the seniors

Every year, it is always hard to say goodbye to the senior class, who we have gotten to provide highlights and memories for us either as fans of the teams or fans of the game. This season, we will say goodbye to many, most notably Collin Gilespie, Ochai Agbaji, Buddy Boeheim, Trevion Williams, Antoine Davis, Andrew Nembhard, Kendric Davis, Alex Barcello, and Remy Martin.

They’ve already given us way more than any fan can ask for over the last 3.5-4.5 years, so now we enjoy their last run and see what they can do for their teams in these last few months.

A chance to make history for many teams

In the current Top 10, there are four teams who have never won an NCAA College Basketball Championship, Purdue, Gonzaga, USC, and Iowa State. That number increases to eight of the Top 15 teams and 15 of the Top 25 teams. As mentioned earlier, parity is at an all-time high this season, meaning we can see one of these teams hold up the trophy for the first time, and there are many who are capable. Purdue already received its first week as the #1 team in the AP poll ever, so adding to that would be special. For a team like Gonzaga, finally breaking the no championship streak after so many incredible seasons this decade would be very much deserved.