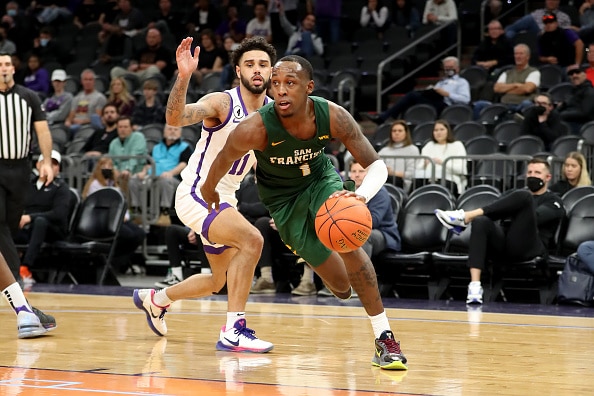 There are always teams that surprise the college basketball world early on. These five mid-major surprise teams have come entered our radar.

At the beginning of the season, everyone thinks they have the top teams pegged. Conference predictions are all the rage, and college basketball fans eat them up. The good news for the teams that don’t get the hype? The games actually have to be played. And now, there’s a sample size out there to start to square teams up for who they really are. Here are the mid-major surprise squads that had good vibes heading into the Christmas holiday.

The Horizon League has always been a sneaky good mid-major league. We took note here at CBB Review, putting Milwaukee, Cleveland State, and Detroit in our pre-season top 100. However, joining Cleveland State and Detroit in an early tie atop the standings are a mid-major surprise in the Oakland Golden Grizzlies. Oakland currently sits at 7-4 overall, but they have a win over Oklahoma State as well as impressive mid-major wins over Toledo, Vermont, and Delaware.

The Golden Grizzlies are paced by Marquette transfer Jamal Cain, who has been a revelation in Rochester, Michigan. Cain is currently averaging a double-double with 21.1 points and 10.1 rebounds per game. However, it helps when you also have a floor general like Jalen Moore, who is averaging an insane 7.3 assists per game through 11 games. Oakland was picked 6th in the pre-season in the Horizon League, but they look like they are here to stay as a title contender the rest of the way.

The Mountain West is certainly not a league that is slept on. It’s routinely one of the few mid-major leagues that get multiple bids most seasons. San Diego State and Utah State are two teams that have garnered a lot of attention the last few years. And, currently, Colorado State sits ranked 20th in the latest AP Poll. However, one team that is starting to turn some heads is the Wyoming Cowboys. Wyoming currently sits at 11-2, with a win over Pac-12 member Washington. The Cowboys just went 2-1 in a tournament in Hawaii, just narrowly losing to Stanford.

Wyoming has a one-two punch in Graham Ike and Hunter Maldonado. Ike leads the team in scoring and rebounding at 19.5 points and 8.4 rebounds per game. Meanwhile, Maldonado averages 17.3 points and almost six assists per game. Aside from an excellent duo like that, the Cowboys are one of the best teams in the country at not turning the ball over and taking good shots. That’s the kind of formula that can help Jeff Linder’s group finish much better than their pre-season prediction of 8th in the Mountain West.

The Southern Conference is another league that’s tough night in and night out, and often gives power conference teams headaches. Half of the league has gotten national attention of some kind over the past few seasons, and Furman and Wofford have both been ranked in the AP Poll during that same time period. Samford typically isn’t included as a basketball power, but the Bulldogs are looking to change that narrative this season. They are off to a blistering 10-3 start, including 7-3 against D-I competition. Those wins include an Elite Eight team last year in Oregon State and Ole Miss, their best win of the season.

One of the biggest things helping with this mid-major surprise is Florida transfer Ques Glover. He has shined in his first season with Samford by averaging 19.3 points per game and making spectacular plays. Meanwhile, Jermaine Marshall has been a beast down low, snagging 8.8 rebounds per game along with 11.7 points per game. Getting good looks in the paint and rebounding are the strengths of this team. Samford will be tested in SoCon play, but Glover will be a handful, and the Bulldogs look poised to blow their pre-season standings prediction of 8th out of the water.

When you think of the Summit League, you think of the Dakotas. South Dakota State and North Dakota State have run things in this league for the past decade. However, perhaps a new challenger is emerging for the 2021-22 season. The Western Illinois Leathernecks are off to an impressive 10-4 start on the season, including an opening game win over Nebraska on the road. Furthermore, their three of their four losses have come by just a combined 16 points, proving the Leathernecks are more competitive than ever.

Will Carius leads the way at 17.4 points per game. Northwestern State transfer Trenton Massner is not far behind at 16.2 points and 5.9 rebounds per game. A combination of hot three-point shooting along with solid defense are what’s carried the Leathernecks thus far. WIU looks to speed you up on offense, though they will have to cut down on sending teams to the free-throw line. Western Illinois has already matched their best win total in the past four seasons, and are looking to potentially win 20 games for just the fourth time as a Division I program.

When you think about the West Coast Conference, you think about Gonzaga. Then, once you look past the Bulldogs, it’s usually Saint Mary’s and BYU after that. However, the Gaels and Cougars look like they are getting shoved aside by the biggest mid-major surprise of the season. The San Francisco Dons are off to a 13-1 start and are looking to make the NCAA Tournament for the first time since the 1997-98 season. Thus far USF’s profile includes victories over Arizona State, Fresno State, and Davidson.

Jamaree Bouyea has been a stud for the past few seasons for the Dons, and is currently leading the team in points and assists at 17.8 and 3.7 per game, respectively. Yauhen Massalski paces things in the paint at 13.6 points and 7.9 rebounds per game. San Francisco relies on the strength of its defense, ranking 18th in the nation according to KenPom. The Dons have only given up more than 70 points three times this season, and their only loss to Grand Canyon was a final score of 49-48. San Francisco continues to receive votes in the major p0lls, and the Dons appear to be a real threat in the WCC to everyone not named Gonzaga, though an upset of the Bulldogs isn’t out of the question this season.