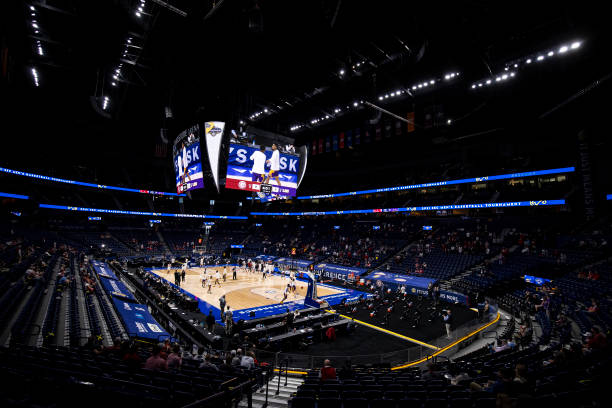 Ranking the top 10 college basketball conferences so far this season.

With Baylor leading the way as the number one college basketball team in the country and defending national champions, the Big 12 gets ranked first slightly ahead of the SEC. The league boasts three top 10 teams, with Kansas at No. 7 and undefeated Iowa State at No. 9. What also puts the Big 12 over every other conference is the amazing depth, with every team in the conference having at least seven wins. The 10 team conference could have eight tournament teams come March, which speak to the quality and depth overall.

The second conference on our list is the SEC. The Big Ten also could have occupied this spot, but the overall depth of the SEC gives them the nod here. While there has not been a dominant, top-flight team so far, all 14 teams in the conference have at least six wins except for one, which is a very impressive feat. Also, undefeated LSU, one loss Auburn, and two loss Kentucky are teams that could go on a legitimate NCAA tournament run.

Many will disagree with the Big Ten being ranked as only the third-best conference in college basketball, especially with the high level of dominance from Purdue this season. However, once you get past Purdue, no team jumps out as a team that could challenge for a national championship. There are some sleeper teams in the conference that are unranked. Illinois is a team that is better than their record and has one of the best players in the country in Kofi Cockburn. Minnesota at 9-1 has also flown extremely under the radar. But there are just a few too many bad teams at the bottom of the conference to put them any higher on this list.

The Big East is back! Well, not to the level it once was, but the 11 team conference has nine teams with nine or more wins so far this season. The wins have also been quality ones. No. 15 Seton Hall has defeated previously ranked No. 4Michigan, and currently ranked Texas. Providence has won at ranked Wisconsin and UConn. Even usual bottom-dweller DePaul has nine wins so far.

Add UConn, Creighton, and St. Johns as teams that have also been playing well, and you can see the depth of the conference, and we haven’t even mentioned Villanova yet. If Villanova can get back to its early season form, the Big East could be ranked even higher as the season goes on.

While the Pac 12 does not boast the depth of the college basketball conferences above, it has three legitimate national championship contenders, all ranked in the top 10. Arizona has the top-scoring offense in the entire country, and UCLA and USC have been as good, if not better than advertised. Any three of these teams could make the Final Four and it would not be a surprise.

The Pac 12 would be ranked higher if the bottom of the conference was not playing so poorly. Couple that with Oregon’s very surprisingly bad start, and this may only be a conference that gets four teams in the tournament, depending on how Colorado and Washington State keep playing. The Pac 12 could see its ranking change however, since there are always a few surprises during conference play.

What a world we are living in. Never did I think a day would come where the WCC would be ranked ahead of the ACC, but here we are.

This conference is not just Gonzaga and everyone else anymore. There are four legitimate teams that need to be recognized and taken seriously. The most surprising team has been The University of San Francisco Dons, who have posted an 11-1 record so far. Usually, decent BYU is also having a great season at 9-2, and always good Saint Mary’s is 10-3. Those teams along with Gonzaga could make up four teams from this college basketball conference making the tournament, which has not happened in the history of the West Coast Conference.

This is the most mediocre ACC we have ever seen. Apart from Duke and Wake Forest, none of the other teams in the conference have more than nine wins. It is shocking to think about all of the five teams the ACC had ranked before the season started, only to have all of them except for Duke, be a huge disappointment. There is not much else to say about this conference unless some of its perennial blue bloods start to play better. I do expect Louisville, North Carolina, Florida State, and Virginia to all improve when conference play starts, and if Wake Forest keeps playing at the same level, the ACC does have a chance for improvement.

The top three teams in the Mountain West are having incredible seasons so far. No. 21 Colorado State is one of only six remaining undefeated teams in the country. Wyoming is just outside the top 25 and is 9-1, with their only loss coming against undefeated Arizona. Fresno State has also reached nine wins but has played a very easy schedule compared to the other two teams above them.

This conference also has decent depth, with Air Force and San Diego State both at 7-3 and Boise State and Utah State each at 8-4. If UNLV can shake off its slow start and be the team it was expected to be, this could be one of the most underrated conferences all year and could move ahead of the ACC when these rankings come out again in a month.

Memphis was supposed to be the crown jewel of this conference and one of the best college basketball teams in the country with star recruits Jalen Duren and Emoni Bates, but they have failed to live up to the hype with a mind-boggling 7-5 start.

The conference would be ranked much higher if Memphis was the team it should be. That has not stopped the American from being a decent conference from top to bottom. Number 13 Houston has played a great schedule and is 10-2 on the season. They have had to carry the flag for the conference in Memphis’ absence. Apart from Houston and Memphis, Cincinnati and UCF are teams that have a chance at a run to the tournament, and we know to never count out Wichita State either.

The Atlantic 10 does not have a single stand-out team and is the most balanced college basketball conference by far, with five of its teams with eight wins, and the next four with seven apiece. Only two of the teams in the conference are under .500.

Having said all of that, it is unclear if any of these teams will separate themselves as a team that can win a few games in the NCAA tournament. The one with the best chance may be St. Bonaventure, who has won over Boise State and Marquette and was a preseason darling among many prognosticators. For the Atlantic 10 to move up, it would need to have at least one team to stand out above the rest. So far, that has not happened.