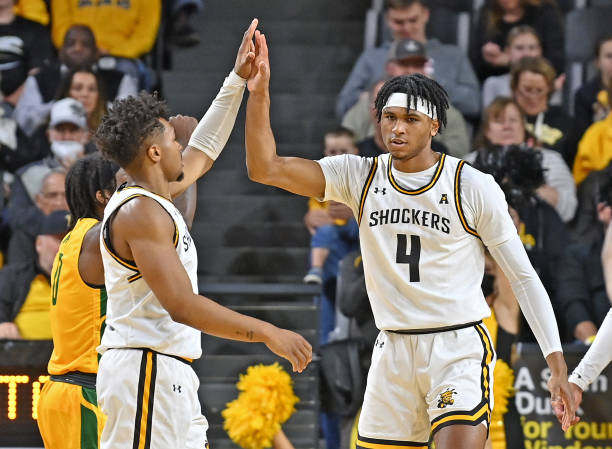 It was one of the lightest schedules of the year in the American Athletic Conference, due to COVID cancelations and holiday break.

The American Athletic Conference seemed to be preparing for conference play as teams had a more accessible competition to fine-tune their teams. A couple of vital players are out for the year, and a couple of teams deal with the effects of Covid protocols in both their programs and other teams’ programs. With Christmas this week, the number of games was reduced with athletes being on Winter break. I hope everyone had a happy holiday!

Highlights from tonight’s 76-67 win over Tennessee Tech—presented by @pepsi:

The Bearcats defeated the Tennessee Tech Golden Eagles 76-67 to move to 10-3. Cincinnati created second-chance points again, grabbing 13 offensive rebounds and forcing eight steals. While they struggled from three-point range, Cincinnati was also not aggressive. The Bearcats only got to the free-throw line nine times. Cincinnati was supposed to travel to No. 13 Houston to open conference play on Tuesday, December 28, at 8 p.m. but that has since been canceled.

The Pirates grabbed a 68-67 win over Southern Miss Golden Eagles to advance to 9-3. East Carolina basketball ground out in all the ways that matter. The Pirates showed heart as the team created second-chance points, grabbed offensive rebounds, caused steals, and got to the charity stripe.

ECU struggled shooting and didn’t move the ball well. While they shot the ball poorly from beyond the arc, the Pirates went 18-of-24 from the free-throw line. They’ll travel to Wichita State on Wednesday, December 29, at 7 p.m.

The Cougars dominated the Texas State Bobcats winning 80-47 to move to 11-2. Houston basketball was led by UConn transfer Josh Carlton, who scored 20 points.

The team shot 55% from the field and 46% from beyond the arc. Coach Sampson has taught them to move the ball well and play strong defense. The Cougars only grabbed nine offensive rebounds, which is a little shocking as this is an area this team is known to dominate.

There are a few upsetting factors for the ranked Houston basketball team with all of the good things. The team announced the season-ending injuries for Tramon Mark and Marcus Sasser and postponed its first conference game to Cincinnati due to COVID. However, the American Athletic Conference has opted to let teams reschedule games on their own end. Losing these players and being hit with COVID, the Cougars will look very different going into AAC play.

Houston’s game against Cincinnati on Tuesday has been canceled.

Having a week off due to COVID protocols, the Memphis Tigers will travel to Tulane for a conference opener Wednesday, December 29 at 8 p.m.

Another team that got an off week as NCAA rules put Evansville basketball in COVID protocols, SMU travels to Tulsa on Wednesday, December 29 at 8 p.m.

Temple had one of its best games of the season against Delaware State. The Owls shared the ball, found open shooters, and knocked down shots. Temple dominated every statistical category, winning 85-48.

The big surprise was Zach Hicks coming off the bench with 35 points. With Hicks and Dunn dominating, the hope is that the other players will provide well-balanced scoring as role pieces. The Owls have one more non-conference game as they play Philadelphia rival Villanova on Wednesday, December 29 at 9 p.m.

Tulane basketball missed a game against New Orleans due to COVID protocols. The Green Wave hosts Memphis on Wednesday, December 29, at 8 p.m.

Tulsa basketball missed a couple of games due to COVID protocols. The Golden Hurricane will host SMU on Wednesday, December 29, at 8 p.m.

Another hard fought W in the books 📚@AustinRLyon and @MOD4three break down the win tonight over North Alabama. #ChargeOn pic.twitter.com/KACpMl6tXb

UCF basketball defeated North Alabama 75-64 to improve to 8-2. The Knights struggled to shoot from beyond the arc, going 3-of-21 for 14.3%. The more significant issue was that UCF turned the ball over more than North Alabama. The Lions only had four steals, which means that seven turnovers were due to poor ball handling.

The strong American Athletic Conference teams seem to have in common the ability to dominate the boards on both ends. The Knights grabbed 41 rebounds to the Lions 24. With the less than ideal three-point shooting, UCF grabbed ten offensive rebounds and had seven steals to help seal the win with second-chance opportunities. UCF will have its last non-conference game against a resume-building team in Michigan on Thursday, December 30, at 7 p.m.

USF basketball went to Hawaii to play in the Hawaiian Airlines Diamond Head Classic and played three games. The first was against BYU, where the Bulls lost 54-39 in the opening to the classic. USF then went on to beat Hawaii 76-69. Wrapping up the weekend with a loss to Wyoming 77-57, the Bulls move to 5-7.

South Florida needs to figure out what its identity is. Coach Gregory has a talented team, but the team plays a lot of one-on-one basketball and relies too much on defense. After a couple of abysmal three-point shooting games, the trend continues to be rough. The Bulls need to move the ball and create lanes to get to the free-throw line, get dunks, layups, or pull up for the easier shots.

With all of this, USF continues to create turnovers while taking care of the ball. The Bulls will have one last non-conference game as the team hosts Mississippi Valley State on Wednesday, December 29 at 7 p.m.

Wichita State played a much better game this week against a team that has yet to record a win in Prairie View A&M. With Craig Porter and Joe Pleasant out due to injury, the rest of the starting lineup came out on fire.

With Clarence Jackson and Qua Grant starting, the Shockers opened up a 20 point lead and never lost it. The Shockers moved to 9-3 on the season and 6-2 at home with the 102-66 win. Only Grant and Ricky Council struggled to shoot and were the only two players not to reach double digits.

Wichita State basketball was very aggressive, getting to the line for 37 free throw attempts. They also dished out a notable 20 assists, had 12 steals, and blocked nine shots. Hopefully, the Shockers will bring this into conference play, but I am worried the team falls behind and struggles. The Shockers open conference play on Wednesday, December 29 at 7 p.m. vs. East Carolina.

While most teams are starting American Athletic Conference play, the few teams don’t have solid resume-building opportunities. UCF is against a very solid Michigan team and Temple will play ranked Villanova. I hope that players across the NCAA can remain healthy and safe from COVID.