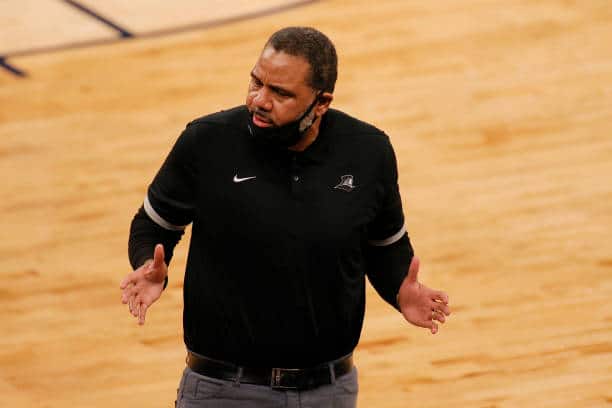 Providence basketball held off a late Seton Hall run to pick up a top 15 win.

Providence basketball showed a lot of grit taking down a COVID-riddled Seton Hall team at the Dunkin Donuts Center. Five Friars scored in double figures in the win as PC held Jared Rhoden to just 10 points on 4-of-12 field goals.

The Pirates led or were near the lead for most of the first half.

Then Noah Horchler took over.

The sixth-year big man hit four threes to cap off the first half, putting Providence basketball up nine at the half. Horchler finished with 17 points and 13 rebounds, adding three blocks and another made three in the second half.

Ed Cooley has a lot of tough guys inside, but Horchler’s ability to stretch behind the line is a very important trait for this team.

The Pirates were left with just eight players on the road against a very good Providence Friars team. One of those was Jo Smith, who isn’t even a rotation player for Kevin Willard.

Somehow, Seton Hall was able to keep it close and make a last gasp effort to only lose by five points. But it was easy to tell at times that individual conditioning wasn’t the same and not having two starters had them in a rut.

Tyrese Samuel and Ike Obiagu are also two very important players, especially against a physical Friars team. Willard still got his guys up for the challenge, but it wasn’t a SHU team remotely near full strength.

This isn’t a knock on Seton Hall’s toughness, because that’s how the Pirates were even able to stay in the game.

But the Friars had so much physical and mental toughness throughout. Head coach Ed Cooley had me wanting to suit up during a second-half timeout:

brb, finding a brick wall to run through pic.twitter.com/3fmqoUN121

Jared Bynum showed a lot of it down the stretch, coming up with some really hard-fought buckets in crucial moments. The Big East is truly a gauntlet, and Providence basketball is built for it.