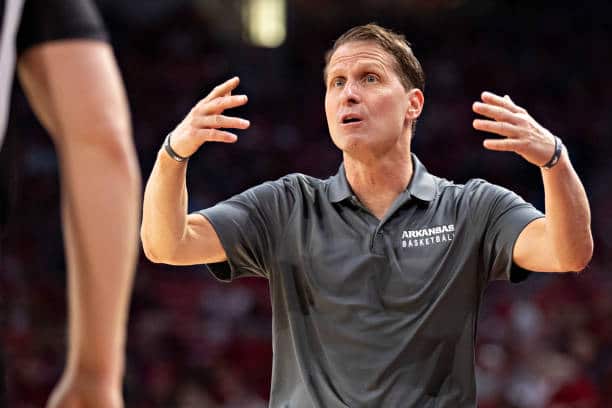 Christmas is a time to spread joy and for these college basketball teams, an added boost would always be welcomed.

The Blue Devils have been all frontcourt with issues in the backcourt. Trevor Keels is shooting a team-low of 35.9% from the field among starters. Jaylen Blakes has been even less consistent off the bench and Jeremy Roach (other than a big bucket against Gonzaga) hasn’t made any major improvements from last year.

Of the three, Keels has looked the best, but Duke needs one of them to step up and give the backcourt something. It can’t just be Paolo Banchero, Wendell Moore Jr., and Mark Williams.

The Boilermakers are going to move into the first spot in the rankings by Monday. They can solidify their spot there with wins over Iowa, Rutgers, NC State, Butler, and Incarnate Word.

Those are some tests but it’s definitely a lighter part of the schedule as Big Ten play heats up down the road. 12-0 would cement Purdue in first place for a while.

3. Gonzaga: Get more out of Drew Timme

I really had to think hard about this one because Gonzaga has about zero flaws – which can’t be said about a lot of teams.

The only glaring gap if you will has been Drew Timme, whose scoring and rebounding production have both taken slight hits. However, adding Chet Holmgren to the mix was almost sure to affect Timme’s play just a bit. Gonzaga’s also had the toughest schedule in college basketball, so once they can rest a bit, Timme will likely return to full form, if not even better.

How’s Alabama up next for a bit of ease in the schedule? Sheesh, Mark Few!

4. Baylor: A win over Villanova

The Bears have done just about everything right on their way to a 7-0 start and as a one-time critic, I’m fully on board with this Baylor team as a Final Four contender.

How can they prove me even more wrong from my preseason thoughts? Take down Villanova on December 12. Now, a loss wouldn’t be the end of the world because they’ve set their mark already, but a win would really put the Bears in an elite category early on in the season.

The Bruins are only averaging 6.3 steals per game, which isn’t a major issue but can be turned into an asset to strengthen an already above-average defense.

Only Jaime Jaquez Jr. and Myles Johnson are averaging over a steal per game, so if the Bruins can turn it up with their on-ball defense and deflect more passes, it would set them apart even more entering Pac 12 play.

6. Villanova: An inside presence

Eric Dixon is a beast but starting a 6-foot-8 guy at the center isn’t exactly compelling in a Big East conference where Nova’s biggest contenders – UConn and Seton Hall – both have a lot of height.

Now, at 5-2 and after a win over Penn, the Wildcats still look like the cream of the crop in the Big East. But it’s a frontcourt that could have some trouble as the season moves along.

7. Texas: Someone to take the lead

It’s driving me absolutely nuts how balanced this Longhorns team is and maybe that’s just going to be their style of play this season. But for how good of scorers Timmy Allen and Marcus Carr are, I really expected at least one of them to average over 15 points per game.

This might just be a personal pet peeve more than what Texas really needs, but it could still settle some things, especially when choosing who to go to in game-closing situations.

8. Kansas: Something out of David McCormack

David McCormack has not looked himself this season. The big man is averaging five points less than he did last season and is also seeing noticeably lower numbers in rebounding.

Now, on the defensive end, he’s been even better than advertised. However, offensively, it hasn’t been his year – against Dayton, he was 2-of-6 from the field for five points and five rebounds.

Rupp Arena would explode with Christmas cheer if the Wildcats can take down the Buckeyes and Cardinals.

Ohio State’s win over Duke puts UK in a position to prove itself and get one against the team that conquered the Blue Devils. Four days later and it’s a chance to overtake their arch-rivals.

The Razorbacks could be this year’s surprise team that’s still undefeated on Christmas Day. Leading up to their first SEC game against Mississippi State on December 29th, Arkansas has Little Rock, Charlotte, Oklahoma, Hofstra, and Elon. Obviously, the Sooners pose the only challenge, so we could see a 12-0 Arkansas team.

With the Wildcats’ most recent game against Washington being canceled because of COVID problems within the Huskies’ program, it puts Zona in a tough place. On one hand, the rest will allow a 6-0 team to be extra fueled.

However, here’s hoping Arizona doesn’t have to miss another game because of this. We saw last year how easy it was for teams to get out of a rhythm having not played for a while. Arizona’s next scheduled game is Oregon State – 8 days after their last game against Sacramento State.

The Cougars dropped to 6-1 with a road loss to Utah Valley but up until that point have been playing lights out. Next week, they’ll face Utah State and Creighton. Two wins there could put the Cougars in a fantastic position with a resume suited for March.

13. Tennessee: Get more out of Victor Bailey Jr.

The super-senior has struggled on a Vols team that posts incredible depth. Bailey is averaging career-lows with 5.8 points, 0.8 rebounds, 36.1 FG%, and 28.0 3P%. Tennessee has been totally fine without him playing at his best, but if Bailey Jr. can turn it on soon, the Vols can catapult into the national conversation more than they already are.

The Gators rank 216th in the country in field goal percentage at just 43.2% as a team. Only Wisconsin is shooting a worse number from the floor but what makes it worse for Florida is having Colin Castleton down low who certainly rises the overall number with his play.

6-foot-11 UConn transfer Josh Carlton could solve the inside ‘issues’ if you even want to call it that for Houston.

The Cougars do have Fabian White, but 6-foot-8 will only take you so far inside. Carlton’s been decent, but if he can give Houston an even bigger lift inside, they can run away with the American yet again.

The Crimson Tide has some of the best young talents in college basketball but someone must have forgotten to teach them the importance of free throws.

Through seven games, Bama is averaging 64.0% from the line, sub-300 in college basketball. Guards Jaden Shackleford and Jahvon Quinerly are both well under 70%, which isn’t a good look as the two leaders of the Tide.

It’s not a major issue, but UConn currently averages the fourth-most turnovers per game among Big East teams with 13.5.

While that could be a lot worse, it’s more about who the culprits are with the most giveaways. Andre Jackson and Adama Sanogo are both sophomores who have become mainstays in the lineup. Coach Dan Hurley relies on them for a lot of areas, but controlling the basketball will have to be something they improve on.

18. Memphis: Someone to run point

Just watch one Memphis game and you’ll understand what I’m saying. It’s not that the Tigers can’t get assists and find open teammates. But the movement is awkward with no true point guard.

Against Georgia, Memphis accounted for 15 assists. That’s a good number. It didn’t translate to a win, but it’s at least a move in the right direction after just 8 assists in a blowout loss to Iowa State.

There’s not much at all you can say bad about this Cyclones team. A win over their rivals at home would put the icing on the cake for an incredible start to the season.

Against Arkansas-Pine Bluff, there was literally nothing to complain about, and that’s been the story of Iowa State this season. The Cyclones won by 19, shot about 45% from the field, dished out 19 assists, won the rebounding margin by 11, made 16-of-20 free throws, and committed just 9 turnovers.

Want a Christmas present, Ames? How about a top ten in the country in two weeks?

20. USC: Someone to teach free-throws

The Trojans are even worse than Bama – and by a long shot. USC is third-worst in the entire NCAA at free throws, at 57.36%. Among the 8 rotation players averaging at least 10 minutes per game, Joshua Morgan is the only one connecting on at least 70% of his attempts from the line.

The Pac 12 has turned a bit more open with Oregon’s struggles, but USC will need to find some free throw help if they want to be serious about competing with UCLA.

Can we just take a moment to look at Auburn’s resume to this point? The Tigers are 6-1 with wins over some pretty respectable mid-majors in Morehead State, Loyola Chicago, and UCF. They blew out Syracuse and took UConn to double overtime.

Even more, Bruce Pearl has a star freshman in Jabari Smith. Smith might wind up being the best freshman in college basketball in a class that includes Paolo Banchero and Chet Holmgren. Against the Knights, he had 20 points on 6-of-12 shooting, 7 rebounds, 4 assists, and 3 steals. He does a little bit of everything. Auburn is looking like a top-ten team.

Through eight games the Spartans have coughed up the ball over 125 times, good for 16.1 turnovers per game. That sloppy play won’t slide once Big Ten conference play starts up, so Tom Izzo’s bunch needs to figure it out in a hurry.

Other than Tyson Walker, it isn’t a very veteran backcourt. Pushing through those initial learning curves as a freshman is a tough adjustment, so by Christmas Day, we could see a positive change.

The Badgers are bricking threes at a 30.13% clip, good for 278th in the nation. Brad Davison may have shot out of his slump, going 5-of-9 against Georgia Tech after starting the season extremely cold from downtown.

However, some of the other guys like Chucky Hepburn and Steven Crowl have got to become more of a threat from downtown so Wisconsin can become a bit more multi-dimensional.

Michigan has missed Franz Wagner and Isaiah Livers but it’s been even more obvious with no one stepping up to help Hunter Dickinson and Eli Brooks. After those two, no one is averaging close to 10 points per game. DeVante’ Jones could be the hero.

Against North Carolina, the offense was the worst it’s been. Dickinson got into early foul trouble and Juwan Howard’s crew couldn’t find anyone to step up and put the ball in the basket. The Wolverines need help now.

Cale is the heart and soul of this Pirates team. Without him, they’ve been able to survive, but it hasn’t been against the greatest competition. Next week, Seton Hall hosts Texas and Rutgers.

If Cale is back for those games, it will give Seton Hall a chance to improve to 9-1 and really insert itself into the talk for a top 15 team in college basketball. If they don’t, they’ve still got the talent to win both games, but Cale’s health will go a long way into how deep the Hall will be.