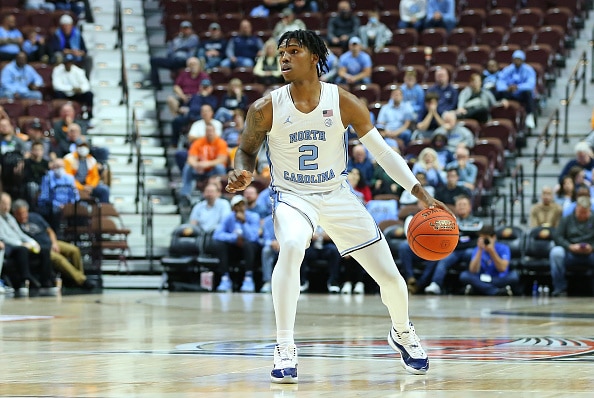 Both teams have been underwhelming so far this season, but UNC basketball proved not only are they still a threat in the ACC, but also in the country.

UNC basketball used a dominant second half to defeat Michigan, 72-51. Caleb Love was the star in this one, leading all scorers with 22 points and adding 4 rebounds, 4 assists, and 3 steals. Moussa Diabate led the way for Michigan with 13 points.

Takeaway #1: Caleb Love is the best guard in the ACC

After a solid freshman year, many people hoped that he would take another step for North Carolina basketball, and he’s done just that. He’s scored 22 points three times this season and asserted himself as an elite college basketball player. Today, he was a huge reason behind their second-half spark and will continue to do so throughout the season.

Hunter Dickinson was a preseason All-American after a stellar freshman year and was a big reason why Michigan was ranked high in the preseason polls. Today, he only took 5 shots and scored 4 points. Michigan will never win a game when Dickinson shoots the ball at such a low volume, and that’s a big reason why they’ve struggled this season. This is the 4th game this season in which he’s taken under 10 shots, so Coach Howard will need to reassess his game plan and find ways to give Dickinson the ball as Big Ten play sneaks up.

This season, UNC basketball has averaged a disappointing 12.4 turnovers per game. Today, they got it done, committing only six turnovers against the Wolverines. Everyone knows that winners don’t commit turnovers, and this was the case today, with Michigan committing 13 themselves. If UNC can continue to hold onto the ball like they did tonight, promising things will come with it. For Michigan, holding valuing the ball on the road has to be better.