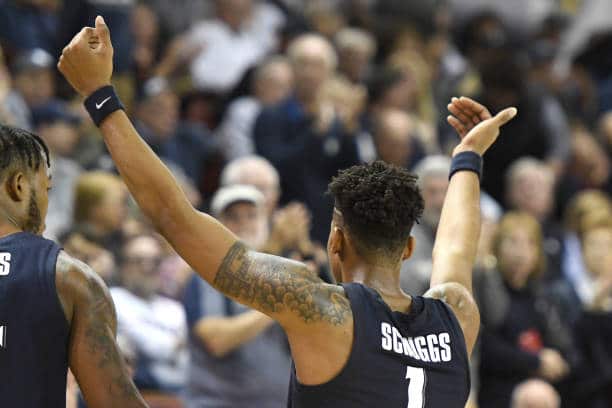 Xavier basketball played some of its best ball when it mattered most throughout the game. Whether that be the final minute or any time Ohio State started a mini-run of their own, the Musketeers were there and ready to maintain the lead. A Paul Scruggs dunk over EJ Liddell capped it off.

The nastiest dunk of the season so far, courtesy of Xavier’s Paul Scruggs. On E.J. Liddell, no less. Lefty. Filthy. pic.twitter.com/MgjAeOZKo6

Throughout the game, the Musketeers always had the one thing going for them and that was the ball movement. They consistently made the extra pass when they needed to which led to good shots along with making quick passes and flashy finds to get easy buckets.

Although Xavier only had 14 assists they moved the ball precisely, even if some passes may not have led directly to scores. Scruggs and Adam Kunkel both had four assists and it is being shown how much of a balanced duo they make as the lead guards for the starters and the bench respectively.

Xavier basketball’s bench scored 32 points out of their 71 for the game. That is an incredible ratio for a bench made up of just three players to have that much impact especially in a game against a nationally ranked team. All of the bench guys that played got significant minutes, so while Travis Steele only went eight-deep, all of them mattered.

Dwon Odom scored eight points and helped Xavier basketball get their starters some key rest. Kunkel scored ten and assisted on four baskets. He was also a key piece on defense and although he had four fouls, it didn’t end up making a huge difference. Jack Nunge had a double-double with 14 points and 14 rebounds playing crucial minutes as Deonte Miles was in foul trouble and fighting through an injury.

Ohio State rejected nine shots, an absurd amount and nearly double Xavier’s block total. What’s even more impressive about Buckeyes is the fact that eight of them came from Liddell. Liddell was a beast on both sides of the ball but tonight he played the definition of a two-way player. If he keeps this up he will be in the running for not just Big Ten Player of the Year, but possibly National Player of the Year. If Zach Freemantle was able to suit up, it may have made a difference, but even then, the Buckeyes clearly have a big-time frontcourt.