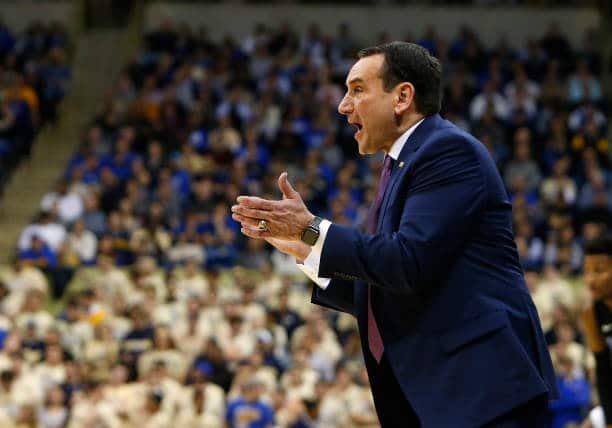 The major story of Duke basketball is Mike Krzyzewski’s last season, and that might just be enough to throw off other teams from this talented squad.

With Hall of Fame coach Mike Krzyzewski announcing his retirement after the 2021-22 season, naturally, all eyes have turned to that as the season-long overarching story surrounding Duke basketball.

However, this is a Blue Devils team that welcomes in the nation’s number two overall recruit, two other five-stars and three starters from last season. Another feared transfer in Theo John from Marquette adds to the already above-average frontcourt depth. The Cameron Crazies have a reason to go insane for this season.

It appears as if Duke basketball freshman AJ Griffin is active in practice.https://t.co/9RXehElG8w

Banchero is quite the specimen, as the massive big man can run the break, knock down threes and draw the opposing team’s best defender as a freshman from day one.

Banchero opened up Duke basketball’s first scrimmage with the first points of the game and that’s exactly what he’ll do all season long. He’s the most efficient and most talented bucket getter for this Blue Devils team and as a first-year player could win the ACC Player of the Year award.

As it should be, a lot of hype is placed on Banchero to open up the season. He’ll have to grow through that, but the potential number one NBA draft pick in 2022 should have few lapses this year.

Last season’s starting point guard, Roach looks to find his footing more in year two. He has an all-star team around him, but Roach will need to elevate his gameplay to bring Duke basketball to the next level.

The Blue Devils don’t have a spectacular point guard and depth is an issue off the bench. However, Roach could be that guy if he takes the next step, and in the process would give Coach K his best starting five in some time.

Theo John is one of the Big East’s hardest-working players of all time and will fit right in on this Duke team. Assuming AJ Griffin comes off the bench for Wendell Moore, Duke will have a guy who could start on most teams coming off in relief as a versatile wing.

Jaylen Blakes will have backup point guard duties, which is probably where this Blue Devils fanbase senses the most uncertainty. Joey Baker and Bates Jones are the role players that will need to make the most of their minutes by hitting open shots and bringing energy off the bench.

Overall, Duke has the least amount of questions it’s had in recent preseasons, especially with a healthy Griffin. The biggest issue is at point guard, but who knows, maybe the all-world Banchero could fill in if needed.

Duke basketball finished ninth in college basketball in near proximity field goals last season. With the addition of Banchero, who will be virtually unguardable inside, I wouldn’t be surprised to see another top ten finish this season.

Duke also lost two three-point specialists in Matthew Hurt and Jalen Johnson and didn’t necessarily replace them evenly. While the Blue Devils have enough guys who can hit from deep, I expect an even more paint-focused offense, whether that be throwing it inside to Williams or letting Banchero create shots from the outside-in.

Kentucky, Gonzaga and Ohio State highlight the Duke basketball schedule that is once again one of the hardest non-conference slates of any team in the country. An ACC schedule that includes North Carolina, Syracuse and Virginia all twice doesn’t make it any easier.

There will be games that Duke’s (lack of) depth could haunt them. However, Coach K can do more with less and the Blue Devils will be able to get past any worries in that department.

Duke is one of the few teams that we’ll just have to wait and see because of a player like Banchero. If he’s even half as good as advertised, the Blue Devils are a Final Four contender. However, I like to be a bit careful to begin the season.