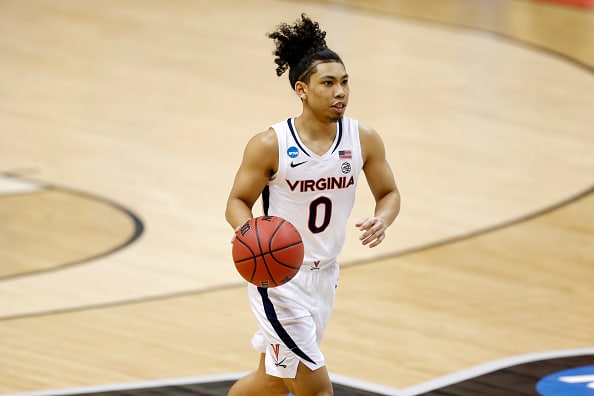 Despite losing three of its top four scorers from last season, Virginia basketball still looks to compete at the top of the ACC.

Tony Bennett recruited two of the most desired transfers, bringing Virginia basketball right back into the college hoops conversation. Now, in Kihei Clark’s senior year, the Cavaliers will have an interesting road back to the promised land, maneuvering through a very strong ACC.

2020 was a rough year for the Virginia basketball three-year starter. Although he averaged a career-high in points (10.8), his shooting percentage was an abysmal 37.5% from the field. 2021, with more scorers present, Clark looked more comfortable on offense, averaging almost 1.5 fewer turnovers per game and shooting at a higher clip.

However, his shooting from beyond the arc took a hit, dropping from 38% to 32.3% percent, despite shooting 41.1% from the floor. He will have to adjust to having fewer scorers around and must be more careful with the basketball than two seasons ago. However, in his senior year, Kihei Clark is bound to have his best season yet.

Shedrick missed a portion of last season due to undisclosed reasons, and Justin McKoy (transferred to UNC) stepped up and took some of Shedrick’s minutes. However, Shedrick is back, and he steps into a starting role this season with Jay Huff also moved on. Virginia basketball only has two true big men on the roster, and Shedrick has the most athleticism out of the two.

He found great success in slashing to the hole last season, as well as cleaning up missed shots. He also showed promise in the post, flashing some Mamadi Diakite characteristics. Shedrick needs to take the next step on both sides of the basketball, meaning adding even more to his offensive game and being tougher and stronger on defense, for Virginia to be successful in this “rebuilding” year.

Tony Bennett is working with a very short bench this season. After losing three of his top four scorers from just a season ago, as well as three other key bench pieces, Bennett had to scramble to bring in some reinforcements. Although the starting lineup does look like it can compete at the top of the ACC, the bench lacks depth and talent. Taine Murray will be an exciting prospect to follow, but it looks like Virginia must ride out their starting five to have a successful run this year.

Since Tony Bennett took over at Virginia in 2012, Virginia has been a defensive nightmare for their opponents. When the ‘Hoos are at their best, the defense is smothering. Last season, Virginia’s defense was the worst it has been since Tony Bennett took over, allowing 93.3 points per 100 possessions according to KenPom. Since 2013, Bennett’s second year in which Virginia did not even make the dance, Virginia has not fallen out of the top 10 in adjusted defense or points per 100 possessions. Last season, they were ranked number 36. Keep an eye on that metric before you gauge how good Virginia actually is.

Virginia is projected to finish fourth in my ACC preview, falling behind Florida State, Duke, and North Carolina. However, there are many good ACC teams, such as Virginia Tech, Louisville, and Syracuse, that could easily replace Virginia basketball for the fourth seed in the ACC Tournament and receive the coveted double-bye.

Virginia basketball has an easy schedule in the non-conference portion of their season, only playing two Power Five teams in Iowa and Georgia. However, the ‘Hoos toughest matchup will be against Houston on the road. A win there would give Bennett’s squad a very solid resume boost.

In conference, Virginia basketball only has one game against Florida State and North Carolina. However, two games against Duke is Virginia’s most difficult test in the season. The last time Virginia played Duke twice in the same year, Zion Williamson and co. brought the hammer down, beating the Wahoos twice. But Virginia got the last laugh, winning the National Championship. History repeats itself, right?