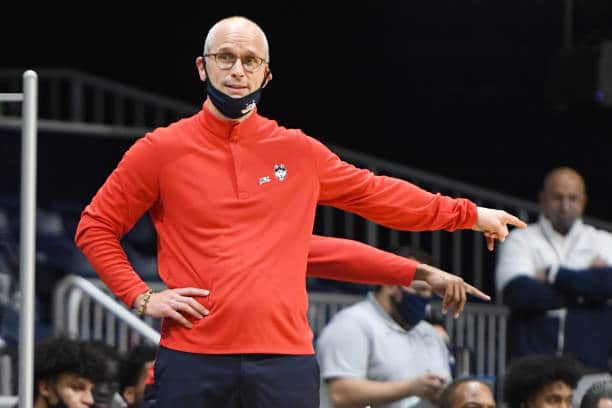 UConn basketball moves past James Bouknight and into a deeply talented roster that could be a contender in the Big East.

UConn basketball looks to move past James Bouknight in style as plenty of starters and talented newcomers fill this Huskies roster.

Dan Hurley has the best team pre-season on his hands since coming to Storrs, and he looks to carry that out throughout the regular season.

One might be tempted to go with R.J. Cole here because he’s the best bet to lead the Huskies in scoring and assists. However, if you saw how well Sanogo played in the paint in the roughest conference in college basketball – as a freshman – you’ve got to be liking how well he can play this season.

Sanogo is a massive body down low and gives the Huskies incredible size for lacking anyone above 6-foot-9. He has a raw game that will need a lot of improvement in multiple facets but the simplest fact is this – don’t overlook his ability to dominate the paint and earn consistent double-doubles.

Gaffney improved as a sophomore last season but will need to take another step forward as he looks to be the choice to replace James Bouknight in the open spot at guard.

The Huskies will have a lot of options to score the ball, but losing someone who put up as many points as Bouknight did will open up a big chunk of opportunities. Gaffney creates a lot of points both as a scorer and a passer and plays with noticeable poise. However, if he can take that poise and add on the willingness to become a go-to scorer, Gaffney could make the UConn basketball starting five the most complete in the Big East.

The story for the UConn basketball bench is the number of new faces joining the program. Four top-100 recruits will all put forth their pitches to be everyday players on this Huskies roster with one to two open spots.

Tyler Polley figures to be the sixth-man again for Dan Hurley and is the perfect player for that role given his versatility and ability to get hot from deep. After Polley, Andre Jackson is the name UConn basketball fans will be most intrigued to see. If he is able to become more efficient, Jackson is an exciting player with tremendous bounce in transition.

Akok is the final potential piece for the top eight on the Huskies’ depth chart. He’s a big man who had injury problems last season but shined as a freshman in the American Athletic Conference. If Akok is healthy, he takes UConn to a higher level.

The remaining incomers all have the potential to become valuable players in their UConn careers, but we won’t know for sure how much of an impact they’ll all have in year one until we literally see it.

Analytic to Know: Off Eff

UConn basketball was 12th in offensive efficiency last season but the transition period of moving on from James Bouknight raises the question of how the Huskies’ offense will look this season.

In one breath, losing a star in Bouknight could be tough to replace, given players like him don’t come around often. However, given his professional goals, the overall team chemistry could be that much better with all eyes aligning on the collegiate dream of a National Championship.

The Huskies roster is filled with players who can thrive offensively at multiple positions. This could be Dan Hurley’s best overall scoring team yet.

UConn basketball is one of the best brands in college hoops and it seems as if the Huskies are finally trending back to that type of play on the court. These are the highest preseason expectations they’ve had in a while, so especially from a Big East conference standpoint, they’ll be box office to watch this season.

The starting five is one of the most complete in the Big East and UConn basketball will have one of the top frontcourts in the conference if Akok’s health is truly 110% back.

The Huskies got back to the NCAA Tournament last season but this is the year that they should get back to their winning ways in March. UConn hoops are still probably 1-2 years away from being fully back, but don’t be surprised if they string together some big regular-season wins and put everyone on notice in the postseason.