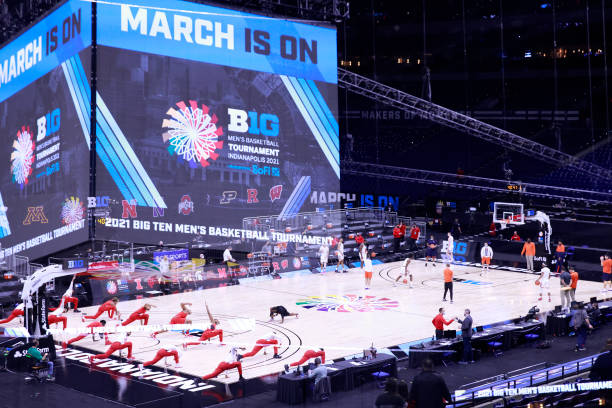 We know which college basketball conferences are the top tier, but each year there’s always a little bit of a shakeup between them.

Look – there’s no denying the college basketball conferences that truly run college basketball. However, within this elite group, there’s still a fight to be at the top of the top. With an influx of transfers, coaching changes and the usual matter of collegiate legends graduating, here’s how the top conferences stack up heading into this year.

Take Gonzaga out of the WCC and you still have three very quality teams in BYU, Loyola Marymount and Saint Mary’s. San Francisco should also be a factor, making it one of the strongest seasons this conference could ever have.

The Zags alone run this conference and are the sheer reason the West Coast is above Conference USA and some other high mid-major leagues. If there’s any year for the WCC to get three teams in, it would be 2022. However, when it gets down to it, it’s still more than likely just a two-bid conference because of the Bulldogs’ domination.

Last season, the Mountain West had four teams with legitimate chances at reaching the NCAA Tournament. Boise State, Colorado State, San Diego State and Utah State all won at least 14 games in conference and with the exception of the Broncos, won at least 20 games outright.

This season, Colorado State and San Diego State have chances to be great yet again. Nevada will also be a much more improved team and the Aggies and Broncos will serve as dark horses to test the rest of the conference. The Mountain West might not have Gonzaga, but they have a better overall core at the top.

The Atlantic 10 has become one of my favorite college basketball conferences in recent years. They’ve continued to send teams to the top 25 throughout each season and have sort of become like the little brother to the Big East.

It’s certainly an advantage having 14 teams compete in one league, but at least half of those will present a challenge to each other and earn valuable wins in the non-conference portions of their schedules.

St. Bonaventure is by far the conference favorite, returning key starters on a team that was a 9-seed last season, losing to LSU in the first round. Watch for the VCU Rams and Richmond Spiders to make a run for an at-large bid.

Despite previous having UConn in the conference, this might be the most hyped season the American Athletic has had in quite some time. It’s the college basketball conference that draws the line between power conferences and mid-majors.

Last year’s rep in the Final Four, Houston, will yet again contend for an at-large bid and will be a top-25 team throughout the season. However, it’s not just the Cougars’ conference anymore. Memphis has one of the top freshmen classes in the entire country and Wichita State brings forth an experienced team ready to make noise.

SMU, Tulsa and UCF will also strengthen the overall conference, perhaps making it a three or even four-bid league depending on how well they perform in November and December.

Villanova is a National Championship favorite and UConn is a top 25 team to start the season. The Wildcats and Huskies are important for the Big East to be one of the best college basketball conferences. If either of them doesn’t live up to expectations, the American could take its place.

Xavier is the third team to keep an eye on. The Musketeers didn’t exactly turn heads last season but practically the entire unit is back and is poised to be a second-weekend team in March.

And like usual, the Big East really doesn’t have any bad teams. Creighton, Providence, Seton Hall and St. John’s are all borderline NCAA Tournament teams to begin the season.

Where the Big East holds strong is the bottom of the conference. I’ve said it before – the worst few teams in the Big East are usually not the worst teams in power conference basketball. It’s just a tough league to win games in.

Now we’re getting cooking. UCLA and Oregon are both Final Four hopefuls, something the Pac 12 hasn’t been able to brag about during the pre-season as of late.

After those two, the competition might fall down. Teams like USC and Oregon State are both really good, but there is a noticeable difference between them, the Bruins and the Ducks.

The Arizona Wildcats could be the team that gives the Pac 12 that extra boost. Coming off a postseason ban and welcoming a new head coach has a lot of people taking naps on the Wildcats’ talent. There’s a lot to like in Tucson – potentially even a top-20 team at some point this season.

I’m a little skeptical about who the top team in the SEC will be. However, Alabama, Arkansas, Auburn, Kentucky, LSU and Tennessee are all inside our top 40 in CBB Rank, the most of any conference to this on this list.

Not every conference needs to have a Final Four contender to be among the top tier, and the SEC will probably see one or two of these teams break through any preseason negativity and assert themselves within the best teams in the country.

Maybe it’s because of the hype around Coach K’s last season and Hubert Davis’ first, but something feels right about the ACC this year. Like usual, Duke and North Carolina have an abundance of young talent that if able to click, will be title contenders by year’s end.

Virginia is a little bit down compared to its recent success but still should be an NCAA Tournament team along with Florida State, Syracuse and Virginia Tech.

The ACC has sometimes disappointed me based on the historic programs and incoming talent that comes in every season. However, ignoring it as a top college basketball conference in the preseason would be naive.

We’ll save the excitement for when their ranks get released but let’s just say both Kansas and Texas are prettyyyy close to the number one spot. It will be a full-out battle between the Jayhawks and Longhorns all season long and with Chris Beard now the head coach of Texas, it brings the excitement up to an even higher notch.

It’d also be foolish to sleep on defending champion Baylor, who has a head coach in Scott Drew that gets it done every year despite not measuring up to the blue bloods in many ways.

With those three teams seemingly on top of the Big 12, there’s also a lot to be said about Oklahoma State, Texas Tech and West Virginia. Over half of the Big 12 conference will reach the NCAA Tournament, which is something not a lot of college basketball conferences can claim.

The Big Ten is starting to run college basketball. They might not have a team in the top two or three to start the season, but Michigan and Purdue are close enough and will headline the deepest conference in America.

Here’s where this conference gets insane. Illinois, Maryland and Ohio State will also pose serious threats for the conference title, and at least two of them will ultimately capture a 5-seed or better.

Most college basketball conferences would thin out here, but the talent in the Big Ten just keeps on going. Indiana, Michigan State, Rutgers and Wisconsin are all serious tournament hopefuls. Northwestern will be improved and it’d be a crime to sleep on Iowa or Penn State. No matter what way you look at it, the Big Ten is set to put forth the best college basketball conference yet again.