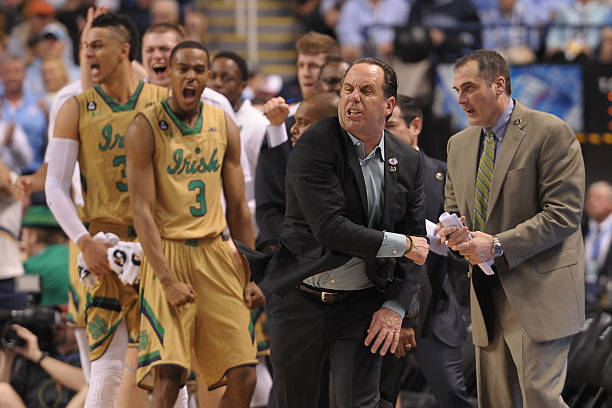 Coming off a disappointing season, Notre Dame basketball has talent and desire to have a rebound season in 2021-22.

Notre Dame basketball was a roller coaster last year with more downs than ups. The Fighting Irish did beat Kentucky, Duke, and Florida State so the roster was not devoid of talent. However, they finished 11-15 (7-10 in the ACC) and were humbled in their final game, a 101-59 smackdown at the hands of North Carolina in the ACC Tournament.

The main culprit for last year’s subpar season was defense. It was the worst of Mike Brey’s tenure with over 200 teams statistically ranked better on the defensive end of the floor than the Irish.

All but two players return, and Brey added former Ivy League Player of the Year Paul Atkinson from Yale and a pair of top-150 recruits who hope to bring Notre Dame to the precipice of an NCAA Tournament berth, something that hasn’t happened in South Bend since March of 2017.

This happened a lot last night. Notre Dame wins in transition when they don’t even have numbers. Duke is just slow to get set.

Easy drive by Nate Laszewski and a great finish. pic.twitter.com/IhV2x4VUY3

Notre Dame will ride the lone non-senior starter in Laszewski. The big man has added muscle over the years in South Bend and can score in a variety of ways – back to the basket, off the dribble, or knock down a big three. When Laszewski plays well, the Irish can compete with the best teams on their schedule.

Paul Atkinson already with a game-high 11 points and a #SCTop10 slam!

This could have just as easily been Dane Goodwin, but the Yale transfer is the lone newcomer to the starting lineup. How he meshes with his new teammates and system will go a long way in reversing last year’s losing record.

Atkinson won’t be intimidated. He was the Ivy League Player of the Year in 2019-2020. He will, however, have to shake off a year of rust as the Ivy League did not play last year. He did average over 17 points per game and is skilled around the basket. He will also have a bevy of shooters on the floor, which will allow him room to operate down low or find on the perimeter to knock down three-pointers.

Trey Wertz started his career at Santa Clara and hit a huge game-winning three-pointer against Wake Forest at the buzzer in the ACC Tournament last season. He did make over 42 percent of his shots from behind the arc.

Robby Carmody was the first true freshman to start at Notre Dame since 2002 back in the 2018-19 season. Injuries have derailed his career (shoulder surgery and torn ACL) but he is on track to begin the season healthy.

A pair of true freshmen in Blake Wesley and JR Konieczny are local products who can really shoot it and will be fighting for playing time early in the season.

The Fighting Irish had their share of efficient points last season, finishing 21st in the category. This season, they could move into the top ten with such a veteran group back.

The versatility off the bench and how Notre Dame plays with such a small lineup also play into this style of play. They should be a fun team to watch based on it.

Notre Dame has nowhere to go but up after a disappointing campaign last season. They sure will be experienced with seven upperclassmen in their main rotation. This will give them time to work the freshman and newcomers into the lineup.

They will need to rely on that experience with a tough non-conference schedule before heading into ACC play. Highlighting their early-season schedule is a trip to the Maui Invitational. They open play against Saint Mary’s on the island. The rest of the field includes Oregon, Houston, Wisconsin, Butler, Texas A&M, and Chaminade.

They will also play Illinois (ACC/Big 10 Challenge), Kentucky, and in-state rival Indiana all before Christmas before embarking on ACC play.

Got the non-conference schedule locked 🔒

Mike Brey will have his team ready to play and the experience and talent offensively, especially shooting the basketball, will allow Notre Dame to improve upon last year’s record. Whether that is good enough to make a run at an NCAA Tournament berth remains to be seen. If the Irish can claim a few wins in the non-conference portion of their schedule and combine that with a top eight finish in the ACC then Notre Dame’s three-year streak of not hearing their name called on Selection Sunday could come to a close.

Projected Finish: 6th in the ACC