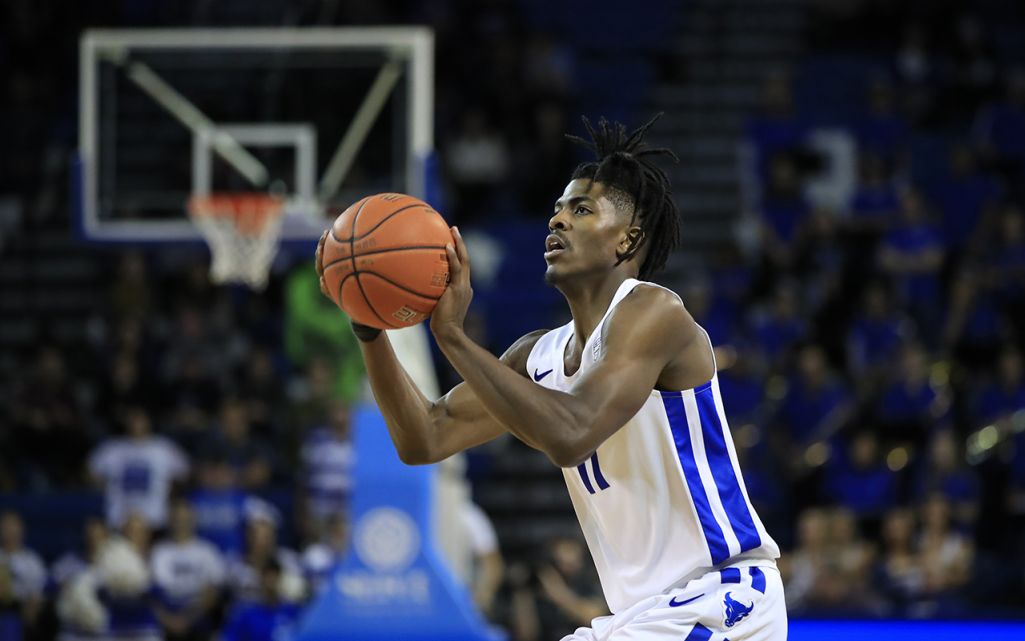 Buffalo basketball has a veteran group of scoring machines as the Bulls have a clear NCAA Tournament team on paper.

Buffalo basketball posts one of the top starting fives in college basketball, with three All-MAC talents spread between the backcourt and frontcourt. This veteran group looks to head back to the NCAA Tournament after a two-year hiatus.

You can’t talk Buffalo basketball without mentioning Jeenathan Williams, Josh Mballa, or Ronaldo Segu. All three go hand-in-hand, but Williams is where all the action starts.

The undersized yet talented small forward is a statistical nightmare. Williams can stroke it from deep, uses his body to finish in the lane, gets teammates involved, rebounds like a big man, and still has enough left in the tank to defend.

Williams could easily be a 20-25 ppg scorer but shares the floor with two other very gifted offensive players. However, Williams is still the go-to player for the Bulls. He ended last season scoring 20 points or more in four of his last five games, with the majority being postseason basketball. Look for that type of production to be even more present in Williams this season.

I don’t think anyone in Buffalo knows what they’re going to get in George Washington transfer Maceo Jack. In 2019 and 2020, Jack was a key piece for the Colonials. He averaged roughly 11 ppg in both seasons but was moved to the bench for his senior season as the struggling GW program looked to build on its’ young roster.

Jack decided to transfer in late December and will come back home to the place he’s from in Buffalo, New York. The Bulls are a more experienced team and are in need of a guard to replace Jayvon Graves. If Jack can play like he did when used as a starter at George Washington, he could have another season of double-digits in points.

However, it might not be that simple. Jack will certainly play fourth-fiddle in the scoring department and will have to find his role within the team. Buffalo basketball is known for hoisting threes and running a high-tempo offense, so Jack should be able to find his footing within that style of play. I’m being cautiously optimistic about Jack’s outlook right now, but don’t be surprised if he totally outperforms it.

The bench is the one part of Buffalo basketball I’m not sure I like. Part of it is due to the veteran group in the starting five, not leaving a lot of minutes for anyone to reach their potential in the second unit.

Laquill Hardnett and Keishawn Brewton are expected to be two guys who do receive solid minutes off the bench. Hardnett will look to give good backup minutes to Mballa with Brewton in the running to switch on and off with Jack as the starting shooting guard.

David Skogman is a wild card, having only played in 15 games at just over eight minutes per contest last season. The second-year big man could be a nice backup to Brock Bertram, giving the Bulls depth at the position where they really need it to let Mballa play at his natural position.

Fagan and Perry should both be good glue guys within the rotation, but don’t count them out from being higher up in the depth chart. Right now, the Bulls bench seems very open to competition as far as who receives the most minutes, and it could be interchangeable throughout the season. It might seem complex, but Buffalo likes to run and gun, so it’s really about who’s playing well and not out of breath on each given gameday.

NPAR, or near proximity field goal attempts per 100 trips up the court, is how you have to measure Buffalo basketball. The Bulls ranked first in that category (39.77) amongst all college basketball teams last season. Defensive pressure, a force inside in Mballa, and acrobatic players in the backcourt are all reasons for why the Bulls took more layups, dunks and tip-ins than any team in college hoops in 2021.

Surprisingly, the percentage of those shots falling was actually in the bottom half of all teams, at 57.91%. However, just the fact that they are able to get inside that easily is a struggle for most defenses. It’s a simple reason why the Bulls were T-8th in point per game last year.

In other metrics, Buffalo was first in PPSC (22.48), another metric that deals with inside shooting based on second-chance points. Buffalo basketball thrives in the paint.

In 2018 and 2019, Nate Oats led Buffalo to two straight NCAA tournaments, with the Bulls winning one game in each. The first year saw the Bulls upset DeAndre Ayton and Arizona. In 2019 the Bulls earn a 6-seed, finishing 32-4. The past two seasons, Jim Whitesell has continued the new winning tradition in the program but has yet to make an NCAA Tournament. That will change this year.

When the Buffalo Bulls SHOCK the basketball world and blow out Arizona. pic.twitter.com/WoMLw7qBj4

The MAC provides a decent challenge, but this Buffalo team is so clearly the favorite, it could be another 30-win team. The starting five could legitimately compete in the ACC or Big East, and vie for a 20-win season in those conferences.

Ronaldo Segu and Maceo Jack will be one of the toughest backcourts to defend in the MAC. Williams is a backcourt/frontcourt combo and thrives in both roles. Mballa was one of the most dominant players in the MAC last season, and won’t be backing down any time soon. Bertram rounds it off nicely, knowing his role and leading breaks on rebounds off missed shots.

The Bulls’ non-conference schedule isn’t completely released, but we do know they have an away game at Michigan, home games against Rider, Stephen F. Austin, and either Saint Louis or Illinois State, and an away game against in-state rival St. Bonaventure. Games against Canisius and UC-Irvine round it out for the moment. That’s a compelling schedule already and provides three to four really tough games to get a good glimpse of what Buffalo is really made of.

The scoring capabilities put the Bulls in the driver seat of nearly every game they play in. This should lead them to the NCAA Tournament where I see a round one win as a pretty good bet. After that, it’ll be up to the defense and efficiency to carry Buffalo basketball further, but either way, this is a winning ball club.