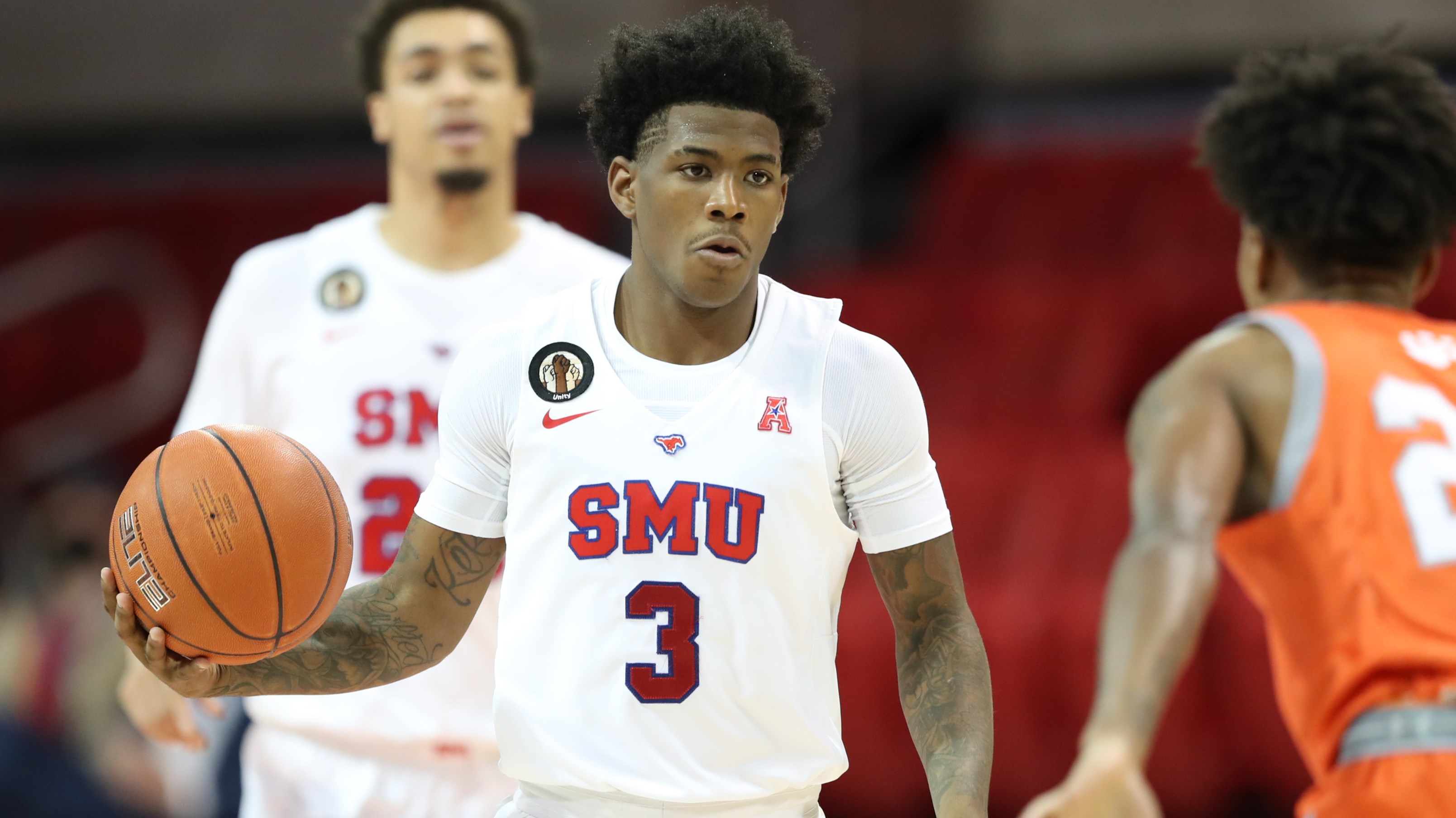 SMU basketball was hit hard by the transfer portal and now hopes young talent and remaining players bounce back.

SMU Basketball lost a majority of its starting minutes to the transfer portal and a pro career. Feron Hunt pursued the NBA and played in the Summer League for the Dallas Mavericks. Coach Tim Jankovich had two players move up in conference in Yor Anei going to the Big East with Depaul and Ethan Chargois going to Oklahoma. Tyson Jolly took a step down to play under Rick Pitino at Iona, Charles Smith to Old Dominion, William Douglas to Prairie View A&M, Darius McNeil to UTSA, and Everett Ray is still available in the transfer portal.

With all these losses come additions and Jankovich landed a huge transfer in Zach Nutall from Sam Houston State. The Mustangs also bring in a couple of solid transfers and brought in three 3-star guards and a 4-star forward in their recruiting class. Coach Jankovich always seems to put together some high-power shooters, and this team will likely be the same mold. SMU basketball will hope for the remaining players to become leaders and help progress the incoming players.

A huge offseason addition for @SMUBasketball in Zach Nutall:

🔊on to hear why! pic.twitter.com/WX4T1WDHDV

COLD BLOODED! 🧊@stef_todorovic7 hits the go ahead three in the dying seconds to give @KSSrbije 🇷🇸 the win over Latvia 🇱🇻!#FIBAU19 pic.twitter.com/YkK8K9b8xY

After testing the NBA waters, Kendric Davis chose to stay with SMU Basketball. The world could hear the huge sigh of relief from Mustang Country and Coach Jankovich as Davis’ talent would have likely gotten him a professional contract this year. While undersized, Davis has continued to excel and will likely lead the American Athletic Conference and SMU basketball in points again. He was also the assist leader. The offense of the Mustangs truly goes through Davis as the next closest player in assists per game was Alex Lomax from Memphis at 4.4 compared to Davis’s 7.4.

Looking at the new team surrounding Davis, he will still be the scoring leader in the AAC but has a lot more talent around him. He will be able to distribute the ball more and likely get an even better-shooting percentage as he has the better shot selection and the uncertainty from the defenses. SMU Basketball will provide better lanes and could easily see Davis above 50% from the field on average and should be above 36% from the 3-point range. While Davis seeks a pro-career, he will need to get better defensively and increase his 3-point shooting percentage. He will need a lot of help from his teammates to help his profile.

Run it back 1 lat time 🎲and bet the house on it 🔥 pic.twitter.com/naptKnUqtn

A long tale of Tristan Clark as he came in as quite the star for Baylor basketball in 2017, quickly becoming the team’s sixth man. He earned a starting spot in his sophomore season, but a knee injury sidelined him for most of the season. Then his Junior year, he came back but still didn’t feel right with his knee. He continued to do rehab and sat out during last year.  Doing what was best for him, he continued to rehab and hopes to show out this year. As one of the more experienced players coming off the bench, SMU basketball will likely start Clark.

SMU Basketball and Coach Jankovich will be putting Clark in to replace Feron Hunt.  Tristan Clark has proven to be a huge asset, and if he can see his potential, playing for the Mustangs could catapult him into the NBA. He has the natural ability and has proven he has the talent. If he can stay healthy, he has all the right tools to be a huge asset. He has the ability to shoot from distance, and utilizing this could also be huge. Many of the big men in the AAC will struggle to guard the big men that can shoot 3-pointers.

This team is full of talent that some players that have started elsewhere will be fighting for minutes on this SMU Basketball team. Coach Jankovich will likely be rotating players often around the guards while maintaining the Davis and Clark. The first guard likely coming off the bench is Michael Weathers, who has played in different conferences trying to find his spot. He will likely be the one to spell Davis and Bandoumel. The Mustangs will utilize Zach Nutell’s ability to fire away and be another offensive weapon to take pressure off Davis with scoring prowess from Sam Houston State.

When Jasey and Clark need to take a break, Agunanne will come in, followed by a very impressive freshman in Todorovic. It takes going to the ninth player to come in to be a freshman without playing experience potentially. The talent and experience on this SMU basketball team is something that many people want, and in any lesser league would put this team as a leader. The next player I expect to come off the bench is Zhuric Phelps because I think he will learn so much from Davis and is slotted to be the next Davis. He is bigger, but his skill set is very similar.

The Mustangs are likely fighting for the third or fourth spot in AAC. With Memphis and Houston sitting firmly at the top, Wichita State, UCF, USF, Tulsa, and SMU will be fighting for the third spot. As the resident AAC writer, this conference will be very tough, and SMU is one of the teams that is often slept on. SMU basketball is tough to beat at home and always has some shooters that can cause big swings in the offense. It will be a terrifying team if Coach Jankovich can make this team meld and have these shooters firing on all cylinders. The Mustangs aren’t the lengthiest but have the ability to bring it similar to Memphis and Houston defensively.

SMU basketball has many new faces and will need to gel, but the upside is there. This team should make it into the NCAA but will likely be in a play-in game. SMU has some great non-conference games that will help build the resume. The Mustangs get to play Oregon and are the Jacksonville Invitational, play against Missouri, and then have a shot at Florida State or Loyola Marymount. These are some great matchups, but it gets better as the team gets UNLV, Vanderbilt, Dayton, New Mexico, and Evansville. SMU basketball hits many different conferences and good teams in their respective conferences to set itself up very well for this season.

Last season SMU ranked 47th in KenPom in adjusted offense. Imagine how much better their offense will get by the additions of Clark, the Weathers brothers, and Nutall. There’s no telling how many points the Mustangs’ offense will be able to put up this season.

On defense, SMU was still a top-100 team. Clark in particular should create fastbreak opportunities with his experience at Baylor and ability to block shots. Considering the offensive talent SMU has, you could expect one of the fastest playing and highest-scoring teams in the country.