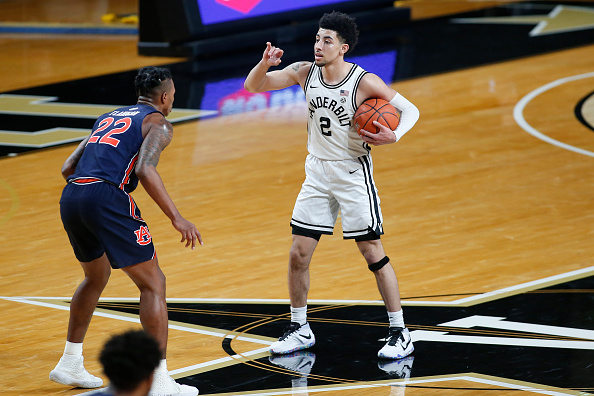 The return of Scotty Pippen Jr. gives Vanderbilt basketball hopes of making its first tournament since 2017.

Coach Jerry Stackhouse, who may be on the hottest seat in all of college basketball, let out a sigh of relief that could be heard all across America when Scotty Pippen Jr. announced he would return for his junior season. This team is coming off an abysmal season, but the hope is there that Vanderbilt basketball can turn it around and become a competitive team in an SEC conference that can prove to be difficult.

Not only is Scotty the team MVP for Vanderbilt basketball, but he could easily be the SEC MVP as well. If everything works out, he can even be the MVP of college basketball. Pippen Jr. took a big step forward last season, showing his versatility in scoring from all three levels and getting to the foul line. No matter who they played, Pippen Jr. would bring his A-game, and with a better team around him, his play may turn into wins.

On the defensive end, Pippen can get it done too, averaging nearly two steals per game and constantly getting in the passing lanes. Scotty knows that this season is a great way to improve his draft stock, and with the keys to the team and the skills to do so, he will be an incredible player for Vanderbilt basketball.

Robbins had been extremely solid in his time at Minnesota, being the focal point with Marcus Carr in big upsets, and shutting down some of the top centers in the country. This year, he’ll have to continue that role, but take it to the next step. There is a big dropoff for Vanderbilt after Pippen Jr., so if Robbins can turn into a better overall player and stay healthy, then this could provide Vanderbilt with a second option. If he stays in that same role he had at Minnesota, we may see a copy and paste of last season, where the Gophers didn’t have enough to get it done.

Vanderbilt lost a lot of players to the transfer portal and had to focus more on replacing their starters rather than their bench. They don’t have a guy who can really be a spark off the bench, and no one really serves a specific role where they can help the team if they’re in a slump. One guy to watch is Shane Dezonie, a shooting guard who just made the top 100 recruit cut. He has the potential to become a nice option off the bench, and Stackhouse should give him opportunities with no clear-cut guys ahead of him.

Putting Vanderbilt this high on the CBB Rank may come back to bite us, considering they probably lost more than they gained after a 9-16 season. With that being said, another year of development for Pippen, and an underrated weapon in Jordan Wright could lead to success for Vanderbilt basketball. Pair that with Liam Robbins’ ability to control a top center in any game and Vanderbilt could catch a lot of people by surprise.

The SEC looks to be solid this year, with Alabama and Arkansas slowly becoming annual threats, and Kentucky being one every year but the last. Other teams like South Carolina (CBB Rank #83), Florida, LSU, Tennessee, and Auburn won’t make it easy either, so Vanderbilt basketball will have a large hill to climb in order to make it to the NCAA Tournament.

Last season, Vanderbilt basketball finished 136th in KenPom defensive efficiency. For context, 2-22 Iowa State and 5-21 Washington finished in the two spots ahead of them. Defense is obviously important to a team’s success, so if they can’t get the number up, then they should kiss this season goodbye. Pippen Jr. and Robbins are good defensive anchors, so it will be up to the rest of the team to help out and boost that rating.