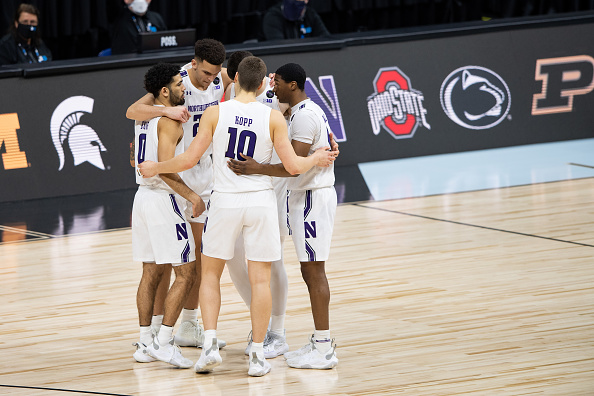 After starting surprisingly hot last year, Northwestern basketball cooled down and finished with a disappointing record. This year, they bring back four of their five starters, including their top scorer Chase Audige as they look to earn respect in the Big Ten and make a tournament appearance.

Audige took a big jump last year, leading the team in scoring and coming up with big-time performances against some of the Big Ten’s finest, like 25 points against Ohio State and 22 against Illinois. With another season under his belt, Audige should be the guy for Northwestern basketball once again, and if he can get his scoring total up to 15 points or more, he can sneak his way onto an All-Conference team.

Not only does he have one of the better names in college basketball, he is also a huge key to success for this Northwestern basketball team. Last year, he put up several masterful performances to help pull off upsets, like 30 points against then #4 Michigan State and 25 points on the road against Minnesota. With those games came several nonexistent performances in important games, like 0 points against Illinois and 2 against Michigan in back-to-back games.

If Buie can be more consistent, then Northwestern’s backcourt could be a problem. Buie has great scoring ability and can spark a needed run when he is hot. If he is not able to develop this consistency, Northwestern may find themselves in the same situation as last year and Coach Collins may eye backup point guard Ty Berry to handle that role.

Northwestern will see a much different bench than last year, with two freshmen most likely getting minutes and transfer Elyjah Williams seeing the court as well. One returning player will be on the bench, and that’s Ty Berry. Berry showed impressive flashes last year, making Northwestern basketball fans optimistic they have a hidden gem. He could be a really great option off the bench if Northwestern wants to go small.

7-footer Matthew Nicholson and senior guard Ryan Greer could also see some time, but as far as the main rotation goes, it’s too early to know how much of an impact they’ll make.

Northwestern basketball returns four of five starters from last season, but lose a big one in Miller Kopp to conference rival Indiana. This team should be really deep at guard, with Buie, Berry, Audige, and Casey Simmons, who is the second-highest Northwestern recruit in history all expected to share minutes.

The biggest question mark is the forward positions. Northwestern basketball lost both small forwards from last season and will have to decide if they want to go big and start Beran there, go with a worse player but someone who fits in Williams, or go super small and move Audige there while adding Berry to the starting lineup. Either way, Beran and Young will both playing useful time as forwards.

The Big Ten will once again be difficult, with Michigan, Purdue being top ten teams, and others like Rutgers, Maryland, Ohio State, Michigan State, and Illinois being not far behind. They will need to use their experience to their advantage and hope for consistency to make the tournament and compete in one of the best college basketball conferences.

Ceiling: Round of 64 Exit