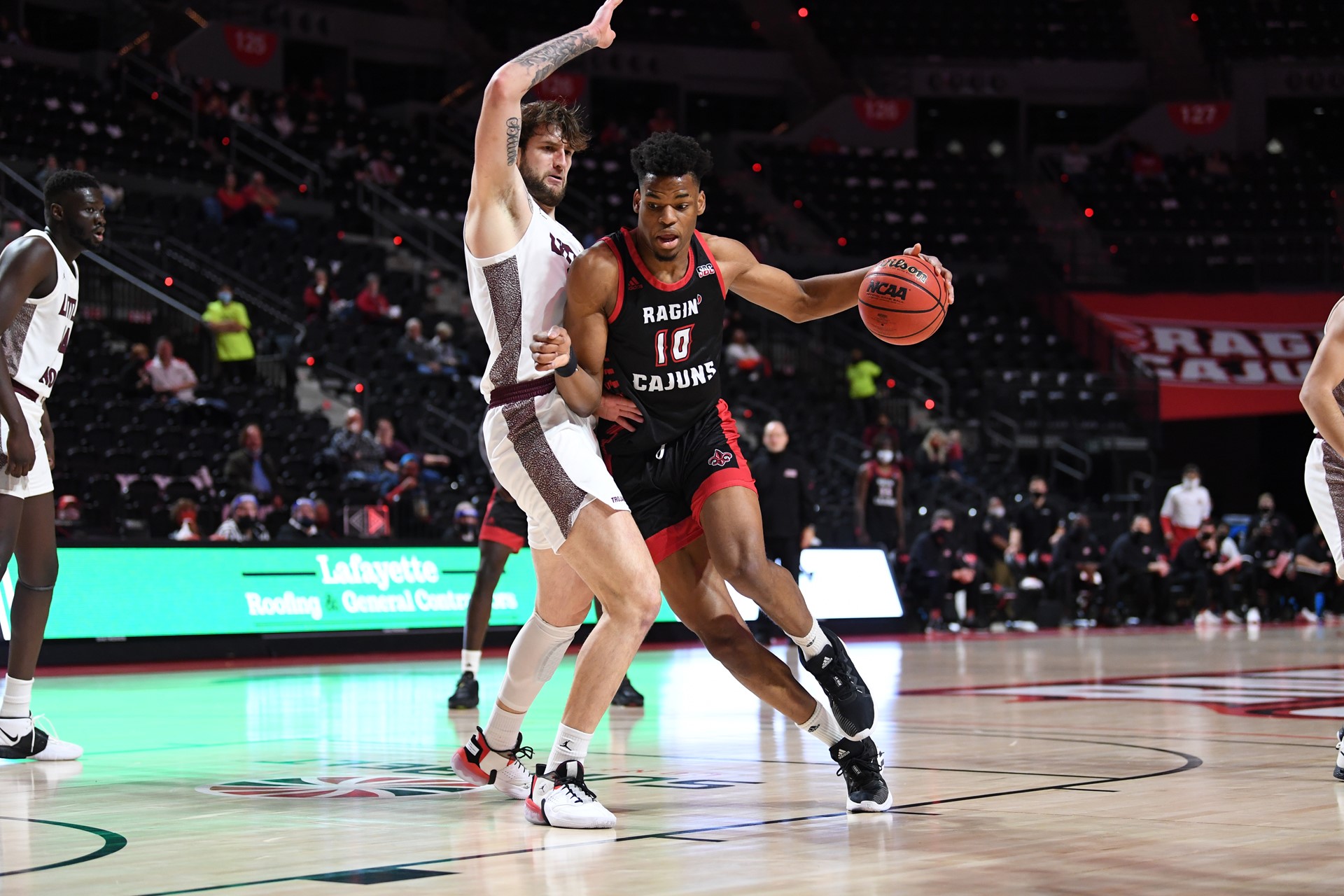 A monster frontcourt looks to lead Louisiana basketball to an eighth winning season in ten tries.

A 17-9 (10-7 Sun Belt) Louisiana basketball team lost its top two scorers from last season. However, having a veteran head coach, a major impact transfer in Greg Williams Jr., and an impactful frontcourt, once again puts Louisiana right at the top of the conference they’ve often been contenders in.

Nearly long gone is the age of traditional big men carrying a basketball team, but that’s what Louisiana basketball is shaping up to be this season. Akwuba leads a trio of three frontcourt assets for the Ragin’ Cajuns, all of whom already have plenty of experience as starters in college.

Akwuba started as a freshman at Portland but was then moved to the bench for his sophomore season. He transferred to Louisiana where last year Akwuba was named the 2020-21 Sun Belt Defensive Player of the Year.

Akwuba is notorious as a shot-blocker (13th overall in bpg last season), but don’t overlook his offensive game. He nearly averaged a double-double, coming up just short by 0.7 rebounds per game. Expect his scoring to expand even more, as Akwuba is one of the most dominating players in the Sun Belt.

Louisiana has plenty of scoring in the starting lineup and the likenesses of Ty Harper, Isaiah Richards and Jalen Dalcourt make for a solid bench. However, if Kobe Julien can pick up where he left off last season, everything would fall in place.

It’ll be Julien’s fourth year in the program, although he’s still listed as a freshman. Here’s how he got to that point:

When he has been on the court, Julien’s shown why he can be a major piece on Louisiana. Unfortunately, it’s to the point where inserting him into any major role could disrupt the lineup mid-season. I’m sure head coach Bob Marlin will keep things under control, but it is a very unique situation.

All that aside, Louisiana can certainly have a successful season with a limited Julien. However, if he were to be relatively healthy, it would take the Ragin’ Cajuns to the next level. He has the talent to be a starter, but the injury concern will likely keep Julien on the bench. A guy of his caliber off the bench will only spell trouble for the rest of the Sun Belt.

I’m taking all things into consideration here, so Julien’s injury concerns probably keep me from giving Louisiana basketball an 8 out of 10. However, there’s still a lot to like here, so call me harsh if you’d like.

Two major bench pieces are Ty Harper and Isaiah Richards. Harper will share point guard duties with Bryan Au and filled in quite nicely as a starter last season, going off for season-highs of 19 points, 7 rebounds, and 2 steals in separate games.

Richards was the primary backup center to Akwuba and given the depth the Ragin’ Cajuns already have in the frontcourt, he’ll tie it all together. Even if one man goes down, Richards wouldn’t be a major step down.

Jalen Dalcourt, Antwann Jones and Trajan Wesley will all be in the running for minutes. I didn’t even list Kentrell Garnett or Michael Thomas, but they both received minor playing time last season and could be options as well. Needless to say, the impact of Julien is huge, but there are still enough role players to make for a really good bench.

I went almost all this way without mentioning Greg Williams Jr. That shows how many pieces Bob Marlin has.

Williams Jr. comes from St. John’s and will likely be the leading scorer on this team. Akwuba might be the dominating factor, but Williams Jr. was already a near 10 ppg scorer at St. John’s. He should thrive in the Sun Belt.

Having Williams Jr. helps out the Louisiana basketball backcourt given Au’s reluctance to score the ball. But Au’s style of play might just be perfect, as the entire starting frontcourt for Louisiana basketball is gifted at scoring. Harper’s bench play can offset Au’s, because he’ll look for his shot more.

As always, there will be competition in the Sun Belt. It might not be a college basketball powerhouse conference, but there are always a few teams to keep in mind. Louisiana’s still the projected team in the field at the moment, but they’ll surely get a good run for their money from Georgia State. The Panthers didn’t make our top-100 but ended last season strong.