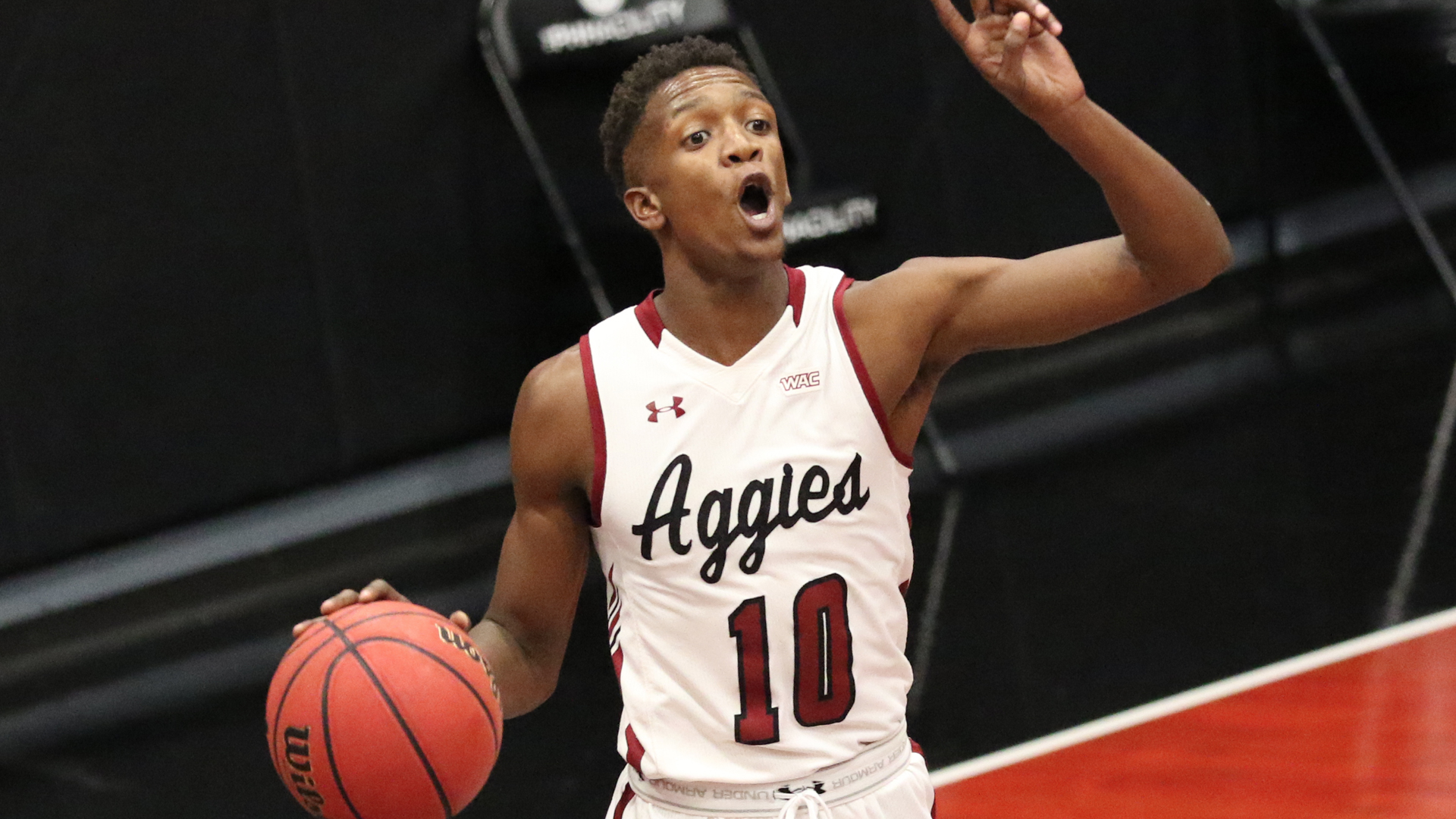 New Mexico State basketball landed one of the most sought-after transfers of the offseason in Teddy Allen. The Aggies didn’t stop there, adding on six additional transfers with plenty of experience. Head coach Chris Jans will look to mold them together with a few key returning pieces.

If a power-six team added Teddy Allen, they’d immediately become better. New Mexico State has had some good teams in recent years, but Allen could wind up being one of their best players over the past decade or more. That list includes the likes of Wendell McKines, Pascal Siakam, and Zach Lofton.

I went light on his projected statistics, but only because of how deep this roster is. If Jans wants to utilize all of his weapons, Allen could back off a bit. But if he’s in full gear, he could easily average something more like 21 ppg, 7 rpg, and 4 apg.

The reasoning for this is simple. Allen already has a proven track record as a bucket getter in the Big Ten. The move to the WAC will mean easier buckets and at 6-6 and 223 pounds I can’t think of many guys who will be able to defend him.

You almost have to feel for Clayton Henry. He came in and started 25 games as a freshman. An injury derailed Henry’s sophomore season, but he came back as a full-time starter last season. Unfortunately, he’ll likely have to move to a new role as the 6th man.

There is a lineup that would keep Henry in the starting lineup, but it would involve Pryor coming off the bench and Rice starting at point guard. However, it makes little sense to turn Rice, a fourth-year guy, into a point guard. Pryor’s experience at Washington is also too much to cast him off to the bench.

So for Henry, it will be about accepting what looks like a bench role. Winning comes at costs and I’ve got to think he’ll be on board with whatever helps out the team. No matter what the case, it’s still a bit of an ego-hit. Henry will get a lot of looks off the bench though. It’ll be an adjustment, but he has what it takes.

Obviously having Clayton Henry as a 6th man already makes this a top-notch bench. Whenever you almost HAVE to move a starter to the bench, it’s normally a good sign of depth.

The talent on this bench doesn’t quite drop off either. Mike Peake is a forward who can also get into double-figures. He’ll likely earn at least 15 to 20 minutes.

Here’s where it gets interesting. Low-division guards Mario McKinney Jr. and Marseilles Caston will both vie for some type of minutes off the bench. Henry can’t be the only guard and they both have point guard skills.

Peake will have help as well. 6-foot-11 transfer Yuat Alok is too much of a presence to ignore. He was a starter at Coppin State, so earning some type of minutes shouldn’t be an issue. Jermaine Harris is another forward who was a two-year starter at URI, before having a bench role last season. He’s a great glue guy who again, is just too talented to not earn any rotation minutes.

I could go on and on about New Mexico State basketball’s bench. I’m not crazy when I say this – it’s under consideration for the best bench in the country.

The Aggies are the clear favorites in the WAC and might even be one of the best college basketball teams on the entire west coast. Matty Brackets listed New Mexico State basketball as a projected 14-seed, but if they run through the WAC as expected and pick up a few big non-conference wins, they could easily be as high as an 11 or 12 seed.

New Mexico State basketball will be led by transfers, but don’t be surprised if they gel quickly. Henry, McCants, Rice, and Tillman are all experienced players in the program and will be called upon to speed up the process. Teddy Allen will make it even easier because he will be the clear number one option and there won’t be any debate.

Overall, Chris Jans has got to like his roster. He’s got an almost perfect blend of tough big men, scoring guards, a pass-first point guard in Nate Pryor, and a star in Teddy Allen. The recent addition of Mike Peake strengthens the bench even more and bringing in two non-Division I players has intrigue written all over it. Did I mention he also has a talented 6-11 big man off the bench too? New Mexico State basketball will be a threat to whoever plays them.