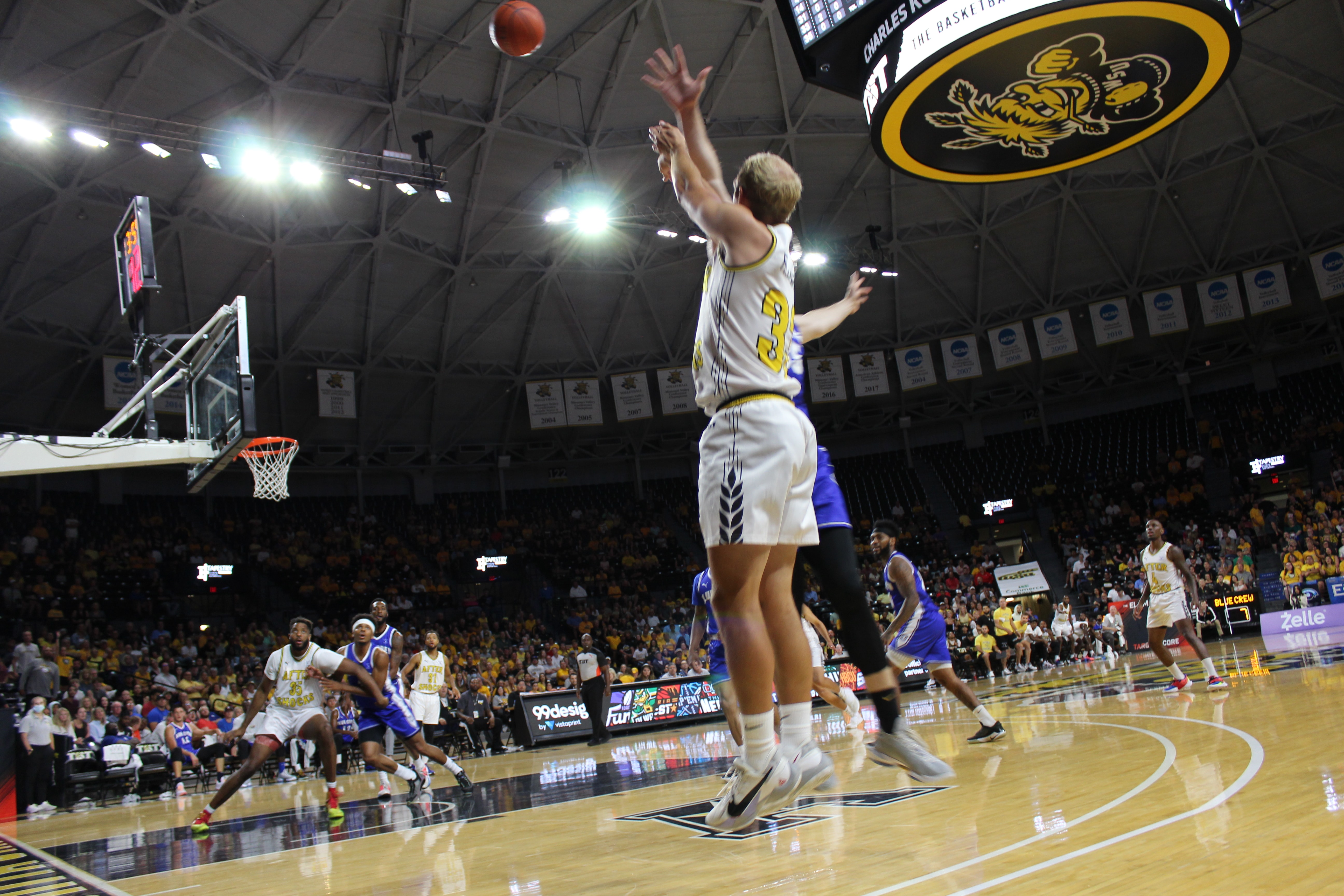 Day 3 of The Basketball Tournament saw arguably the best finish so far this summer.

Challenge ALS advanced in The Basketball Tournament defeating Team Arkansas 69-63. Challenge ALS will play Tuesday at 8 p.m. on ESPN 3 for the opportunity to advance to the Quarterfinals. Marvelle Harris led Challenge ALS with 25 points, 3 rebounds, 2 assists, and 1 steal. He had some help from Jordan Faison, who added 14 points and 4 rebounds. Deshawn Stephens (11 points) and Justin Dentmon (10 points) scored double-digits to help advance Challenge ALS.

DUSTY HANNAHS IS A ONE MAN FAST BREAK FOR @TeamArkansasTBT 💨

He’s got 8 points so far in Q2 pic.twitter.com/ROdAno5v7e

Team Arkansas was led in scoring by Dusty Hannahs. Hannahs put up 22 points and 1 rebound. Jaylen Barford helped out with 14 points, 6 rebounds, 3 assists, and 1 steal. However, it wasn’t enough to keep this team in The Basketball Tournament.

A steal and SLAM for Jaylen Barford 🛩@TeamArkansasTBT

Game tied at 23 on ESPN3 pic.twitter.com/ORwtqqA0RC

The Elam Ending came into effect with Team Challenge ALS leading 61-60 over Team Arkansas putting the end score in The Basketball Tournament for this game at 69 points. Starting with the ball out of the time out, ALS struck first with a lay-in by Marvelle Harris. ALS caused a shot clock violation after a timeout taken by Team Arkansas couldn’t even get the ball to touch the rim on two shots. A scuffle on the floor ended with Justin Dentmon getting fouled in the act of shooting. Dentmon made the first but missed the second free-throw. A foul called on the offense put Team ALS Deshawn Stevens at the line for a free-throw and the possession.

Stevens made his free throw, and Marvelle Harris came down the court and pulled up to put team ALS up 67-60. After a turnover by Team Arkansas, team ALS couldn’t get control and the ball was stolen back by Team Arkansas. Dusty Hannahs drove the ball, made the shot, and got fouled. He made his free-throw, but a shooting foul on the other end put Dentmon back on the line. Another foul put Harris on the line and sealed the win on his made free throw.

The AfterShocks advance to the Regional Final and will play on Tuesday at 6 CST in The Basketball Tournament. The final score over the Omaha Blue Crew was 76-73. Conner Frankamp led the charge with 24 points, 5 assists and 1 rebound. Rashard Kelly added 13 points, 11 rebounds, 4 assists, and 2 steals. The last double-digit scorer for the AfterShocks was Markis McDuffie, who had 12 points, 6 rebounds, 1 assist, and 2 steals.

Admon Gilder is playing OUT OF HIS MIND for the @OmahaBlueCrew

He has 21 points in the 3Q on ESPN 🎯 pic.twitter.com/yf6sFmjywP

For the Omaha Blue Crew, Admon Gilder led both teams in scoring, putting up 27 points, 7 rebounds, and 1 block. Greg Smith was another huge issue for the AfterShocks as he put up 13 points, 3 rebounds, and had a steal. Finally, the big man Nick McGlynn added 11 points and 5 rebounds. Even with all this, the defense and Shocker spirit was put forth in this game by the crowd and all the players for the AfterShocks in The Basketball Tournament matchup.

Elam Ending time for the Omaha Blue Crew, leading 67-63 puts the final score for this game at 75 points. The Aftershocks needed to make stops and shots to continue to compete in The Basketball Tournament. With possession after the time out, Conner Frankamp immediately hit a three-pointer. A foul put Admon Gilder at the line, where he sunk both his free throws putting the Blue Crew up 69-66. Another big three by Frankamp tied it at 69.

A big missed call caused a rush of emotion from fans and players, and a technical foul was assessed to Markis McDuffie, putting Gilder at the line for the Omaha Blue Crew. A putback Greg Smith had the Blue Crew within two points of winning. Conner Frankamp answered with a two of his own, with the score at 73-71.

A foul on Deverell Biggs put Frankamp at the line, where he made the first but missed the second. A steal and a big breakaway put Markis McDuffie at the foul line, where he made both after a missed dunk. The Charles Koch Arena crowd was all in, and the AfterShocks put on the defense for a jump ball call. These former Shockers led 74-73 with possession arrow in their favor. Clevin Hannah mishandled the ball out of bounds and gave the Omaha Blue Crew the possession only two points away from the win. A massive steal by McDuffie with a pass off to Frankamp for the lay-in caused the win on an inbound pass from the Omaha Blue Crew. AfterShocks win, 76-73.

The Cheaters were led by Terrance Jones’ 22 points, 7 rebounds, 4 assists, and 1 steal. Casper Ware Jr.’s 21 points, 2 rebounds, and 2 assists followed closely. Finally, the last double-digit scorer for the LA Cheaters was Sedrick Barefield, who had 14 points and 2 rebounds.

This Florida TNT squad is applying serious pressure to the loaded L.A. Cheaters! 👀

They’re leading by 11 right now at the end of the 3Q @FloridaTnt pic.twitter.com/fs4qFJL2WZ

Elam Ending went into effect with Florida TNT being up 82-73 over the LA Cheaters. Derrick Williams started by hitting a wide-open 3-pointer, then a nice drive to the basket by Jones got the LA Cheaters within four. A foul on Mychel Thompson put Dominique Jones on the line where he made one free throw. Williams was fouled on a layup and then made the free throw. Chris Warren pulled up for two for Florida TNT putting the score at 85-81. Jones fouled a shooting Marc-Eddy Norelia to put him at the line where he made both of his free throws.

Kenny Boynton drills a 30-footer to send @FloridaTnt to the third round! pic.twitter.com/nBfSTPKnYX

Derrick Williams then fouled Jones on the drive. He made both free throws putting Florida TNT a score away from advancing. Ware Jr. drove in for a layup and cut the lead. Then Jones comes back, threw a pass of the backboard to himself, and put it in, with the Cheaters now down just four.. Florida TNT won on a 3-pointer by Kenny Boynton. The final score was 92-85 for this The Basketball Tournament matchup.

The Stillwater Stars looked tired from the impressive comeback just the night before. They could not come back and won’t be moving forward in The Basketball Tournament. They were led by Michael Qualls’ 20 points, 7 rebounds, 1 assist and 1 block. He had help from Markel Brown’s 11 points, 3 rebounds, and 1 assist. Jeffrey Carroll was the only other double-digit scorer for the Stars with 11 points, 1 assist and 2 steals.

Elam Ending happened in this game, but I wish it could have happened sooner in an unfortunate mismatch. Eberlein Drive led 111-58 to make the final score 119 in The Basketball Tournament matchup with Stillwater Stars. Cowherd fouled Guerrero, who sunk both his free throws. A driving layup by Archie Goodwin followed up by a dunk on the other end by Markel Brown.

Brown came back down to sink a 3-pointer, answered quickly by A.J Slaughter’s 3-pointer. This put the score at 116-65. Brandon Averette dove to the basket and iwas fouled for an and-one. He missed his free throw, and a good look by Trevelin Queen hit an open 3-pointer to end the game 119-67.