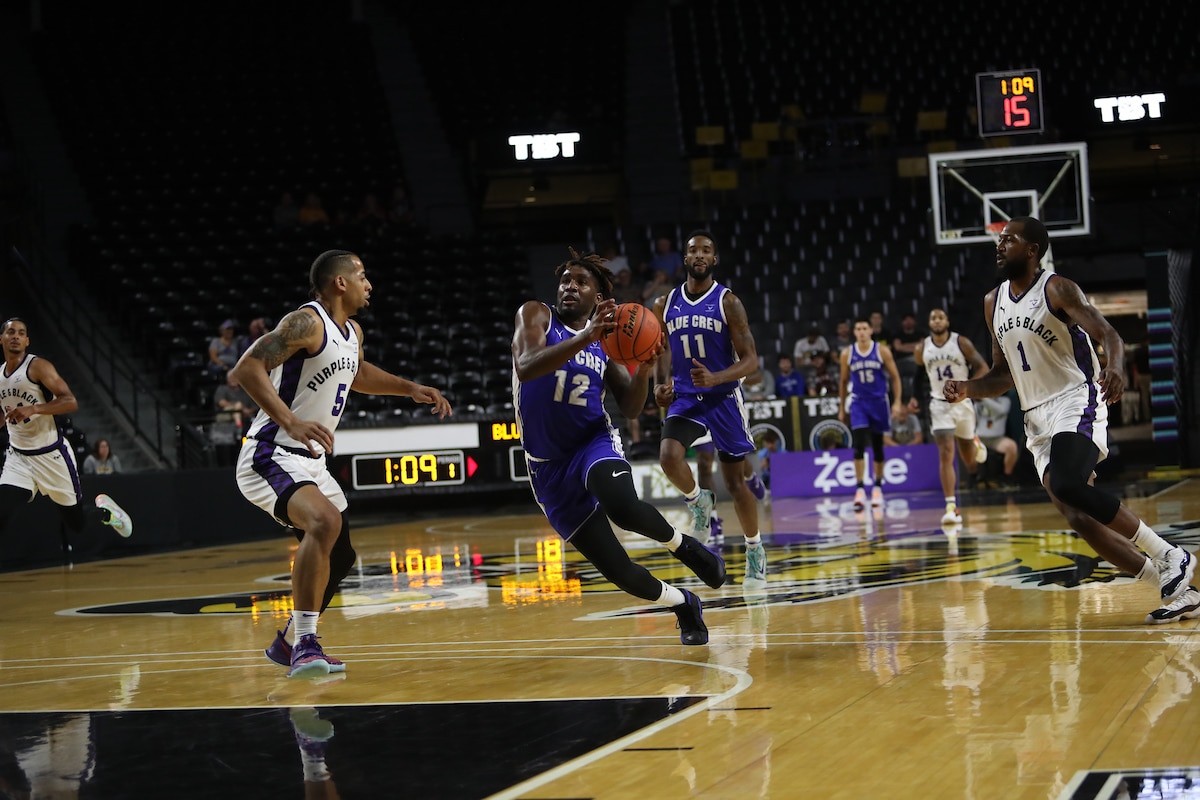 The Basketball Tournament kicked off in Wichita and did not disappoint.

This is year 8 of The Basketball Tournament. This is a record-setting year as TBT welcomes 28 alumni teams. There are 64 teams all fighting for the chance to win the $1 million grand prize.

These games are slightly different from college and professional games. The rules are a little different and include four nine-minute quarters and six fouls before a player has fouled out. The ball also becomes live once it is off the rim, and of course, the Elam ending.

The Elam Ending is a different way of finishing the game after the first dead ball in under four minutes of the final quarter. Eight points are added to the winning team’s score. Whichever team gets to that score first wins. With the Elam ending, the clock is shut off and prevents the slowing of the game by eliminating fouling.

CJ JONES’ DAGGER 3PT SENDS @TeamArkansasTBT TO THE NEXT ROUND! 🔥🔥🔥🔥🔥🔥 pic.twitter.com/4p9lnwIr8p

Team Arkansas was the first to score and quickly had a solid lead of seven points by the end of the first quarter. They built this lead to 10 points at the half, 40-30. However, Fort Worth Funk fought back and led 53-52 at the end of the third quarter. Fort Worth Funk was hungry on the boards and took and created smart shots. This TCU Alumni team fought back, led by JD Miller and Brandon Parish.

He has 13 points midway through the 3rd pic.twitter.com/NfX2SmrRZq

Fort Worth Funk struggled to score, so their ability to defend brought them back into the game. They were able to cause turnovers and grab rebounds. With 3:35 left in the game, Team Arkansas forced a stoppage in play for free throws. Team Arkansas leads 66-59, setting the target score at 74.

A team of Arkansas basketball alumni hit a game-winning three to reach the Elam Ending target score in the first round of The Basketball Tournament! 💪

JD Miller finished with 20 points, 8 rebounds, and 2 assists. Parish ended with 11 points, 3 rebounds, 1 assist, 1 block, and 3 steals. Josh Hagins had an offensive rebound, ball movement, and a pass to CJ Jones for a wide-open 3-pointer to advance Team Arkansas to the next round, 74-70.

Jaylen Barford and Dusty Hannahs led this Arkansas alumni team. Barford put up 23 points, 12 rebounds, 1 assist, and 2 steals. Dusty Hannahs added 14 points, 4 assists, 1 steal, and 1 block. They will play Sunday at 1 CST against the winner of We Are D3 and Challenge ALS.

As the Purple & Black put its first point on the board from a free-throw opportunity in The Basketball Tournament, a slow start for these two teams. This opened the door as the Kansas State Alumni team came back and nailed a 3-pointer. Meanwhile, the Omaha Blue Crew struggled to find its rhythm fouling four times and taking seven shots before a made 3-pointer by Martin Krampelj. At the end of the first quarter in The Basketball Tournament for Purple & Black had eight turnovers to Omaha Blue Crew’s four turnovers but managed to lead 14-12. Omaha Blue Crew’s first appearance is missing many of its first shots, shooting under 25% in the first quarter of play. Omaha came back to lead at the half 31-27. This game continued to be a hard-fought back-and-forth battle as the Purple & Black-led 42-40 at the end of three-quarters of play in The Basketball Tournament.

We’ve seen this Kamau before

These two teams exchanged blow-after-blow in this tournament, dishing out threes, grabbing rebounds, and causing turnovers. With just under six minutes left in the fourth quarter of play, Purple & Black tied the score back at 48 off a beautiful three by Trevor Gaskins. Stokes extended the lead to four as the team went to a stoppage, and the Elam Ending with 3:54 left to play and a 52-49 for the Purple & Black. The final score will 60. The Omaha Blue Crew calls a timeout with the score tied at 57-57. Thomas Gibson struck first, finding an open lane and jamming it in, bringing the Purple & Black a single point away from victory and forcing the Omaha Blue Crew to shoot a three-pointer to win.

DEVERELL BIGGS JUST HIT ONE OF THE CRAZIEST ELAM ENDERS EVER. The Elam Ending is UNDEFEATED‼️@OmahaBlueCrew ADVANCES pic.twitter.com/QNQs8q9Wu6

For the first win in The Basketball Tournament, Deverell Biggs a prayer with time expiring to win 60-59 and advance. The Omaha Blue Crew shot 13% from 3-point land to Purple & Black’s 23%. The Blue Crew was led in scoring by Deverell Biggs, who came off the bench. Due to his last-second three-pointer, he scored 14 points, three rebounds, and two steals. His help came from Gregory Smith, who added 13 points, eight rebounds, two steals, and a block. Jahenns Manigat filled out the double digits with 11 points, three rebounds, three assists, and five steals. The Purple & Black were lead by Thomas Gipson III’s 19 points, four rebounds, and one steal. Kamau Stokes added 12 points, six rebounds, four assists, and one steal. The Omaha Blue Crew will face the winner of AfterShocks and the Ex-Pats. This game will take place Sunday at 3 CST.

Demers has 17 midway through the 3rd pic.twitter.com/JT3auuwEHm

Another slow start to the third game of the day at the Wichita Regional for The Basketball Tournament. Both teams coming out a little flat and learning how each other play. Challenge ALS was on the board, first off a quick feed into a posted Dominique Johnson for a jam. However, We Are D3 would find some scoring ability making the first 3-pointer of the game on a wide-open look from the corner by Adam Fravert. We Are D3 would take the lead into the end of the first quarter, 16-12. The big difference between these two teams is from the get-go. Both teams are hungry for the ball, fighting for rebounds and loose balls. A beautiful pull-up shot by Daquan Brooks allowed We Are D3 to take the lead into the half 32-30 over Challenge ALS.

The size of Challenge ALS is really causing issues for We Are D3 as it is allowing more second-chance shots to be put up and for turnovers to be caused for breakaway points. However, Brooks has been a monster leading this team on fast breaks and keeping this long Challenge ALS team on its toes. Marvelle Harris and Dominique Johnson were the offense for the first four minutes of the third quarter to put the team in the lead 38-36. A rebound and putback by Deshawn Stephens assisted these two to take the lead by 4. However, We Are D3 had Eric Demers off the bench, who continued to score and make some great shots, as well as Daquan Brooks.

Unfortunately, it wasn’t enough as Challenge ALS took the lead into the fourth quarter, 50-46. The final score must be 66 or higher as Challenge ALS took a time out with 3:57 left on the clock up by six to force the Elam Ending. Challenge ALS was too much for We Are D3 to handle as Eric Demers and Daquan Brooks could not will their team to victory. Demers finished the game with 25 points, one rebound, one steal, and two blocks.  Brooks finished with 17 points, two rebounds, five assists, and a steal. No other player from We Are D3 put up more than 5 points. Meanwhile, Challenge ALS won on a gift from The Basketball Tournament as the ball is live over the rim after it hits it. A slam dunk by Deshawn Stephens ended the game 67-60. Marvelle Harris leads Challenge ALS with 21 points, seven rebounds, three assists, and a steal. Deshawn Stephens followed with 12 points, 10 rebounds, one assist, four steals, and a block.

After a minute of gameplay and a loud crowd, Josh Nzeakor had enough for the Ex-Pats and slammed one in, hanging on the rim for a technical foul. Giving Conner Frankamp the first point of the matchup on a free-throw and possession. Tyrus McGee took the opportunity off an offensive rebound to put it back and take the AfterShocks’ first lead of the game. Another slow start as teams continue to feel each other out and find open shots. At the end of the first quarter, The Ex-Pats led 13-7.

PRENTISS NIXON IS DOMINATING FOR THE @EXPATS21 🔥🎯

He has 21 points and counting! pic.twitter.com/lVwr3CNgGS

After a really slow start, The AfterShocks found some life, as did Charles Koch Arena bringing this Wichita State Alumni team to within two points going into the half. The Ex-Pats, I am sure felt victorious as they took the lead into the half 21-19.  Coming out of the half, Conner Frankamp opens up scoring again with a big three, his first of the game. Zach Thomas gave the next blow before  Kelly and McDuffie built a lead 26-23. Prentiss Nixon brought the score to 26-25 as the Ex-Pats continued to fight in the third quarter. The AfterShocks were able to take the lead heading into the fourth quarter 40-36 as the team settled into their shots. After a foul by Tyrus McGee, the Elam Ending was enacted putting the final score at 60 with the AfterShocks leading 52-51 in the Basketball Tournament.

RASHARD KELLY WINS IT FOR THE @AfterShocksTBT‼️🔥

Zach Brown took the first dagger shot for Wichita State followed by Conner Frankamp and finally, a finishing lay-in by Rashard Kelly to put the AfterShocks onto Sunday with a final score of 60-53. The AfterShocks were led by Rashard Kelly’s 16 points, 13 rebounds, three assists, and one steal. Conner Frankamp followed closely behind after an 0-for-4 start to finish with 15 points, one rebound, four assists, and one steal. In defeat, the Ex-Pats were led by Prentiss Nixon who put up 21 points, six rebounds, and one steal. His only help was Josh Nzeakor who added 10 points and four rebounds. The AfterShocks will face off against the Omaha Blue Crew on Sunday at 3 CST.