NIL: How Myles Powell and others Just Missed out on a Fortune 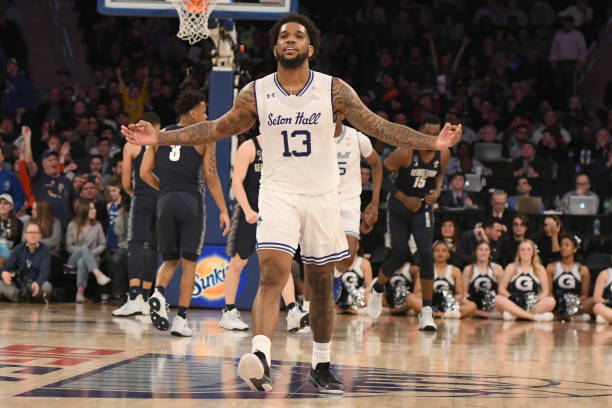 NIL, or names, image, and likeness will now be the main way college athletes will be able to profit. Some players, like Myles Powell, just missed out.

Some people just don’t get lucky and for athletes, this rings true very often.

Scouts don’t see recruits how they’d like to be seen. The luck of one player hitting a game-winning shot from halfcourt is always another’s misfortune. March is almost more synonymous with the final hoorah for college legends instead of the cry of victory for who finishes the tournament on top. For Myles Powell, Luka Garza, Cassius Winston, and many others, the NIL just proved that sometimes it’s about being in the right place at the right time.

The players who are in the exact right spot at the right time didn’t waste any. When the clock struck midnight on July 1, numerous high-profile college athletes started cashing in on their names, images, and likenesses.

Iowa’s Jordan Bohannon wasted no time announcing his own clothing brand on Twitter. He’s already sold numerous items and even has a raffle for game-worn shoes.

The preparation that went into landing deals or dropping personal brands didn’t just happen in time with the midnight clock. Business ventures, whether as complex as an endorsement or as simple as signing autographs at the local mall, all take planning. These aren’t just gifted athletes signing checks. They’re putting real-life marketing skills to the test to better themselves and their families.

Almost a month after the state of California passed a law prohibiting schools from punishing athletes for accepting endorsement money while in college and the NCAA officially recognized it might be time to seriously look at the changing world around them.

This was no longer just student-athletes calling for a few extra bucks. This was the NCAA realizing the power student-athletes rightfully have. They were no longer gifted amateurs playing sports. The NCAA had grown into one of the most powerful organizations in modern history. With it grew the changing atmosphere of student-athletes playing at the highest level of amateur sports, voicing for rightful representation, and realizing just how much they’re actually worth.

During that time, college basketball had some of the best four-year players it had seen in quite some time. Michigan State’s Cassius Winston, Seton Hall’s Myles Powell, Marquette’s Markus Howard, and Oregon’s Payton Pritchard all dominated the hoops landscape. Iowa’s Luka Garza was one year behind but was already on his way to becoming one of college basketball’s biggest stars of the 21st century.

Garza, Howard, Powell, and Pritchard would all go on to make First Team All American honors. Winston was named to the second team, just one year after being named to the first team in 2019. Garza would repeat as a first-teamer in 2021, also taking home some hardwood as the John R. Wooden National Player of the Year.

Winston was the ESPN poster boy. He was the lone blue blood star (if you consider the Spartans on that level) and had already made a name for himself the year prior. His brother passed early on in that year, ultimately carrying that sadness with him for the remainder of the season and still playing through unimaginable feelings. But Winston left a legacy that Michigan State fans still remember and probably will continue to for a long time to come.

Spartans head coach Tom Izzo had unrelinquished heartfelt feelings toward Winston. Before senior night in 2020, Izzo expressed that clearly. “I love him,” Izzo said. Winston was that special of a player for all of Michigan State.

Myles Powell was the hard-working, fun-loving competitor that college basketball fans came to adore. He traveled a road not often taken, deciding to attend Seton Hall University while holding offers from plenty of other well-known programs.

Powell came at the right time, basking in the star power of Angel Delgado and then taking over as the lead man himself and bringing the Pirates to new waters. This included a Big East Championship appearance, four straight NCAA Tournaments, and wins over programs like Kentucky and Villanova. You couldn’t put one foot in South Orange – or even Essex County, given he had numerous billboards around town – without hearing something about Myles Powell.

The Big East wasn’t just a one-trick pony in 2020. Myles Powell and Markus Howard made up the best guard duo of any conference in college basketball that year.

Howard used a lethal three-point shot to become the Steph Curry of the Big East. He eclipsed 30 points or more 15 times that season alone, with a career-high of 51 points against USC. At 5-foot-11 he used a quick release and unending range to stretch opposing defenses and light them up in the process.

He’s already gotten his chance to make his money in the NBA, signing a rookie deal worth over $500,000 with the Denver Nuggets. Howard played in 37 games and made one start, so the potential is there for the former Marquette star to earn some more bucks as the road progresses.

Imagine if the odds didn’t work in his favor. Howard went undrafted, but the chips fell in his direction. Plenty of players of his caliber haven’t been that lucky (and no, I’m not diminishing his skillset by any means).

Are you noticing a pattern yet? Whatever the answer is, the point being proven is how the NCAA flat out GIPPED so many college stars – whose names, images, and likenesses were arguably bigger in college than some professionals – from a lot of money.

In just a two-year span, other college megastars like Luka Garza, Payton Pritchard, and Udoka Azubuike easily could’ve used that stardom to create financial stability. Now, their stardom shrinks at the NBA level.

Remember Scottie Reynolds? He was an All-American at Villanova who went undrafted and never played one game in the NBA. Myles Powell might be headed in that direction right now.

Reynolds earned the right to be drafted, but the NBA has never cared about feelings. Unfortunately, the NCAA has hardly cared about basic rights, which could’ve easily put someone like Pritchard in the same place as Reynolds had the Boston Celtics not seen something in him they liked.

The NCAA as an organization is to blame.

The stubbornness of the NCAA has culminated in so many stars who lost out on money, Microsoft Excel might have trouble fitting it all into one spreadsheet. (If you don’t get that joke, I guess my short-lived stand-up comedy career is over).

Unfortunately, it’s often not a joke. A lot of these college stars are working to keep food on the table at home. If the NBA doesn’t pan out, there are a lot of fallback options overseas, but that shouldn’t have to be the fallback option.

It isn’t easy to have your dreams of making it to the NBA totally crushed, only for the ‘apology’ to be something like “I’m so sorry Johnny, but at least there’s a lot of options a few thousand miles away in this foreign speaking country!”

Along with that apology is the unforgiving NCAA, who can just replace Johnny with another star, because after all, they’re still making the money.

That has been the swan song of college basketball players and athletes for generations. And it’d be close to impossible for the NCAA to foreseeably, equally, or realistically make it up for those who lost money. That’d be a multi-million, even billion-dollar job.

The rule of amateurism effectively cost players and families millions, but also ripped them from better lives while the NCAA took it to the bank without the blink of an eye.

I don’t want to pass judgment down on any NCAA workers or officials. The problem is more institutional than personal.

Nearly two years since that initial California law was passed and the NCAA has finally got on board. The NIL allows players in all sports – college basketball being one of the biggest – to make money in all sorts of ways. There are still some restrictions – after all, why wouldn’t there be – but the positives far outweigh the negatives.

Stars heading into this year like Kofi Cockburn and Drew Timme will have all the opportunity to make tens if not thousands of dollars this season. Deals could even reach the millions.

However, you have to feel for the players who were just on the brink of the NIL passing, but eligibility expired after it ran out. That’s just not an easy pill to swallow.

With the NIL passing, there’s a lot of celebration in college athletics and rightly so. It seems as if a long battle was finally won in favor of the good guys.

Former U.S. President Barack Obama once said, “We honor those who walked so we could run.”

Of course, he wasn’t talking specifically about college basketball, but it all still applies. Myles Powell, Cassius Winston, and Luka Garza saw the change happening but never got to benefit from it. Unfortunately, luck just doesn’t always fall to everyone.