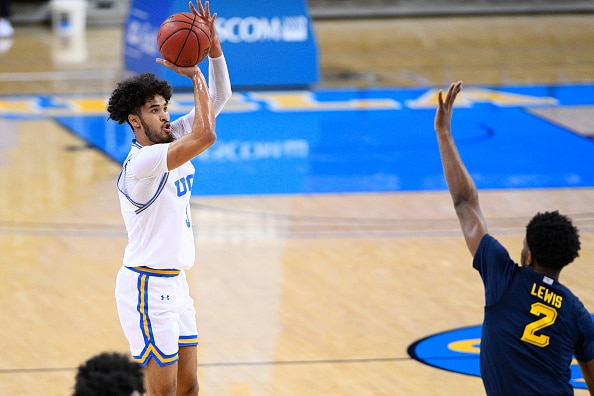 JULY 7 5:00 PM UPDATE:
From this list, Kofi Cockburn, Jaden Shackelford, Julian Champagnie, Geo Baker, and Hunter Dickinson have withdrawn from the NBA Draft but that does NOT mean they will return to their former team.

Aaron Wiggins and Jason Preston have chosen to remain in the NBA Draft!

Johnny Juzang, Max Abmas, Isaiah Mobley, and Ron Harper, Jr. have not announced their intentions as of this update! The deadline is Midnight! See below for specifics on each player!

While we at the CBB Review hope you are enjoying food, family, and fireworks this Holiday weekend, there are several college players contemplating their immediate future making key NBA Draft decisions over the next few days.

The NBA announced today that 353 players – 296 players from colleges and other educational institutions and 57 international players – have filed as early entry candidates for NBA Draft 2021 presented by State Farm.

The deadline for college players to withdraw from the NBA Draft and maintain their college eligibility is Wednesday, July 7. The players below have important NBA Draft Decisions to make over the next 48 hours or so.

Those decisions will not only impact their immediate future but also their current college team, provided the player has not entered the transfer portal to possibly take his talents to a different campus.

A Second-Team all-SEC selection last year, Shackelford’s return to Nate Oats’ Crimson Tide squad would give Alabama a chance to repeat last year’s Elite 8 type season. He averaged 14 points and almost four rebounds per game. Teammate Josh Primo recently announced he was staying in the draft, which makes Shackelford’s decision all the more important for the Crimson Tide faithful.

UPDATE: Jaden has withdrawn from the NBA Draft, but is also in the portal so his destination for the 2021-2022 college season is not known.

They have been tied at the hip for the last three years helping Rutgers emerge as a legitimate NCAA Tournament team the last few years. Neither is listed in ESPN’s top 100 players available released July 1. A return to Piscataway would make Steve Pikeill happy and go a long way to making the Scarlet Knights relevant in March for the second straight year. The duo averaged 25 points combined last season.

Ron Harper Jr. on the board with an early three-pointer! #MarchMadness | #GardenStatement pic.twitter.com/8QkDGyVl3y

UPDATE: Geo Baker has withdrawn from the NBA Draft and will return to Rutgers!

Champagnie is one of a few players on this list who will impact his college team’s ceiling next year the most. The First-Team all-Big East selection who averaged almost 20 points and over seven rebounds per game would spearhead a team that could hear its name on Selection Sunday. If he stays in the draft, the Red Storm will have a hard time finishing in the top five in the Big East.

UPDATE: Julian has withdrawn from the NBA Draft and will return to St. John’s!

Preston is in the same category as Champagnie. A return to Ohio and the Bobcats can repeat their March Cinderella run again and be one of the top mid-majors in college basketball next season. But Preston may strike while the iron is hot and ride his strong march play into a second-round pick. Preston is ranked 43rd in ESPN’s top 100 players available.

UPDATE: Jason has chosen to remain in the NBA Draft!

Mark Turgeon has a Final Four caliber team, IF Wiggins returns. Wiggins exploded on the scene last year and averaged 14.5 points and 5.8 rebounds. It would give the Terps a dynamic 1-2 punch with Eric Ayala also returning. Add in transfers Fatts Russell (URI) and Qudus Wahab (Georgetown) and Maryland just might be the Big 10 preseason favorite with Wiggins committing to another year in College Park.

UPDATE: Aaron chose to remain in the NBA Draft!

Don’t confuse Isaiah with Evan. His younger brother is a sure-fire top-five pick in a few weeks. Isaiah could join his brother in the Draft, but another year in college may be more beneficial. He’s ranked 86 in the ESPN top 100 players available so his stock could rise with a breakout junior season and potential Pac-12 Player of the Year candidate.

Dickinson has an NBA game but may not be ready just yet. A second season under the tutelage of Juwann Howard would serve the 7-1 second-team all-American well. But, you can’t teach height and his offensive skill set is sneaky good. Another reason to return to Michigan is that the Wolverines will be really good with the skilled big man back in maize and blue.

UPDATE: Hunter has withdrawn from the NBA Draft and will return to Michigan!

Oral Roberts was one long three-pointer from an Elite Eight appearance last year. Abmas and his 25 points per game and 43% long-range shooting were the main reason why. The diminutive guard will have to decide to ride the wave of his stellar March play or return and prove himself again. The relevance of Oral Roberts will depend on it.

Oral Roberts’ Max Abmas (25 points) couldn’t get the buzzer beater to go down.

He would’ve covered his #MKF line of 25.5 points and sent ORU to the #Elite8. 😐 #MarchMadness pic.twitter.com/NQTbSlQXNS https://t.co/uxaragaSIS

Even though the Bruins didn’t even reach the title game, you could argue Juzang was the best player in the NCAA Tournament. He scored 20 or more points in four of the five Bruins post-season games, including 28 of UCLA’s 51 points in their win over Michigan and 23 in a dramatic First Four win over Michigan State. Juzang might have the toughest decision on this list – capitalize on his fine March run or return to UCLA and be the main guy on what would be the consensus pre-season #1 team in the country.

Less than a week ago, Juzang was the easy choice to be ranked first on this list. Then, Kofi Cockburn entered the transfer portal at the 11th hour. He could stay in the draft. He could return to Illinois. He could play on a different college campus next season. He was the only player to average 15 points, nine rebounds, and shoot over 60% from the field last season. He averaged 17.5 points, 9.5 rebounds, and shot 65% from the field. Oh yeah, he led the nation in dunks with 78 last season. His decision, along with Juzang, will shape the pre-season rankings the most.

Kofi Cockburn might be the best player to enter the transfer portal, since the transfer portal became a thing. Why the All-American may just come back to college. Why Kentucky might just be where he ends up + more regarding the big man from @Aaron_Torres https://t.co/LmN4oesFQ4

UPDATE: Kofi has withdrawn from the NBA Draft, but is also in the portal so his destination for the 2021-2022 college season is not known.