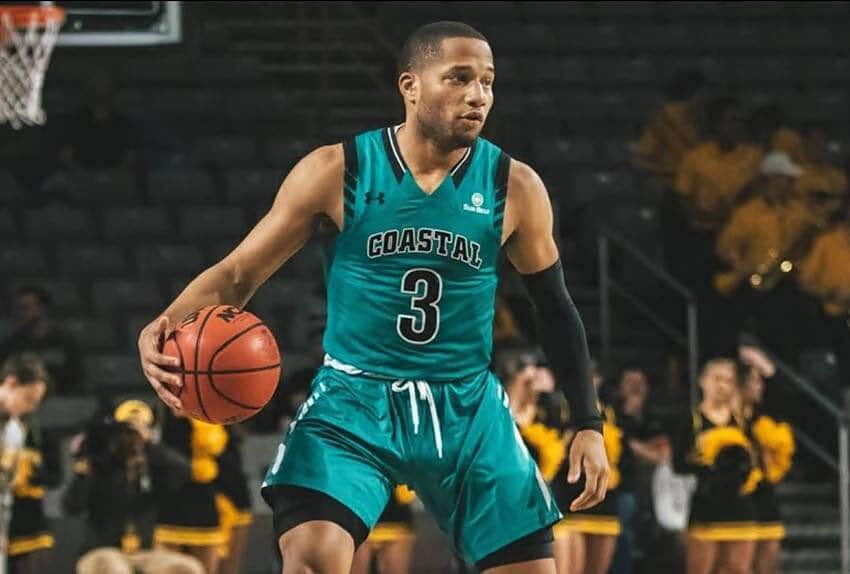 From Redshirt to Conference POY, DeVante Jones has done it all.

The 6’1 guard proved this year that good things come to those who wait, averaging 19.3 points, 7.2 rebounds, and an amazing 2.8 steals per game this season. The Coastal Carolina star will most likely not be returning there next year, after declaring for the draft earlier and recently announcing he will be entering the transfer portal as a grad transfer. In this interview, we talked about sitting out a year, Coastal Carolina’s amazing season, and DeVante Jones’ future.

1) Coming out of high school, what made you decide on Coastal Carolina?

DeVante Jones: The selling factor probably was the environment. In New Orleans, we don’t have the beach so just me seeing that up front got my attention. My mom wasn’t able to come on the visit with me but we got to show her a video, and when she saw it she cried and to see her happy was a joy for me so it was a no brainer.

2) You sat out your freshman year as a redshirt. How was that experience and what did you learn from it?

Jones: It was a tough experience knowing that I could have done things differently to make sure I could have played my freshman year. It was something that I needed, I had adversity early and it definitely helped me out. I didn’t go through it alone, it was my family, my teammates, and the coaching staff still believed in me. It was a hard process but to have that circle around me made it a lot easier.

If I could go back in time, I would probably do it again because it would help me learn and humbled me early. Coming to college, I thought that being an athlete I could slide by, but they prided me on being a student too which I definitely needed.

3) You made a big jump in most stats this season after an impressive season last year. What was one thing you worked on this off-season to get to this level?

4) What was it like playing in this COVID season and what was the biggest positive and negative from you from that?

Jones: The negative side of it probably was not knowing if you were going to play or not, it was always one thing that was running through my mind. The positive thing about it was that it brought my team closer together knowing that we had to follow certain guidelines. Our coaches said, wear your mask everywhere, be distanced, don’t go out partying. This really helped our team go farther than we usually do because we all bought into the process. We understood that if we wanted to play basketball we have to follow those guidelines. We only had two games canceled, our games against Appalachian State and Georgia State.

5) This was by far Coastal Carolinas best season since joining the Sun Belt, what was the main reason for the big turnaround after being very average the last few years?

Jones: I can’t take all the credit. I would have to say the coaches did a great job of bringing in a group of guys that could build around me and bringing in guys who can score off the bench immediately, and all my other teammates who all contributed in big ways. In the previous years, we had players that didn’t have that chemistry this year. I gave the credit to all the coaches and my teammates for buying in and trusting the process.

6) You recently declared for the NBA draft. What was the reason you decided to do so?

Jones: I felt like it was time. I prayed about it, talked to a lot of people and they said it was the time to do it. This was probably my best year, winning player of the year. I feel like it came down to me getting a feel of why I’m really doing this. After talking to my coaches and NBA players that I’m close with, they said it was the perfect time to do it. It’s still surreal right now as I’m going through the workouts to get ready for the NBA teams. It’s been my dream since I was 8, so finally being in this position is crazy but I have to stay focused on the main goal which is get to the league and take care of my family and I’m thankful to be where I’m at right now.

7) Congrats on winning conference player of the year this year! What was that feeling like when you found out?

Jones: It was crazy because I got a new phone number around the time so my head coach told me that morning but I didn’t see it because I had a new number. I went to the gym and he asked me, “Did you get the news?” and I said, “What news?”, and he said “Player of the year”. I said wow and then broke down and got emotional because last year I told my coach that I was coming back to get player of the year. I felt like I was the best player in that conference and had a lot more on my plate than any player in the conference did.

Last year when I made the second team, a lot of coaches thought I got snubbed from the first team, but I didn’t disagree because our record was bad. This year, I prided myself on doing whatever it took to make sure I made that jump as a player and as a team. It was an amazing honor to get that. I thank all my teammates because without them I definitely wouldn’t be in the position that I’m in. I have to thank the managers for traveling with us and for everything they did, and last but not least the coaches. I feel like it was a team award instead of just being an individual award.

Jones: It’s mental for me. Going into a game, I don’t limit myself because of my height, I don’t see any guards at the highest level limiting themselves. It’s all about mental for me knowing that if I want to stand out being 6’1, scoring a lot is cool, but I feel like rebounding stood out to a lot of scouts. It’s something I kept trying to build on, and I took it personally to get every rebound I could because I feel like if I get a rebound it can help my team win a game because it’s an extra possession.

9) What is one thing you want to work on this off-season?

Jones: Right now, I’m working on my range, getting it deeper than what it was. I’m also working on different reads off of ball screens, getting faster, and being more consistent with my jump shot, floater, and midrange. I want to work on every aspect of the game on offense and be able to do different things, especially on defense. I watched film on myself earlier from my trainer and I was gambling a lot and not moving my feet. I want to be the ultimate two-way player.

10) Do you have any individual goals for next season, whether in college or at the pro level?

Jones: If I go to the NBA, a goal for me would to be rookie of the year. That’s a high goal but I’ve never set my standards too low so that would definitely be a goal of mine. I want to compete at a high level, and not trying to be friendly on the court because even if I’m on the court with Lebron or KD, that’s cool but I want to compete and earn my stripes on the court.

If I come back to school, I definitely want to win a national championship and make March Madness. I haven’t made it since I’ve been in college. I also want to win (conference) player of the year again and build bonds with people across the country and end my college career a champion.

BONUS: After the interview, Devante Jones announced he would enter the transfer portal as a grad transfer. I asked him a few questions about this below.

1) What was ultimately the reason you decided to enter the portal?

DeVante Jones: Just wanting to give myself the best chance possible to fulfill my ultimate dream goal of being a NBA player and also the change in staff played a major role as well.

2) How will you conduct your search process for finding a new school?

Jones: Throughout the process I won’t be that involved in with the schools because I’m 100% focused on the NBA draft so that will be mostly my mother and father being involved with talking with the coaches.

3) Do you have any timetables for when you want to cut your list and make your decision?

Jones: No timetables yet. but that will come whenever i get time to get to that because like i said before NBA is my main focus right now and if a school really need/want me I hope they could respect my mindset.