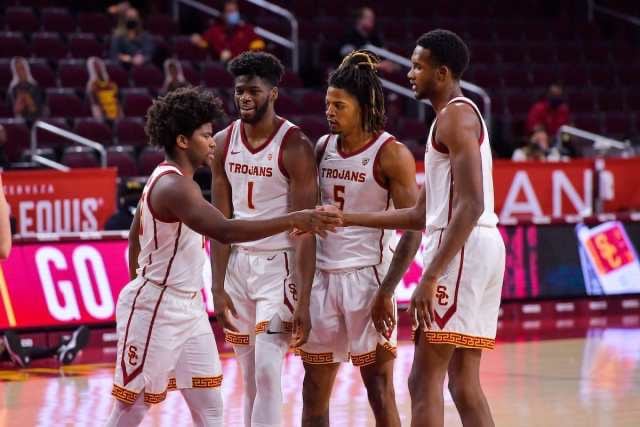 Indianapolis, Indiana – In a season when the PAC-12 was seen as the weakest conference in college basketball history by some critics (I admit I was one), it has now produced three of the tourneys last eight teams standing. One of those teams was the Trojans of USC. Tonight, the Trojans joined their conference counterparts (Bruins and Beavers) in the Elite Eight by defeating their southern PAC-12 rivals, the Ducks of Oregon, by a score of 82-68. While the Ducks gave a strong battle on the night led by Eugene Omaruyi’s 28 points and 10 rebound performance, the Trojans were just a little more well rounded by placing four players in double figures led by 6’7 Isaiah White’s 22 point 5 rebound night.

If this USC-Oregon matchup was anything, it was just the coronation to see which team would be the third jewel in the crown of eight representing the PAC-12.

The Ducks and Trojans battled valiantly in the first few minutes of the first half of this battle of west coast teams in the country’s bread basket region…. but then USC zoned out…. literally. Head coach Andy Enfield switched from a pressure man defense to a 2-3 zone which was long and kept the Ducks out of the middle. The result? USC hit some big threes and pushed their lead from one to nearly twenty and never relinquished it. If this game showed anything it was that the PAC-12 has some teams that were very underrated and that may actually contend for a Final Four berth come Monday and Tuesday night.

2. The PAC-12 Had Some Stars That Shone Brightly During Tournament Time In This Game

The Ducks may have lost the game but they had a couple of nice contributions from Eugene Omaruyi with 28 points and Chris Duarte with 21 points. In what may be seen as another PAC-12 game for some had great meaning for others. Seeing the tears in the eyes of Eugene Omaruyi as he came off the floor after leaving everything out there is a true representation of how each team has played from the PAC-12. The Trojans are definitely riding a wave of momentum though. Being led by seniors Isaiah White (22) and Tahj Eaddy (20) while adding in the Mobleys, Isaiah (13) and Evan (10) who are a sophomore and freshman respectively, will only add to the future star power that USC should have for the future to come. Andy Enfield is no slouch himself. This is Enfield’s second time in the tourney after leading Florida Gulf Coast, a.k.a. Dunk City, into the NCAA Tournament on a nice run not long ago.

3. The PAC-12 Should Hugely Benefit From This Tourney In Recruiting

Save a meeting in the Sweet Sixteen by the Trojans and Ducks, we could easily be seeing half the field of the Elite Eight from the west coast. Think about that. Half the field from a conference that was respected by no one. Even the selection committee who by hearing most people talk gave the PAC-12 five tourney teams because they felt sorry for them. Oregon State, an Elite Eight team, only got in because they won the PAC-12 tournament. Where were the Beavers predicted to finish? In the PAC-12 cellar. Dead last. UCLA? They are just the second team to play in a first four game and make it past the Sweet Sixteen. The other team to do so? Shaka Smart’s VCU Rams in 2011 who went to the Final Four. Well in the words of Drake, the Beavers and the Bruins, as well as the rest of the PAC-12, started from the bottom now we’re here. And the view from here is mighty fine. The chances of seeing many PAC-12 teams in the Final Four after Tuesday are slim to none in the eyes of the critics. The same critics who said the PAC-12 was the worst basketball conference in history. Well… history hasn’t been good to the critics so far… so don’t count out the PAC-12 for anything. Even a national championship.