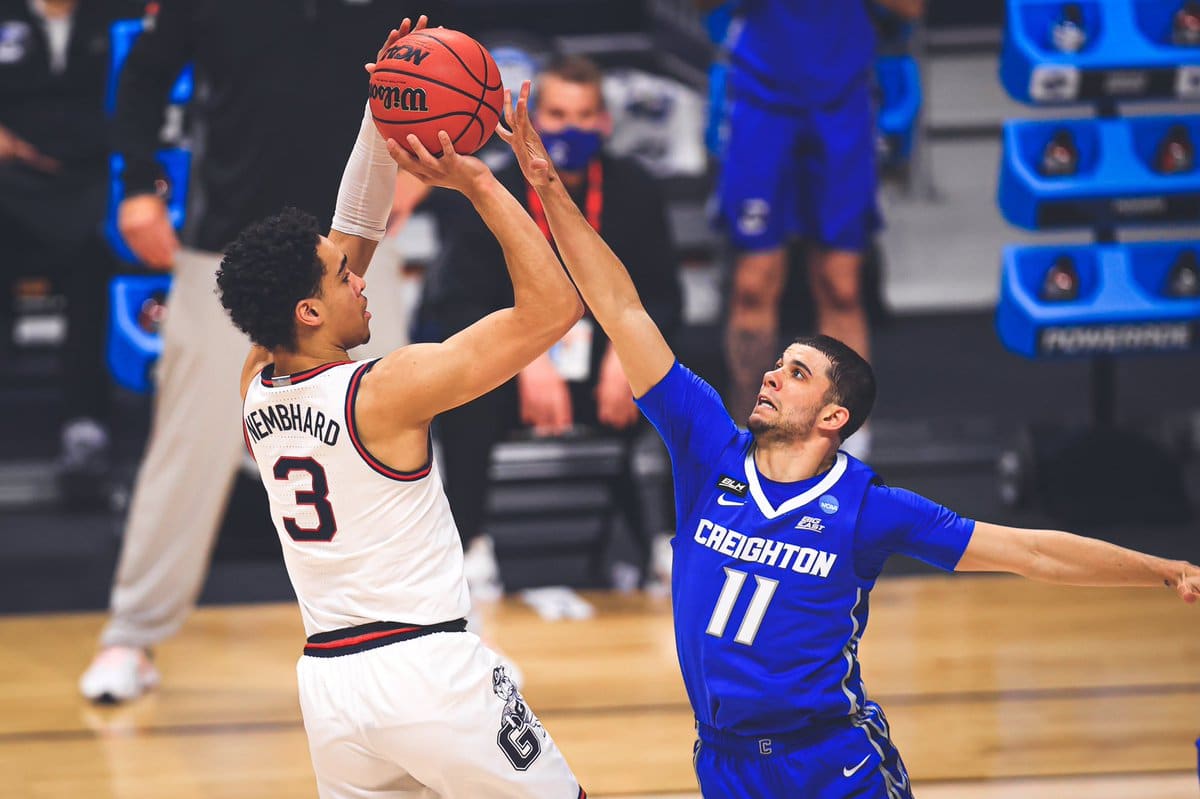 Gonzaga basketball won with a score of 83-65 over the Creighton Bluejays. Gonzaga was lead by 22 points, six rebounds, and four assists from Drew Timme.

Gonzaga called Andrew Nembhard’s number to step up in today’s game as he was able to score 17 points, grab four rebounds, and hand out eight assists. Joel Ayayi put up 13 points, added eight rebounds, and handed out an assist. Finally, Corey Kispert added 12 points, 7 rebounds, one assist, two steals, and one block in the Gonzaga basketball win.

Gonzaga will play the winner of a Pac-12 matchup between Oregon and USC. This game will be played on Tuesday night.

For Creighton basketball to end Gonzaga’s basketball perfect season, the Bluejays needed to make easy buckets. Creighton basketball was able to move the ball and find open shots, but they struggled to find a soft touch or enough hop to get the ball into the hoop when close to the basket. There were eight or nine opportunities where the team had an easy putback but ended short or was too hard.

Creighton basketball needed to force the issue and go at these Gonzaga Bulldogs. In the first half, Creighton made it to the line once and missed both free-throw opportunities. Going into the half, Coach Gregg McDermott needed to focus on driving to the basket and hoping to draw the foul or kick for the shot. The Bluejays weren’t in a horrible position being down 43-33 at the half to Gonzaga.

This is why Gonzaga basketball has been so dominant. The team does not force the game. The Bulldogs make the shots that they are supposed to and then proceed to make tougher shots. Gonzaga makes solid cuts, rebounds the ball, and makes the shots around the basket.

Corey Kispert with the 3 💯

Coach Mark Few has continued to be a dominant force, which comes from coaching his Gonzaga basketball team to execute. The Bulldogs know how to space, trust each other’s timing and run its plays to perfection. With the addition of talent, skill, and occasional luck, Gonzaga basketball was able to dominate this game. The Bulldogs have better skill players in Corey Kispert and Drew Timme that give most teams issues. These two players take smart shots, can drive, but also have solid outside shooting.

While these two should be enough, Jalen Suggs is a facilitator, and if he gets into trouble, Andrew Nembhard comes in to run the point. Suggs is the third-highest average scorer in points per game behind the two stars. Then the sharpshooter of Joel Ayayi forces teams to remain honest instead of clogging the lane against the two stars. All four of these players are averaging double-digit points per game this year—the ball movement and ability to find the cutters and finishing with points in the paint.

Joel Ayayi heating up from 3 👀

B2B threes for the Zags pic.twitter.com/I8JjCFGbLP

Keeping the players in front

A huge part of the teams remaining success is the ability to keep the offensive players in front. Gonzaga basketball exerted this ability against Creighton as just being in front of them made the Bluejays uncomfortable. Creighton’s being bothered was present as the team struggled to finish shots and do the basics. Gonzaga basketball really exploited this in the second half, leading to a couple of Creighton turnovers for easy buckets. Creighton shot eight free-throws, with Gonzaga basketball only having 12 fouls. Keeping the man in front of you and having good footwork will force teams to have crisper ball movement and make their shots.

College Basketball Players Who Had The Best Year Of 2022