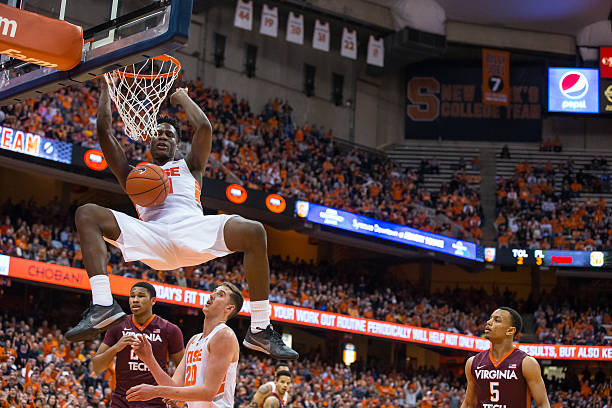 It’s been the Syracuse basketball way the past half-decade. Three out of the last five NCAA Tournaments, the Orange have advanced to at least the Sweet Sixteen as a double-digit seed. At this point, it’s become more than just a yearly joke, but actually, something to say about Jim Boeheim’s coaching job. He takes quality teams to the postseason and seemingly elevates their play just in time for March.

This year, the Orange came into the season with hardly above average expectations. SU was sixth in the ACC preseason poll, and that’s just about where they finished once the season was over.

But then Syracuse basketball caught fire. The Orange won its last two regular-season games against solidified tournament teams North Carolina and Clemson. Then it beat NC State in the second round of the ACC Tournament – the third time the Orange defeated the Wolfpack this season. Cuse almost pulled off a major upset in the quarterfinals, just to lose on a buzzer-beater by Reece Beekman and one-seed Virginia.

Despite the loss, the Orange was selected as an at-large bid in the 2021 NCAA Tournament as an eleven seed. Since then, Syracuse has had two monster wins – a drubbing over six-seed San Diego State and an upset over three-seed West Virginia.

In those games and the ACC Tournament, Buddy Boeheim has been as close to lights out as it can get on a basketball court. The sharpshooter hasn’t scored below 25 points in any of the past four games and has connected on 24-of-43 threes in that span.

Combine that with the Syracuse 2-3 zone holding San Diego State for one of its lowest point totals all season, and West Virginia to below 38% from the field and the Cuse is clicking.

It’s actually relatively similar to 2016 when Syracuse’s run ended in the Final Four. That Syracuse basketball team actually skidded down the stretch but pulled off two upsets and two comebacks on route to the Final Four. And like the current team, it was built similar – a smaller and less-athletic team than some of the dominant Syracuse teams of past, but effective at the right time.

The 2016 team was led by seniors Michael Gbinije and Trevor Cooney, but freshmen Malachi Richardson, Tyler Lydon, and junior Tyler Roberson completely elevated their play in time for March Madness. Roberson was one of the big keys – he rebounded as well as he ever did in his entire career in Orange, which had a big play in the four wins Syracuse was able to secure in the 2016 NCAA Tournament.

Roberson said, “I just kind of knew what I was expected to do when I got out there. I just tried to do it to the best of my capability. I think I was just clicking pretty well during March as well as everybody else.”

On the entire season, Roberson averaged 8.8 points and 8.5 rebounds as a starting forward. But in those four games, Roberson averaged 10.3 points and 11.8 rebounds. The increase in rebounding was the biggest key. He pulled down 18 in the Round of 64 against Dayton, eight of them being offensive boards. But he also crashed the glass for putback dunks, second-chance opportunities, and at the very least, was someone opposing defense had to pay attention to. He struggled against North Carolina, but did provide a highlight-reel putback dunk.

During this year’s run, Syracuse basketball as a team has noticeably done a much better job inside.

“Even though they may be a little smaller, they have speed or they can do some of those things that maybe the bigger guys couldn’t do, so I think they just do a good job of using that to their advantage,” said Roberson.

So far, in its’ two NCAA Tournament games this year, the Orange have done as good as a job down low as it can. Against the Aztecs, Syracuse blocked eight shots and got a big contribution off the bench from Jesse Edwards who collected five rebounds.

This version of Syracuse basketball has also gotten a lot from Buddy Boeheim. He’s hit shots from as far as the logo and is doing so at an extraordinary clip. There’s a chance Houston will try to faceguard him whenever he steps over half-court. In that case, the Orange will need to get other players to step up. One answer could be Alan Griffin, who has recently been slammed in coach Boeheim’s doghouse. It’s a place Roberson was quite familiar with, which prompted a legendary quote from Boeheim.

But Roberson handled the harsh comment as well as anyone could – remembering that it wasn’t personal and strictly basketball related. He worked his butt off and it showed as he tore it up on the court during that Final Four run.

“I’m sure he (Alan) knows what he has to do, and I’m sure he’s competitive and he’ll come back stronger for the remainder of the tournament,” Roberson said. “That’s kind of the approach I took. I just tried to not think too much about it and just go out there and do what I have to do as a basketball player.”

If Boeheim is shut down, Griffin has as good an ability as anyone on this Orange roster to create his own shots and pick up some of the offense. Where Roberson did that on the glass for a Cuse team in need of strong play underneath, it could be Griffin’s time to shine by putting the ball in the basket and picking it up defensively, which is the main gripe of Boeheim.

That defense – the 2-3 zone – is perhaps the biggest reason for this tournament run and all of the others in the past. No matter how tall, small, athletic, or good any Syracuse team is, preparing for the zone in March is nearly impossible.

I think it throws a lot of teams off, especially when you see it for the first time all season, said Roberson. “It’s not like it’s conference play where teams are playing against it maybe twice or even three times depending on how far you go in the ACC Tournament. So I think that’s a huge factor in that.”

But all that aside, when Syracuse basketball players, coaches, and fans look back on this season, it’ll be a success. They totally blew away expectations in the NCAA Tournament to this point, which is a testament to the 2-3 zone’s success during March and Buddy Boeheim’s hot play. But from a non-basketball viewpoint, it’s also about the moment. A moment these guys won’t soon forget.

“My favorite moment accused was definitely that tournament run,” Roberson said. “I think they (this team) have a great chance at doing big things for the rest of the season, and as March goes, and I’m excited to watch.”

Tyler Roberson will be all Orange as his Syracuse basketball team plays Houston tonight in the Sweet Sixteen.