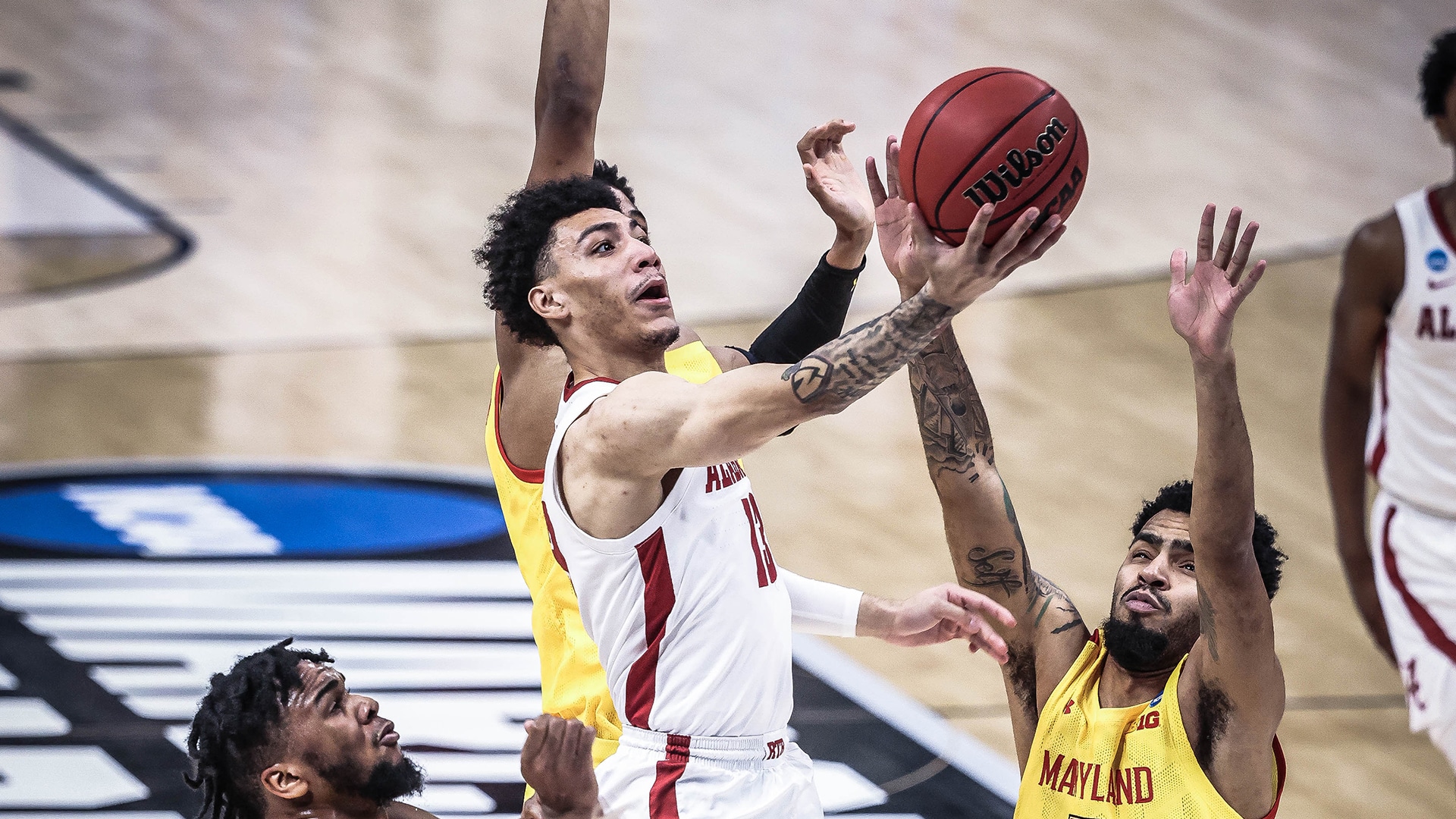 Now that we have watched and enjoyed the first NCAA Men’s Basketball Tournament in two years, let’s have some more fun! Let’s Re-Rank the Sweet Sixteen.

RT if your team is still dancing! #MarchMadness pic.twitter.com/qUZV5d0MjZ

There have been as many upsets as ever in this year’s tournament, none more shocking as seeing #2 overall seed Illinois losing to Loyola or Oral Roberts overtime win over Ohio State.

68 teams, well 67 since poor VCU never had a chance to play a game, have been whittled down to the final 16 teams. Some are surprises. Most are not. Now that the dust has settled on the first two rounds, let’s Re-Rank the Sweet Sixteen.

Beat #16 Norfolk State 98-55 and #8 Oklahoma 87-71
The Zags still haven’t lost. All year. They handled both teams with ease in the opening two rounds. They entered the event as the top overall seed and have done nothing to fall from that perch.Up Next: Sunday vs #5 Creighton

Beat #16 Hartford 79-55 and #9 Wisconsin 76-63
Baylor played like the Bears of their pre-Covid break. Their defense is back in mid-season form. Only two wins away from their Final Four goal.
Up Next: Saturday vs #4 Villanova

Beat #16 Texas Southern 82-66 and #8 LSU 86-78
Michigan was playing without one of its key players in Isaiah Livers but managed to win its first two games. They were tested against an under-seeded LSU squad in the round of 32, falling behind in the first half. However, Michigan pulled away late for an eight-point win.
Up Next: Sunday vs #4 Florida State

Beat #15 Iona 68-55 and #10 Maryland 96-77
The Crimson Tide struggled with Rick Pitino’s squad in the first round. They led by only one late in the second half. They played with more purpose and were never threatened in its second-round win over Maryland.
Up Next: Sunday vs #11 UCLA

Beat #15 Cleveland State 87-56 and #10 Rutgers 63-60
The Cougars throttled Cleveland State in the opening round before needing to rally to beat a  stubborn Steve Pikiell-led Rutgers team. Houston trailed as late as the final minute, got a conventional three-point play to take the lead, then made a key defensive stop to advance to the Sweet Sixteen.
Up Next: Saturday vs #11 Syracuse

Beat #11 Drake 72-56 and #3 Kansas 85-51
USC had two painless wins, one over five-loss Drake, before throttling three-seed Kansas in the second round by 34 points. Evan Mobley has proven why he will be one of the top picks in the NBA Draft this June. The Trojans are the second-tallest team in the tournament and they will look to achieve great heights with another win when they face conference-rival Oregon.
Up Next: Sunday vs #7 Oregon

That’s good for fourth among the teams still left.

We’ve got some history, and we’re gonna keep building on it 🐗 pic.twitter.com/txkiVwM69e

Beat #14 Colgate 85-68 and #6 Texas Tech 68-66
It’s been Hog heaven for the Razorbacks through two games in the NCAA Tournament. They struggled early against the darling of the NCAA Net Team rankings in Colgate before winning a second-round classic contest against Texas Tech. All that stands in the way between Arkansas and their first Elite-8 berth since 1995 is pesky 15-seed Oral Roberts.
Up Next: Saturday vs #15 Oral Roberts

Beat #9 Georgia Tech 71-60 and #1 Illinois 71-58
Loyola arguably had the most impressive win over the weekend when they beat consensus two-seed Illinois to advance to the Sweet Sixteen. Their first win came against another conference champion in Georgia Tech. Their reward, another conference champion, Oregon State.
Up Next: Saturday vs #13 Oregon State

Beat #13 UNCG 64-54 and #5 Colorado 71-53
The Seminoles, like Alabama and USC ranked above them, looked better in their second-round win over Colorado than they did in the opening round against UNCG. They will need to play even better with Michigan waiting for them in their Sweet 16 contest.
Up Next: Sunday vs #1 Michigan

Beat #10 VCU (No Contest) and #2 Iowa 95-80
Oregon advanced to the Sweet 16 with only one win, albeit an impressive one of second-seeded Iowa. They advanced to the second round when VCU was hit with multiple Covid-19 tests and was forced to forfeit the game.
Up Next: Sunday vs #6 USC

Beat #6 San Diego State 78-62 and #3 West Virginia 75-72
The Orange are rolling at the right time of the year – March. This leads to a yearly Syracuse dilemma – do they overachieve in the postseason or under-achieve in the regular season? The answer may be neither. Their zone gives teams fits in March as witnessed by their third Sweet 16 appearance as a double-digit seed in the last five years. However, that same zone isn’t as effective against ACC teams who see it on a yearly basis in league play.
Up Next: Saturday vs #2 Houston

Beat #11 Michigan State 86-80 (OT), Beat #6 BYU 73-62, Beat #14 Abilene Christian 67-47
The only team to win three games in this year’s tournament, UCLA needed to rally and force OT to beat Michigan State just to get into the main draw. They then disposed of BYU and Abilene Christian with relative ease. Johnny Juzang is scoring in bunches through three games.
Up Next: Sunday vs #2 Alabama

Beat #12 Winthrop 73-63 and #13 North Texas 84-61
The Wildcats limped into this event with key injuries, mainly to point guard, Collin Gillespie. However, you can never count out a Jay Wright-coached team. He had his team ready to avoid one of those dreaded 5-12 upsets in beating Winthrop, then avoided Purdue when North Texas upset the 4-seed Purdue Boilermakers.
Up Next: Saturday vs #1 Baylor

Beat #12 UCSB 63-62 and #13 Ohio 72-58
No one entered this tournament off a worse loss than Creighton, a 30-plus point defeat at the hands of Georgetown in the Big East title game. All the Blue Jays did to rebound was beat a veteran UCSB squad by a point, then easily disposed of upstart Ohio in the second round. Their reward is a date with top-seeded Gonzaga.
Up Next: Sunday vs #1 Gonzaga

Beat #5 Tennessee 70-56 and #4 Oklahoma State 80-70
The Beavers are hot at the right time, winning eight of their last nine games, including fellow-tournament teams UCLA, Oregon, and Colorado in a row to win the Pac-12 title to earn a bid. Once in the field, they upset Tennessee before sending Cade Cunningham to the NBA with a 10-point win in the second round.
Up Next: Saturday vs #8 Loyola

Beat #2 Ohio State 75-72 (OT) and #7 Florida 81-78
Oral Roberts is one of three non-power conference teams still alive and may own as good a pair of wins as anyone left in the field with their performances over Ohio State and Florida. But, someone has to be last and they will be tested again when they play Arkansas in a rematch of an 87-76 Razorback win back on December 20, 2020.
Up Next: Saturday vs #3 Arkansas

The race for the @FinalFour picks back up Saturday. #MarchMadness pic.twitter.com/3HnfqJuJyZ

So rev up your engines and settle in for another wild ride as we settle in for eight Sweet Sixteen matchups that will set the stage for the Elite 8 matchups to see who will eventually land in the Final 4 as we get closer to crowning a champion.