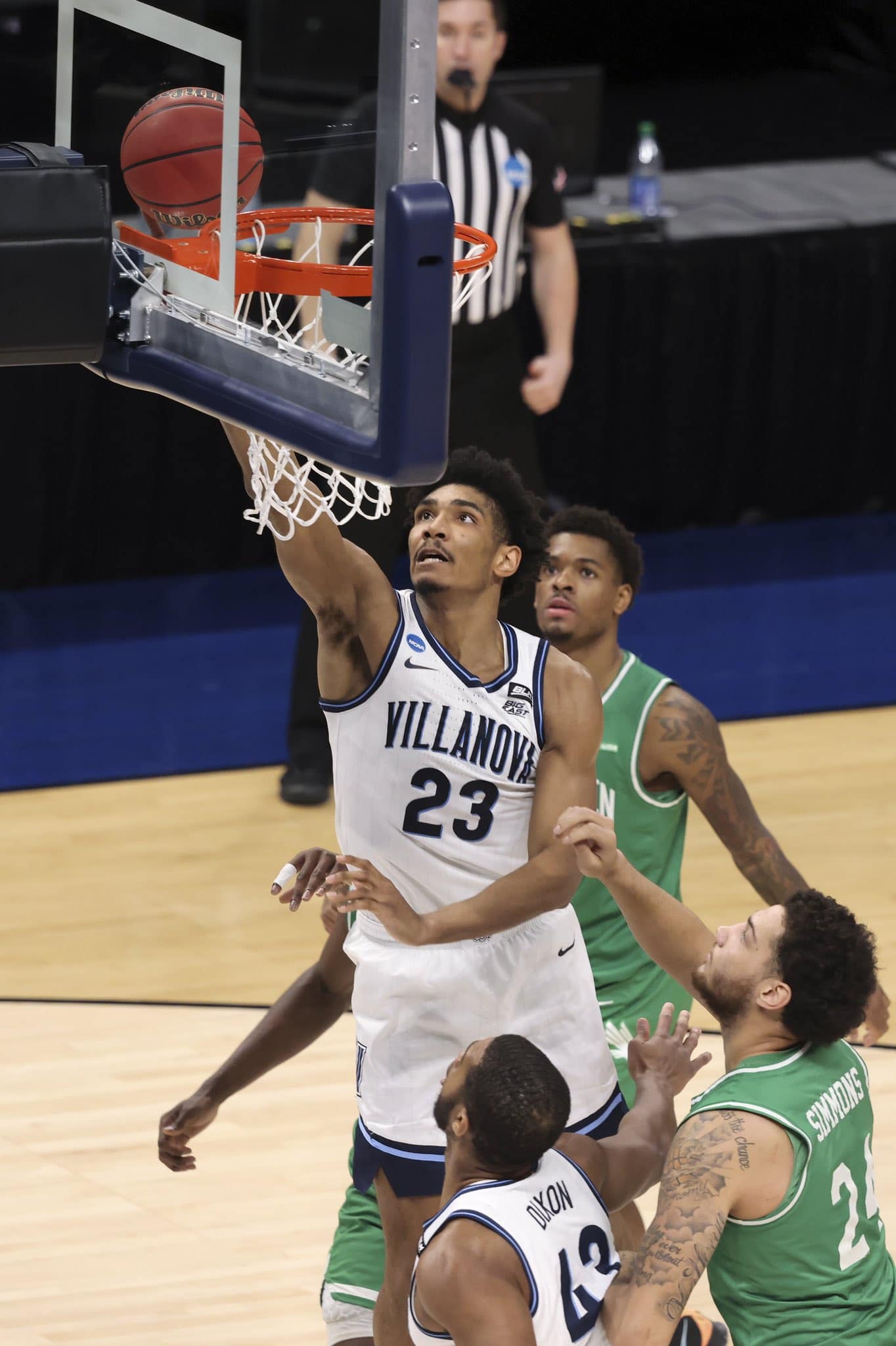 Indianapolis, Indiana – Villanova looked like some of its previous historic national championship-winning teams against awe struck North Texas team as the Wildcats hit 15 3 pointers on the way to a huge 84-61 victory and a place in this year’s Sweet Sixteen. Jeremiah Robinson-Earl led the way for the fifth-seeded Wildcats scoring 18 points and Jermaine Samuels Jr. added 15 as well.

The Mean Green of North Texas played like their team name jumping out to a 21-13 lead and gave people the idea that another upset could be in the making in a tournament that has been full of shocking surprises.

The Wildcats, though, came out and locked down on the defensive end. Combined with an offense that started moving the ball at a much better pace and getting some good pitch outs off of their dribble-drive and spacing, the Wildcats began moving the ball and throwing in shot after shot from downtown Indianapolis. All in all, Villanova finished 15 for 30 from the perimeter…. an all out air attack by college basketball standards.

The Wildcats were a deer in the highlights when they lost one of their team leaders, point guard Collin Gillespie, to a knee injury late in the year. Now it seems that the team has picked up the pieces and dedicated the rest of their season to their fallen leader.

Villanova has inserted Chris Arcidiacono, younger brother of Ryan Arcidiacono who was the MOP of the 2016 Final Four, into the lineup and while he isn’t expected to carry the load the Wildcats are hoping he can help bring back some of the magic off that run to the title not long ago. With Jay Wright leading the way and the Wildcats playing at the level they did against North Texas, the Wildcats might have a great shot at another great tournament upset… the Baylor Bears.

Mean Green Head Coach Grant McCasland couldn’t be too disappointed with his North Texas team. The Mean Green were predicted to finish in seventh place in Conference USA and played lights out to come out with a conference championship…… not to mention a win in the NCAA Tournament over the Big Ten’s Purdue Boilermakers.

Next year, the Mean Green will lose four starters from this year’s team including start scorer and playmaker Javion Hamlet. The starting lineup did all of the scoring for North Texas against Villanova but the bench is full of potential as Coach McCasland has a chance to win another C-USA championship but it will take a lot of player development. A challenge that Coach McCasland seems ready to take on.

That Big East magic might still be alive. Jay Wright has been The Magician of the Big East. Right when you think he may not have a shot at finishing up with a good year and adversity hits…. he pulls a rabbit out of the hat. That rabbit that he pulled out tonight was the Villanova Wildcats making another trip to the Sweet Sixteen.

The Big East hasn’t seemed like the power conference it once has been as it sent only four teams to the NCAA Tournament and all of them made an early exit. All except the Villanova Wildcats. The Wildcats, who finished first in the Big East, may not have been expected to do much with the loss of their point guard and team leader Collin Gillespie. But Jay Wright’s “Next Man Up” approach has been the calling card and the Wildcats are answering in a big way.

Can the Wildcats escape the Sweet Sixteen with a victory over Baylor? If they do, the favorite to win the NCAA National Championship might be from the conference few would have least expected. A few with the exception of Jay Wright.