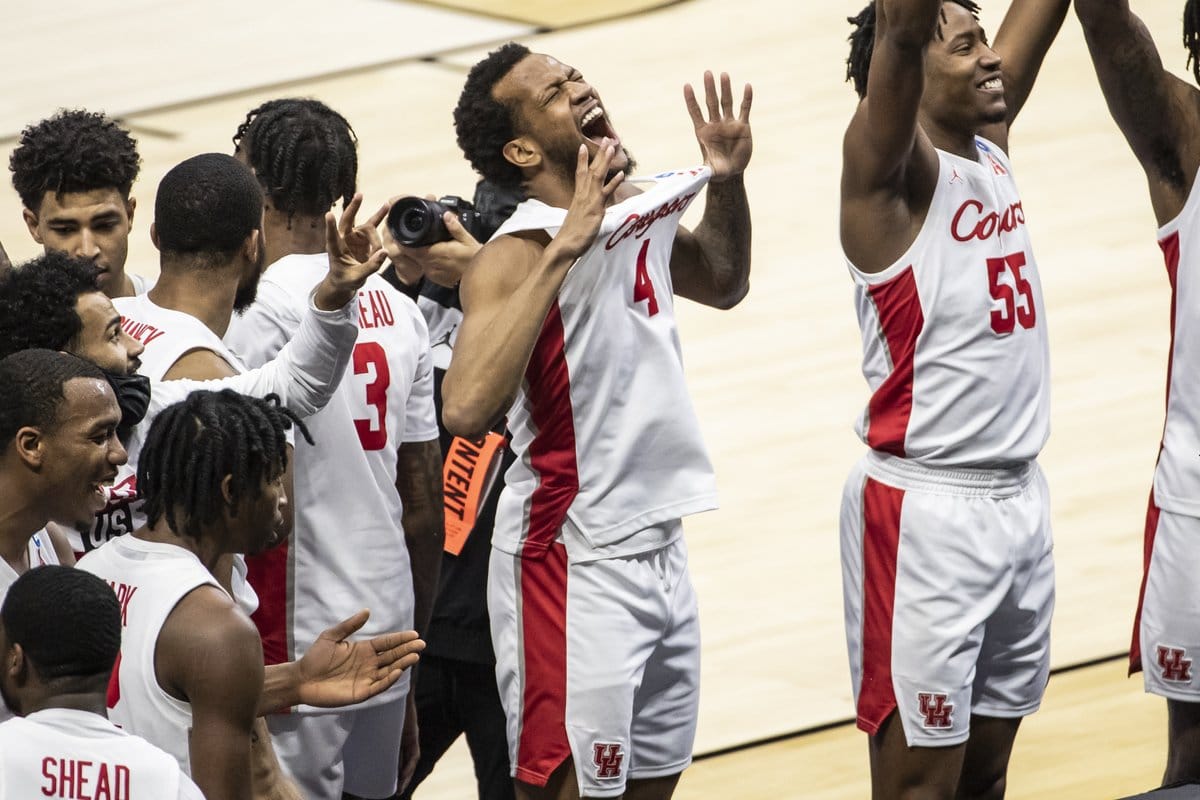 In this NCAA Tournament matchup, these two teams play identical games. I would lean to the Houston Cougars to win this matchup, but anything can happen in March Madness. Rutgers is proving that putting the moves on Houston that normally the Cougars are putting onto other teams. At the half, the Scarlet Knights have outrebounded the Cougars by one rebound. Both teams have three steals and three blocks, but Rutgers has two fewer fouls than Houston does. In this game, March Madness really shows as the leading scorer is a player off the bench for Rutgers in Montez Mathis, who averaged 8.2 points, 2.9 rebounds, and 0.8 assists. Mathis has 10 points at the half, one rebound, and one steal for the Scarlet Knights. Houston’s leading scorers at the half are a couple of more familiar names in DeJon Jarreau and Quentin Grimes. DeJon’s state line after missing most of the last game due to a hip issue is nine points, two rebounds, one assist, and one block. The shocking number here is the assists. Normally Jarreau has spread the ball and created shots for his teammates. Grimes is slightly better with nine points, three rebounds, one assist, one steal, and one block.

For most of the second half, Rutgers did everything it could. The team had a plan and executed it well, getting great looks at the basket. However, in the closing minutes, Rutgers shots stopped falling, the team turned the ball over, and Houston stepped up. Houston basketball wasn’t making free-throws but was fighting for boards and doing everything it could defensively. Rutgers numbers were significantly better than Houston’s in every way except in rebounds, steals, blocks, and points. Rutgers shot the ball better in every category and even had more assists. Rutgers shot 44.9% from the field, 43.8% from beyond the arc, and 75% from the free-throw line. Comparing this to Houston’s  37.3% from the field, 36.4% from the 3-point range, and 61.1% from the free-throw line. On paper, it looked like Rutgers won the game. It was the heart of DeJon Jarreau that really sparked this team. When he came back in, everyone on Houston’s team put forth the full effort. After a turnover, Sasser came away with clutch free-throws, Tramon Mark with a put-back, and was fouled during the shot. These two moments was the change. Rutgers couldn’t get it done. This game had March Madness written all over it. Houston escapes Rutgers to win 63-60.

Them boys just showed a lottt of heart https://t.co/JBUDIrgqh7

In this March Madness matchup, the two teams are known for their defense. Rutgers Scarlet Knights definitely came to play defense after going down seven early. The intensity stepped up and really bothered Houston. For Rutgers to maintain its half-time lead, 30-27, this will have to remain a part of the plan. On that same note, the Houston Cougars are struggling. Coach Kelvin Sampson, I am sure, will come out in the second half with a game plan and better communication. The Cougars seem to lack communication, and the Scarlet Knights have found the soft spots in this March Madness game. Both teams battling to move on to the Sweet 16 in March Madness, Houston will need to step up to move on. The Scarlet Knights need to maintain, and I would even suggest adding a press to the game. This is an issue that Houston has had in the past.

That bounce was his BFF!

Rutgers is back out in front. pic.twitter.com/WI8QfHdZ5K

Houston did the work in the second half. The team was able to just enough to win, but some of that was luck. Rutgers did an amazing job defending, but I think Coach Steve Pikiell played with the led instead of running his offense. Doing this meant that the eight-point lead Rutgers held was diminished when the Scarlet Knights could not maintain the lead.

Kelvin Sampson has led Houston to the Sweet 16 for the second straight NCAA Tournament.

Would be the third straight if not for Jordan Poole's miracle shot in 2018. https://t.co/jyrqz6Must

In the NCAA Tournament, the Houston Cougars have lost themselves in the first part of this game. The Cougars are playing into the Rutgers team’s hands. The team is putting up tough shots and taking this matchup one-on-one. This team needs to share the ball more and have better ball movement to have the open shots. In March Madness, anything can happen. The Cougars need to step up and create open shots and mismatches. Taking poor shots in the closing seconds of the shot clock, Houston basketball could have serious issues. Rutgers is doing a solid job as the team forces it in and gets to the foul line. The Scarlet Knights shoot over 40% from the field, from 3-point range, and even in free-throws.

Luckily for Houston in the second half, Quentin Grimes added 13 points in the second half, and DeJon Jarreau added eight points. Grimes finished with 22 points, nine rebounds, one assist, two steals, and one block. Jarreau finished with 17 points, five rebounds, two assists, and one block. Finally, the biggest help came from Fabian White, who scored all seven points in the second half and two rebounds. March Madness is full of upsets and heartbreakers. These players put it all on the floor for this victory and to keep dancing in the NCAA tournament.

After a slow start for Rutgers, the team came out and sharpened up. The Scarlet Knights had a purpose, and it was clear the team flipped a switch. The defensive intensity came up. The ball movement and unselfish play really allowed the team to accel. If the Scarlet Knights can stay sharp and focused, this team could continue dancing in March Madness and right into the Sweet 16. Houston needs to find its focus. The defense lacked communication, the lack of urgency, and fire for the ball wasn’t apparent. The Cougars weren’t able to get as many offensive rebounds as the team normally does and is known for. Coach Sampson needs to find a spark for his team.

With March Madness’s craziness, Houston hopes to bolster the American Athletic Conference by dancing deeper into the NCAA tournament. Hopefully, with this week off, DeJon Jarreau can have his hip worked on, and this team can recover. A few players need to refocus, and Coach Sampson will prepare these players for each team as they come.

Houston will now play Syracuse in the Sweet 16. Jim Boeheim and Kelvin Sampson have a history in the NCAA Tournament: Syracuse beat Oklahoma in the 2003 Elite Eight en route to the national title.