A New Look for the American: Houston Basketball 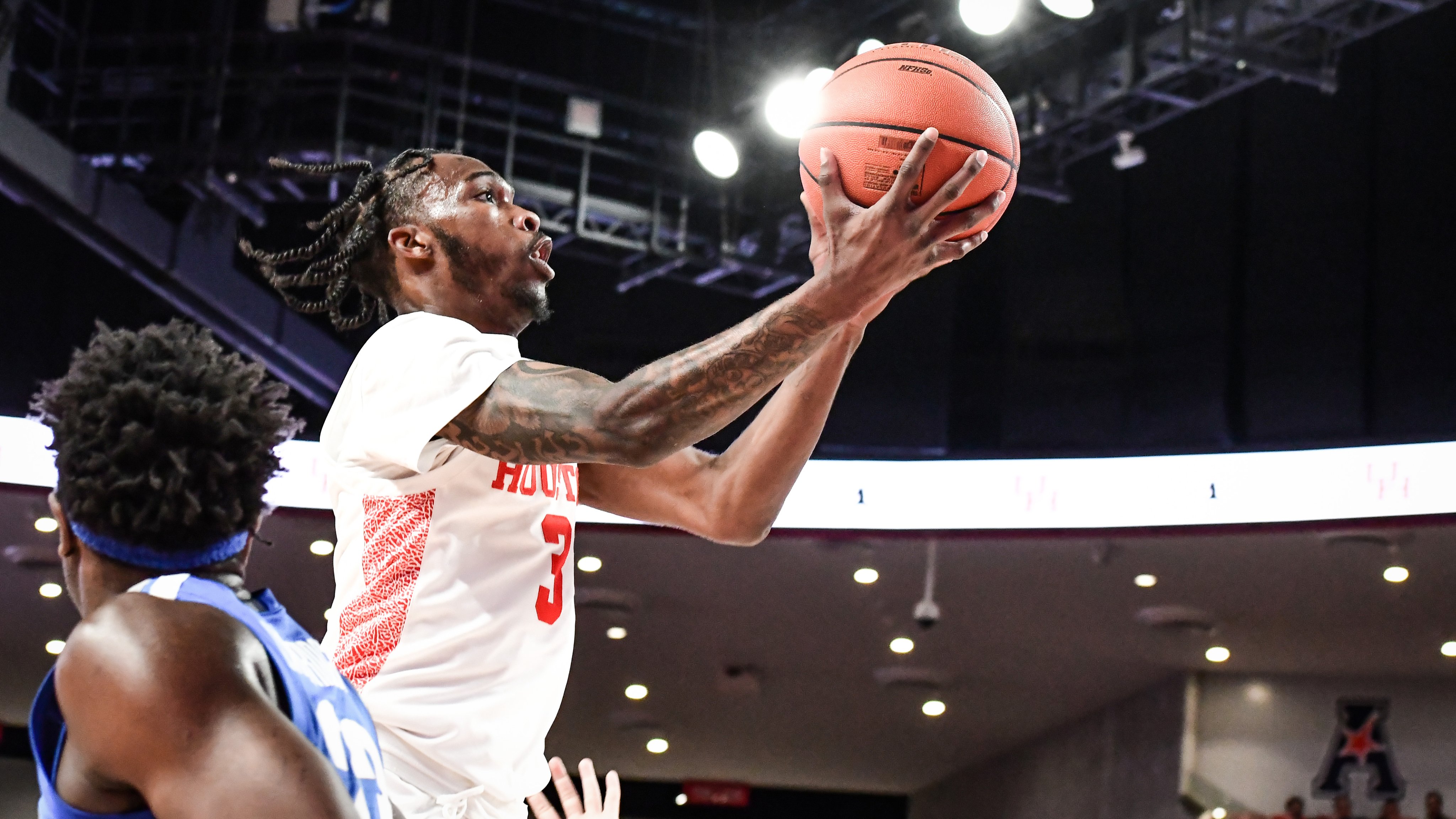 In the 2019-2020, the Houston men’s basketball team had another good year. Finishing the season 23-8 overall and 13-5 in conference play, Houston basketball was ranked the 22nd in the AP poll. With such a high rank, the team actually finished 2nd in the conference. This team has been on a tear since hiring Kelvin Sampson as the head coach. It only took 1 year for him to implement his system and mold them into his team. Since 2015, Houston basketball hadn’t missed post season play, either NIT or the NCAA tournament. The Cougar team, in the previous 2 years ,had finished 2nd in the AAC tournament. In 2018, the Houston basketball team made it past the first round of the NCAA tournament. In 2019, the Cougar basketball team made it to the Sweet Sixteen, but ended up losing to Kentucky. It would not have been surprising for this team to make it into the NCAA tournament again. With the season ending so abruptly last year, we should take a look at how the team changes for the potential 2020-2021 season.

Coach Sampson is only losing 1 player to graduation. This was a solid player for him. Chris Harris is a 6-foot-10 Center that averaged 17.9 minutes, 4.1 points, 4.9 rebounds, 2.0 blocks and 0.3 assists per game. He was also able to be effective without getting into foul trouble. If the team plays a traditional line up, the next man up is Brison Gresham the 6-foot-8 senior. He averaged 15.0 minutes, 2.9 points, 3.5 rebounds, 1.3 blocks and 0.3 assists per game for the Houston basketball team. The team also has some flexibility with Justin Gorham able to potentially play as a center. He is a 6-foot-7 forward that averaged 12.9 minutes, 3.0 points, 2.5 rebounds and 0.5 assists per game. The Houston basketball team also has a red shirt freshman from last year in J’Wan Roberts. Roberts is a Coach Sampson player. He is long, puts himself in the right position to distribute and rebound. His issue is on the offensive end. Roberts isn’t a great offensive weapon. The tape I could find on him consisted mostly of put backs, dunks and blocks. He is an asset as he has the ability to guard both forwards and centers on the defensive end.

The big shock for the team was the Houston basketball team’s leading minutes, scorer and rebounder seeking a professional career after playing 2 years in college. Nate Hinton was a 6-foot-5 guard that averaged 30.3 minutes, 10.6 points, 8.7 rebounds, 1.4 steals and 2.0 assists per game. He has signed with an agent and while it does not look like he is going to play in the NBA, he will likely play professionally overseas. The other player that tested the waters was senior guard DeJon Jarreau. Jarreau is a 6-foot-5 guard that averaged 23.1 minutes, 9.0 points, 4.3 rebounds and 3.7 assists per game. In early July, he decided he will return to Houston basketball team for his senior year.

The rest of the team did not stray from Coach Sampson and Cougar basketball. The team has quite a bit of depth at guard with 5 returning including a player that sat out last year due to transfer. The first player, Quentin Grimes, led the guards in minutes. He is a 6-foot-5 junior guard that transferred from KU in 2019. He averaged 27.9 minutes, 12.1 points, 3.7 rebounds and 2.6 assists per game. The next player is a sophomore in Marcus Sasser. He is a 6-foot-1 guard that averaged 23.8 minutes, 8.1 points, 2.4 rebounds and 1.7 assists per game. Finally, the last active returner is Caleb Mills. He is a 6-foot-3 sophomore that averaged 22.5 minutes, 13.2 points, 2.6 rebounds and 1.1 assists per game. Mills was limited last year because he had some ball handling issues. This year I think he takes a step forward in every aspect of the game as Coach Sampson seems to bring out the best in his players.

The only player to redshirt was a face on the bench last season. Cameron Tyson is a guard from Idaho that transferred and sat out. He is a 6-foot-2 sophomore that while at Idaho averaged 25.4 minutes, 13.5 points, 1.9 rebounds and 0.8 assists per game. He is someone who can be a rotational player, but needed a year to learn the system and work on his ball handling ability as his first year he was turnover prone. Tyson is a shooting guard that shoots over 40% from 3 point range. His mid range game, decision making and ball handling are some areas that he could improve.

The first player is a 4 star guard.  Tramon Mark is a 6-foot-4 shooting guard. His senior year, he averaged 29.3 points, 6.4 rebounds, 3.7 assists, and 2.2 steals per game. Mark was able to disrupt passing lanes and was able to average 0.8 blocks per game. He is very gifted offensively.  With his length, Mark has the potential to be able to defend against even bigger players. Mark can create space, change tempo, and finish at the hoop. Looking at his tape, there were limited video of him on the defensive side of the ball. He has length and good footwork. With Coach Sampson’s help, Mark has the chance to learn how to be a good defensive player.

The next incoming freshmen guard is Jamal Shead. He is a 6-foot-1 4 star point guard. Looking at his stats, I would not be surprised if he was a redshirt option this year. In high school, he averaged 18.1 points, 6.0 rebounds, 3.9 assists, 2.7 steals and an unfortunate 4.2 turnovers per game. Shead is a great distributor and willing to pass out of situations. From what I saw, he often tried to do too much, dribble out of situations instead of passing out of them. With some time to learn and develop, Shead can get a better vision and better understanding of the game. He has the ability to score from anywhere on the floor.

The final incoming freshmen is a 6-foot-9 3 star center. In high school, Kiyron Powell averaged 10.6 points, 3.3 assists, 10.9 rebounds, and 6.8 blocks per game. While he is known for his dunking ability, he has a mid range game that has includes a soft touch. Powell’s length and bounce allow him to have the ability to protect around the rim. He can block and change people’s direction due to his size. Powell is a nice addition to the team and provides the size that they need. He will need to work on his footwork, body control and when to be aggressive.