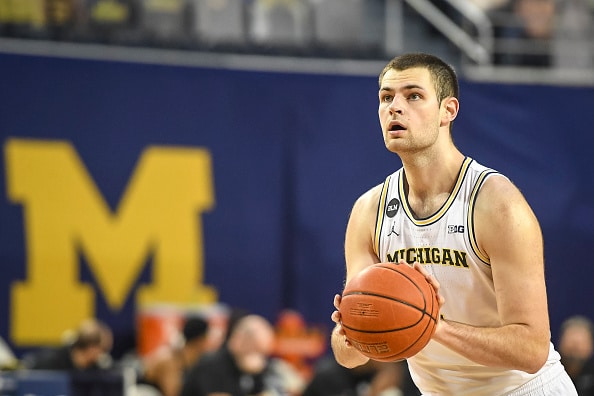 West Lafayette, Indiana – Its not been that long since we had a #16 seed upset a #1 seed in the NCAA Tournament. Michigan made sure that it did not happen for at least another year. The power from the Big Ten proved worthy of their number one seed and showed why they are a major threat to win the national championship in 2021. Behind the length of their front court, led by 7’1 Hunter Dickinson and some savvy guard play, the Wolverines looked sharp under the guidance of their Fab Five coach Juwan Howard as they wore to wire leading by as much as 22 and gaining the victory over the Tigers of Texas Southern 82-66.

1.) The Wolverines Are A Major Threat To Win The National Championship

Led by 7’1 Hunter Dickinson and 6’8 Brandon Johns on the inside and with the guard play of Mike Smith, Eli Brooks and 6’9 guard Franz Wagner from Berlin, Germany… the Wolverines are long and athletic and will be a problem matchup wise the deeper they go into the tournament. The Wolverines led Texas Southern by twenty points or more for the majority of the game. The only flaw of Michigan’s that was noticeable was in the second half. At the beginning of the game, Michigan Basketball came out strong and played with energy in such a way that it looked like it might be a blowout early. In fact in the the second half, the Wolverines seemed very complacent as their energy level was not as strong as the first half. The Wolverines threw some errant passes that were very careless and forced some shots at the basket without using some clock management during their possessions allowing the Texas Southern Tigers to chip away at the lead and cut it to 12 points with just over three minutes to play. Much of that could possibly be contributed to the Wolverines looking to play some extra people and working on a 2-2-1 box press against Texas Southern in preparation for their next opponent in the second round. Needless to say, Michigan has the talent and skill to go far and win a national championship in Indianapolis. The main thing for them is to not let bad habits creep into their play that could carry over into a game that really matters deep in the tournament.

2.) Texas Southern Will Be In The NCAA Tournament Next Year

The Tigers, while down most of the game by twenty or more points, showed no quit and all fight as they battled the #1 seed Michigan Wolverines all the way to the buzzer. Senior Michael Weathers led the way for the Tigers with. points. While Weathers is a senior, the Tigers will return three starters next year including 6’9 forward John Walker who should be vastly improved and should be a strong force for Texas Southern in the SWAC Conference as they contend for another SWAC Championship. Walker played very strong on the interior for Texas Southern as he defended 7’1 center Hunter Dickinson who fouled out with two and a half minutes left in the contest. While the Tigers ended up losing by 16 points, the experience gained during this years tournament playing a possible future national champion will be invaluable as the Tigers make another run toward the national tournament next year.

3.). It Could Be A Big Ten Final Four In Indianapolis

Yes.. it is true. The Big Ten is no longer undefeated in tournament play. Yet.. at the time of this writing they still have five of their seven teams still left alive with Maryland and Iowa still left to play this evening. Could we see a Final Four consisting of Michigan, Illinois and Iowa? Anything is possible. The Big East once sent three teams to a Final Four in 1985 when Villanova, Georgetown and St. Iohn’s battled with the Memphis Tigers in Lexington, Kentucky at Rupp Arena only to see the Wildcats of Villanova pull the major upset over the Hoyas of Georgetown in what was seen as one of college basketball’s greatest games. Could the Big Ten pull off such a feat? The only major foe facing the Big Ten are the contenders from the Big 12 Conference. Time will tell in the next two weeks and show exactly if the Big Ten or the Big 12 was everything the critics said they were. But as of now, the Big Ten is primed to put on a performance for the ages.